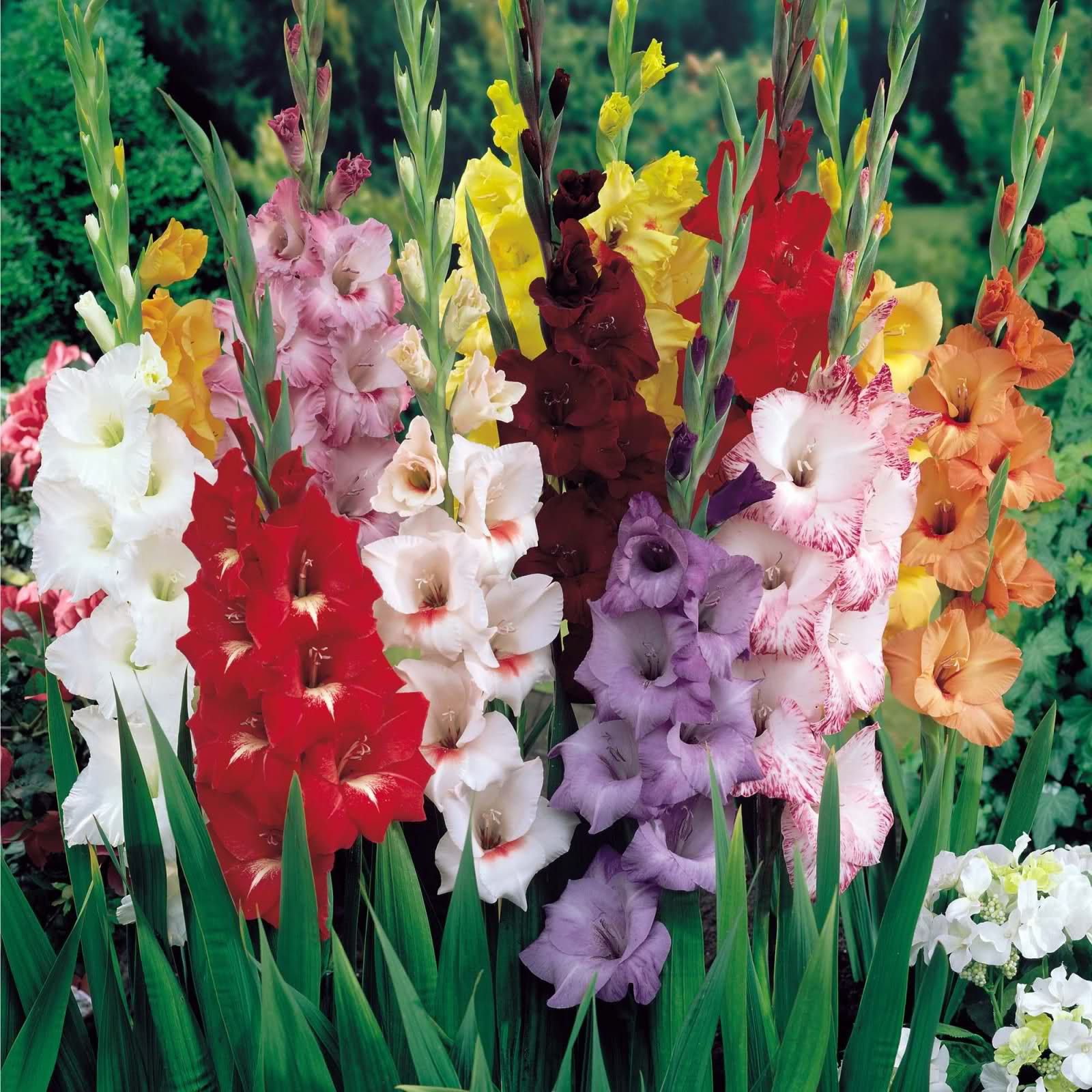 The name of the plant translates from Latin as "sword" or "sword". This corresponds to the outward appearance, in ensiform leaves, with a bit of imagination, you can see the silhouettes of this fearsome weapon. Vernacular names of plants – "king of victory", "great duelist". Legend has it, in gladiolus swords became prisoners of soldiers-Thracians. Certain types of inflorescences can reach a half meter length, painting – various, breeders almost every year present to the audience new varieties. At the moment it is known them more than ten thousand.

Culture perennial, but not hibernating, propagated by seeds and corms. The first step novice grower – the acquisition of quality planting material. Better to choose several varieties with different flowering time. Pay attention to the size of the bulbs: if the bottom of a small, they are young, Mature specimens can reach a diameter of ten. Of purchased planting material should be free of mold and rot.

Think through the range

Before buying bulbs, you need to decide for yourself, why would you want to plant gladiolus, some of them will be designed for cutting, and what will be included in the landscape composition. Both cut plants plant separately, for this purpose you can use the darker part of the garden or vegetable garden. Gladiolus, who will be the soloist in the landscape, must carefully choose. Culture is divided into two very large groups: melkotsvetkovye and large -.

The most luxurious varieties, which will look good in mixed borders. Most often, they were the second "floor". 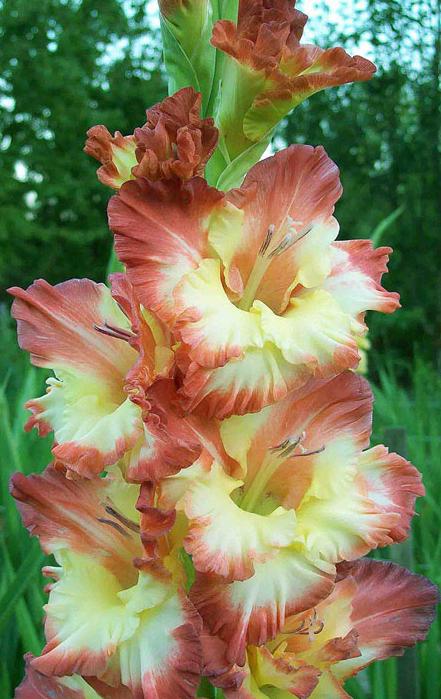 Gladiolus, the sort of “Claudius”.

Appeared in our gardens relatively recently. They are modest and below, this is what makes the data culture is user-friendly and versatile material for the creation of traditional clumps in the flower garden, and for the local composition ephedra and stones, for large rockeries, for container landing. Low plants can be placed so, so the soil underneath remains open. His ugliness can be masked with gravel, chips, walnut shell.

Pozdnerimskoe plants have another drawback: under the action of wind and rain curtain might fall apart. Experienced growers put gladiolus between the dense and sprawling the spirea, barbarism, that could keep the heavy stems of neighboring cultures. High floral "sword" is necessary to tie, perennials can be masked not too good pegs and strings. "Strengthen" fragile stems of gladiolus annuals, which can be planted directly between bulbs.

The types of small-flowered plants

Grows in European meadows, in the Northern part of Italy, The Balkan Peninsula, sometimes found in Belarus. The stem is thin and weak, height – to 60 cm. Flowers – dark purple. Used the rock garden, in plantings around artificial reservoirs. Corms are planted before winter, in the cold period shelter. 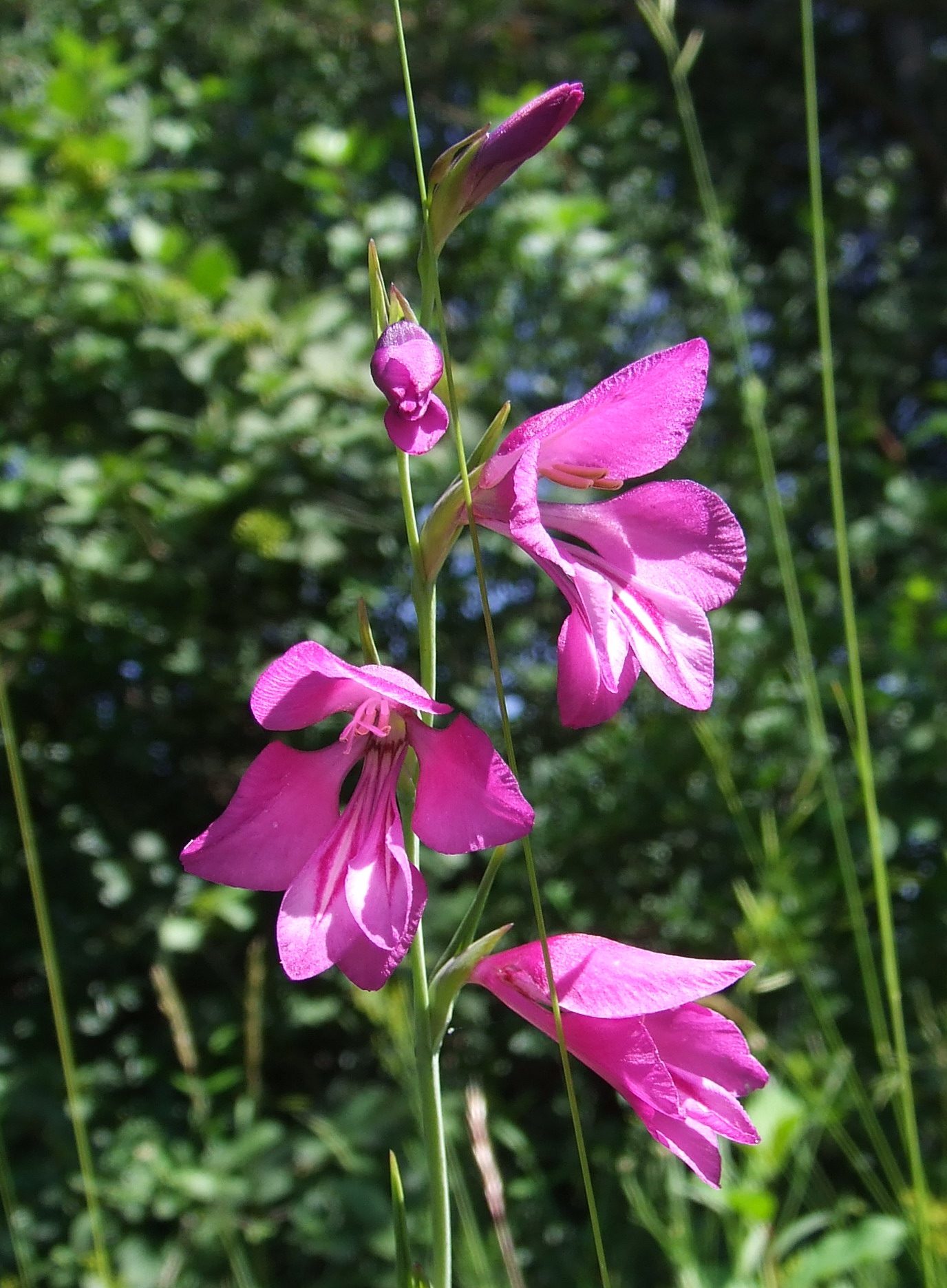 Grows in the Mediterranean, in Turkey, Syria, Iran. Prefers forest edges and meadows. Stem – thin, to 60 cm, the flowers are quite large, up to five or six centimeters in width. The color purple or raspberry, by the Central vein is a white line. Blooms in summer. Culture forms the brown seeds lionfish.

The plant prefers wet subalpine meadows, located at an altitude of up to 3000 m, the locus – Afghanistan, Iran, Southern Transcaucasia. Stem thin, but durable, flowers – dark-purple-purple. Blooms in the spring, forms seeds, gladiolus recommended for mixborders and ridges.

Place of habitat – forest and subalpine meadows, located at an altitude of up to 2000 m. The plant can be found in Asia Minor, in the Caucasus, in Iran, The Mediterranean, in southern Europe. Stem up to a meter in height, flowers light purple with a white stripe. 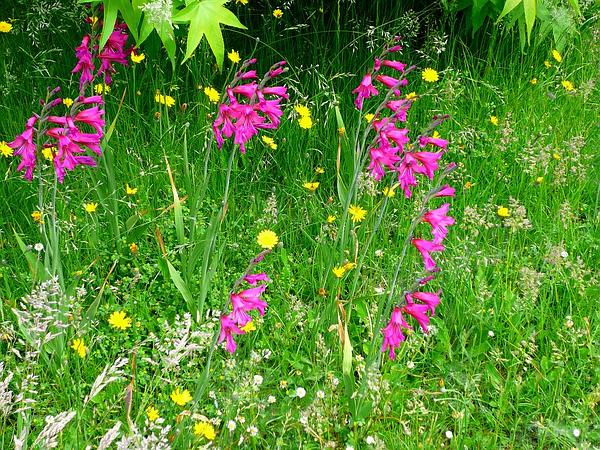 Prefers dry meadows and shrub thickets in Eastern and Central Europe, in the Mediterranean, in North-Western Kazakhstan. Stem up to two feet in height, the perianth is dark purple and purple-red. Blooms in early summer.

Land any, but it is better to use a sandy loam soil, containing large amounts of humus. If the ground is clay, then it is necessary to add sand.

For the selected area in the fall entered the humus and lime. The area for planting needs to be closed from the North wind and a flood-lit throughout the day. Flowers have long roots, able to penetrate deep into the ground, for this reason, it is necessary to dig into two of the bayonet. It is desirable to make fertilizers and do not use manure, it can serve as excess foliage, in this case, the bad bulb will survive the winter.

Three weeks before planting is necessary to properly prepare the seed material. The bulbs are soaked in a solution of trichlorfon based 20 g in a bucket of water, then they shift into a solution of manganese: 1 g in a bucket. Each soak should last at least half an hour. The beds dug over again, level, fertilize ammonium nitrate, sulfate potassium, double superphosphate, you can make wood ash at the rate of 40 to 60 grams per square meter. 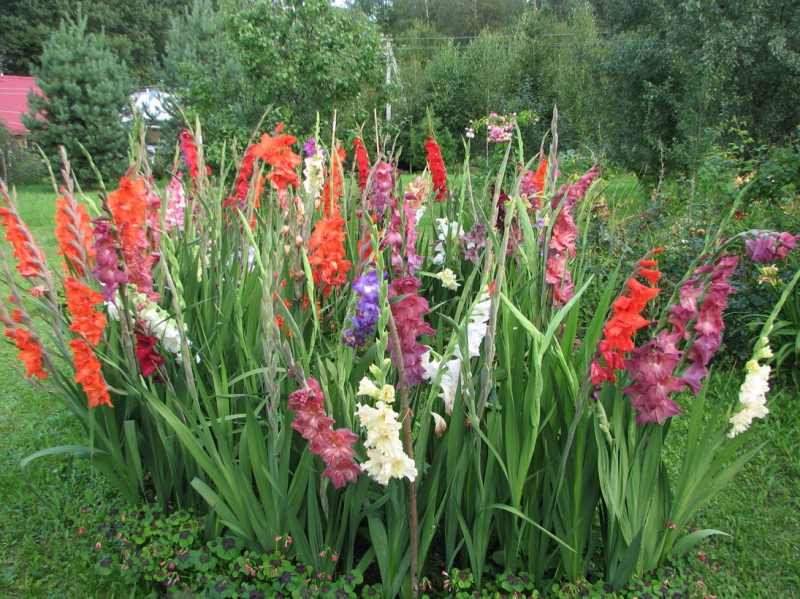 Choosing a place to land, experienced gardeners take care, to bed was oriented from East to West. The duration of the works in the middle lane – the first half of may. Before putting the bulbs in the ground with them and remove dry scales, cut out the affected areas, the slices fall asleep crushed coal. Gladioluses the bulbs are planted on average depth 10 cm.

The depth of embedment affects the quality of the earth and the age of the corms. On light soils the planting material should be placed in 10 – 12 cm, on loam on two to three inches above. Small tubers are arranged in five to eight centimeters from the surface, "kids" – two to three inches. The temperature of the earth cover should be at least ten degrees. After planting a bed sprinkled with humus or peat is two to three centimeters. Distance between plants – 20 cm.

Through 20 days you should see sprouts. After, as it happens, culture needed weeding and hoeing, abundant watering. As soon as the second piece, soil loosening stop.

The culture needs feeding during the growth process. In the first month in the ground make a urea solution, in the flowering period – nitrophoska is based 30 g in a bucket of water, after flowering – a solution of superphosphate: 15 g in a bucket. First time, feed the plant after the appearance of the fourth sheet, the second after the sixth, third – before flowering. In mid-August, the feeding is stopped.

Gladiolus are sensitive to lack of irrigation, this is especially noticeable during the formation of buds and the emergence of the second tier of roots.

In the second half of September, the bulbs are dug and washed, then placed in a solution hlorofosa, potassium permanganate, dried and stored in a cool place.

Gladioli are not planted for two seasons in a row at one place, plants will get sick. It is better to avoid plots, where previously grown asters and Phlox. All these cultures have similar fungal diseases. The most suitable predecessors – bow, garlic, cucumbers and strawberries.

Gladiolus – like one of those times, when prevention of diseases and pests. The spread of poorly treatable disease contributes to ignorance of the basics of plant protection and improper agricultural. Adverse weather conditions and increased saudinet plants can negate the horticultural efforts for the whole year – will be planting a fungal disease in a few days.

Excess salt content in the soil causes death of root hairs. Through the dead tissue, the pathogens can easily penetrate deep into the follicle. Not in the flowering period of overfeeding the culture with nitrogen, the increased intercellular spaces in root tissues also facilitates penetration, as bacteria, and fungi. Autumn excess nitrogen in the soil extends the process of growth of gladiolus, this noticeably reduces the quality of the bulbs, who may not survive until spring. Potassium fertilizer increases the plant resistance to weather and diseases of, this contributes to copper, zinc, manganese. At the same time with fertilizing with nitrogen is necessary to make copper.

Important factor in preventing deep digging of the soil before planting: spores of harmful organisms descend deep into the earth and die there. Before the gladioli in the selected area, besides the above vegetables, it is useful to grow nasturtium, mustard, calendula. Before planting bulbs inspect. On the plantation or in the flower garden and remove weeds in time, carry out watering and soil loosening. Timely feeding increases the protective properties of the plant. Late harvest "help" to get more sick material. "Kids" for the landing to take only healthy and strong plants.

For disinfection of the soil during the autumn pereopisanie watering two per cent solution of copper sulphate or a three percent solution of tizona. Calculation of liquid – a bucket per square meter of floor area. For preventive spraying Malathion used, the first treatment – end of June, intervals – two weeks. For the season, this treatment can be done three times, the ratio: 20 g of substance in a bucket of water. If near gladioli grow peonies, they are also treated with the same solution. Since mid-June, the plants sprayed with copper oxychloride based 5 – 10 g in a bucket of water. Processing must be done at least three times in a row, interval – four to five days. For control of thrips, you can use the infusion of garlic: from 100 to 200 g of crushed cloves in a bucket of water.

After digging out the bulbs dirty wash, separate "kids", cut stems and roots. Corms pour water with a temperature of +55 degrees. Exactly five minutes later the water is drained, again filled with water of the same temperature. The third time the seed is placed in cold water with a temperature of +10 degrees, replacing it three or four times. Such "contrast baths" to treat the tubers from rot and Fusarium, scab, rid of thrips and nematodes. Then pour the onions for half an hour with a solution of potassium permanganate, it needs to be sturdy enough: 2 g of substance per liter of water. After all the work planting material to dry for two to three days with good ventilation and high temperature, and then a month he must lie at a temperature +20 degrees.

Beautiful garden flower requires a considerable attention. But the result will be noticeable, gladiolus – beautiful flowers, which will adorn any garden or plot.

Photo of different varieties of gladioli 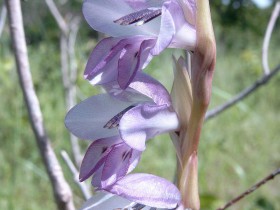 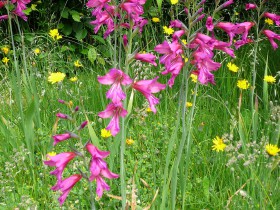 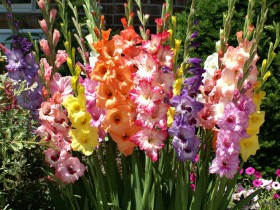 Gladiolus in the garden, composition. 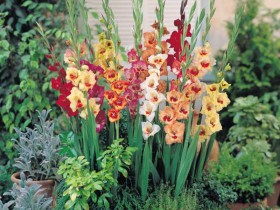 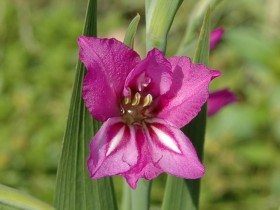 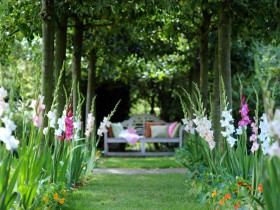 Gladiolus in the garden.