Table of contents article:
About, how to make a pergola with your own hands and how to decorate it we already talked. But in the construction phase had been missed one very important point is electricity in the gazebo. Agree, an important component of? To hold the wiring to the gazebo is not so difficult, so now we can talk again!

Preparatory works via electrical wiring in the gazebo

The first thing you need to decide, what appliances (and it, respectively, and nodes) will be in the gazebo.

The wiring in the gazebo with your own hands

The minimum requirement for a comfortable relaxing evening in the gazebo lies in the fact, what if it was light (and this light bulb and switch), and at least one outlet. As for the sockets, it is recommended to equip the gazebo, multiple power points and at least two opposite places, what would be possible not only to connect a television or radio, but to turn the laptop on charge (or phone), because. in modern life without them is to do!

Based on this, we will need the following tools:

Among the materials to create electrical wiring in the gazebo, we need:

Among all above listed materials, attention should stop at last, electric cable. Today it is customary to use either a flat wire (AR, APPV, etc.), or thin cables of circular cross-section.

The advantage of flat wire is, that they are better and more reliable than cables of circular cross-section. The disadvantage of the flat wire is higher cost and complexity in the wiring.

The difficulty lies in the fact, that flat wire badly bent, therefore, if the transaction will take place at the corner and, accordingly, turn, the external insulating sheath of the cable will have to cut on the curve. Despite this, most owners, who personally conduct electricity in the house, choose flat wire.

As for cable length, be sure to buy it with a margin of at least 1-1,5 meter, because. sometimes when there are calculation errors, the result, that cable is missing and you have to buy it and connect the pieces (I personally experienced this), and this not only degrades the aesthetic appearance, but also exposes the security to question.

It is also necessary to clarify, why do we need asbestos sheet. Its purpose is, that the wire fixation will be carried out to the walls of the wooden gazebo, that jeopardize the security of relaxing in the gazebo, as well as its safety during a sudden fire. This is where we can help asbestos sheet, which is laid between the wall of the gazebo and wire, as a short-term protection of the gazebo in the ignition wiring.

Like the highlights on the preparatory works figured out, now on to the process of conducting electricity to the gazebo with their hands.

Installation of electricity in the gazebo with your own hands

First of all, you should warn about that, in this article the option of wiring open the way to a wooden gazebo. 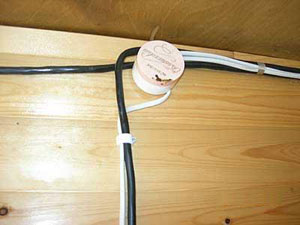 This is the easiest option, cheap, convenient and fast, and, if done carefully, a gazebo will not lose its aesthetic appearance.

So, first, you need to make a drawing, which will be specified, exactly how the wiring should be routed along the walls. Further, marker or pencil to mark up the walls, the markup will continue to keep posting.

After that, proceed to the installation of asbestos sheet, cut it into strips so, that they were on the edges of cable is not less than 0,5 cm on each side. Asbestos fasten the strips to the surface of the gazebo, they put the cable, which is fastened to the asbestos strips galvanized sheet. For even greater security (and it does not hurt), between wires and strips steel stacked strips of insulating cardboard (here, as in the case of asbestos, the gasket must protrude a few millimeters from under the mounts).

During the attachment of wires by strips of steel, be careful, that they would not strongly pressed down cable, but at the same time and did not allow him to hang out.

Please note that, many gardeners use completely unsafe variant of fastening is driven a nail between the wires of the wiring, thereby pressing it against the wooden walls. This mount not only will you ruin the gazebo, but will make the wiring is dangerous.

After, as the wires will be attached to the arbor and connected to the installation of sockets, switches, etc., assemble all the necessary elements under the existing rules.

Further, the second end of the wire (which will be connected to the mains), connected to a protective automatic (it is better to separate) and fed the cable into the network.

Here's all the wiring in the gazebo with your own hands is considered to be mounted. Work not much, but it requires knowledge of electricity, so if you have them not at all, we strongly recommend to use the services of an electrician, moreover, today they are quite reasonable material limits.

Regarding the creation of hidden wiring, I should say, that it is not necessary, because. money it will require more hassle too, and aesthetic appearance will not change much compared to the open wiring.


You are here: > MAF > Gazebos > Mounted the wiring in the gazebo with your own hands: a detailed manual for the cottager-beginner.
See more materials, related articles: