Table of contents article:
The slope at their summer cottage can be as natural, and artificial. Original decorated hill in the gardening area not only beautify the entire area, but will rest comfortably on top of it with a Cup of tea, watching all landscaped areas. The only, that creates problems in the suburban area with hilly terrain is the exposure of the hills to erosion, resulting a high green element landscape design loses its appeal and the convenience of the guests, because. the soil will begin to slide. Now we will talk about, how to protect the slope from negative influence of natural disasters, and easier to say, how to strengthen the slope with their hands!

Ways of reinforcing the slope with their hands

There are several ways of reinforcing the slope on the dacha, which do not require the help of specialists and expensive special equipment. 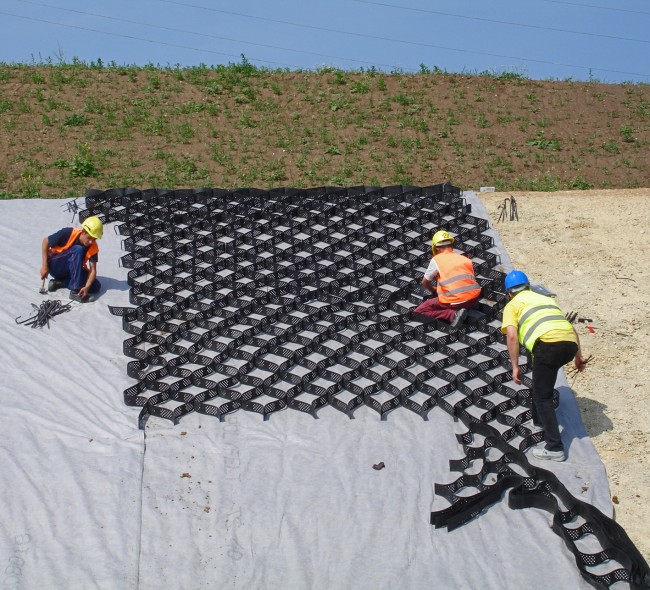 The strengthening of the slope with their hands

The first method is the so-called terracing – creating retaining walls. This method is successfully used with the past centuries and has many advantages, which are much higher than disadvantages.

The second method is more recent and represents a strengthening of the slope with geotextile. This material exists in the market not so much time, but, despite it is widely used by construction firms in different directions.

And he and the method is well suited to strengthen the slope of the suburban area, so now we more broadly consider each.

The strengthening of the slope with retaining walls 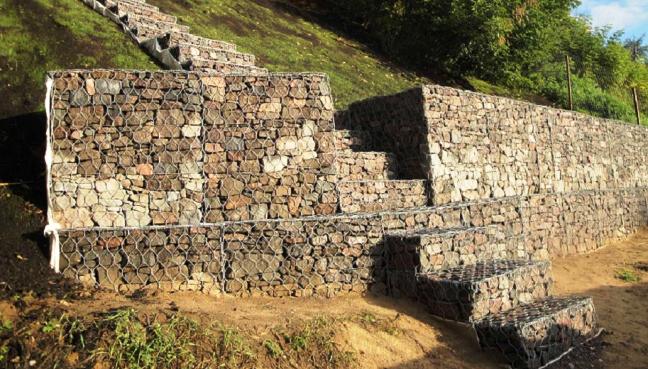 The retaining wall of gabions for reinforcing the slope

Terracing the plot is very often used in past centuries, this is evidenced by the time-worn and overgrown with moss the ancient retaining walls of various historic sites of Europe.

Today, specialists in landscape design of the site is widely used as a construction retaining walls for strengthening of slopes. This process is very simple, has high material costs and special complexity in building technology.

If the slope is small, and to strengthen it sufficiently to build a retaining wall up to a height of half a meter, all you need is to find suitable flat stones, to remove them for the layer of the earth, to create a drainage cushion and set the stones along the slope.

But if the height of the retaining wall must exceed 50 cm, the process of strengthening of the slope will be a little difficult. Here, you must create a small Foundation and the erection of a retaining wall from concrete blocks, gabions, natural stones etc.

The advantage of retaining walls is an unusual decorative ornament of a garden plot, durability design, and simple technology of creating.

But what to do, if retaining walls will not be able to fit into garden style, and accordingly in the overall composition of the garden decor? In this case it is convenient to use the strengthening of the slope the geogrid or other types of geotextiles, are invisible under lawn or other suitable decoration of the hill!

Strengthening of slopes with geotextiles 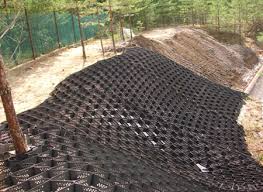 Strengthening of slopes with geotextiles

Geotextile is a planar building material in coils, comprised of a polymer or synthetic waterproof material, able to retain soil and to prevent it from slipping as a result of erosion.

Advantages of geotextile the following:

As you can see the advantages of geotextile much, therefore, to strengthen the data material slope it's a pretty good idea.

With regard to the main types of geotextiles, include the Geocell and geogrid. These materials find application not only in strengthening slopes, but in the other construction work (for example, road construction). Consider in more detail the geogrid and the geogrid, as a material for strengthening of slopes with their hands.

Geogrid is a drainage geocomposite, composed of synthetic polymer filaments, treated with a protective layer. The openings of the geogrid can range from 2,5 mm up to 4 cm. 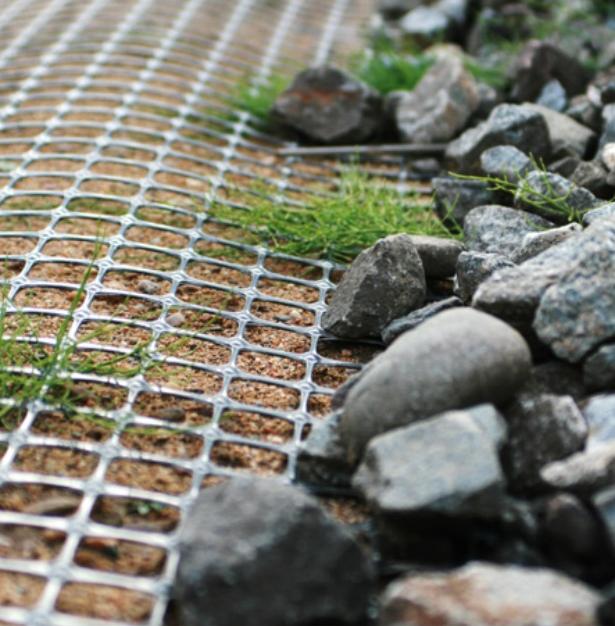 Most often, the geogrid is used to strengthen the soil on shorelines of reservoirs, slopes roads, asphalt coatings and other landscape works. It should be noted, the smaller the size of the holes geonet, the it stronger.

As mentioned earlier, the negative effect of geotextile on the environment is missing, and the strengthening of the soil occurs quite effectively. 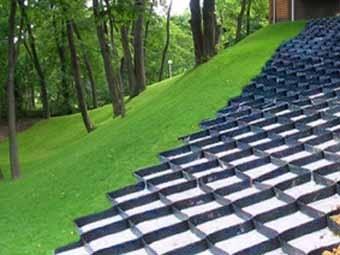 Geocell is different from geogrids, not only cell size, but material, from which it is. Geocell is three dimensional look and consists not of yarns of, and tapes (well as polymeric or synthetic).

Geocell, as geogrid have the same lifespan, which is equal to 50 years.

Most often, the geogrid is used as the top layer under the grass, as well as for strengthening the hills.

How to lay the geotextile?

We have already mentioned, the technology of laying of geotextile is fairly simple and does not take much time.

It should be noted, that it is appropriate to strengthen the slope with a slope angle of no more than 60 degrees. 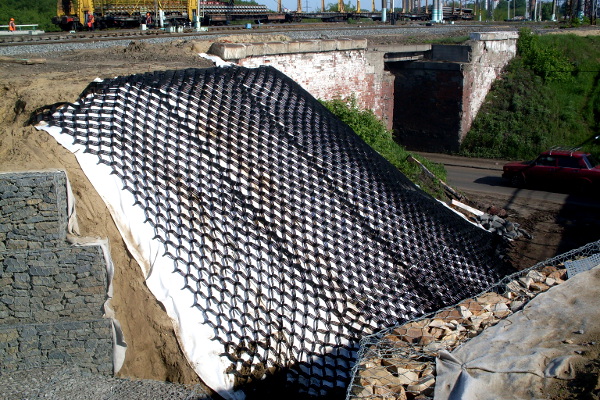 One of the unmentioned advantages of geotextile is, the material is easy to cut, so you can fit a piece of irregular shape any slope.

The first step is to level the surface of the slope, what would the geotextile carefully lay down with the earth's surface. It is recommended to remove the top layer of soil to a depth of 20-50 cm. 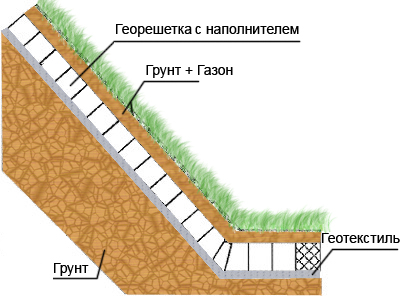 The scheme of strengthening of slopes with geotextiles

Further, the bottom should be compacted and put on it the first layer of geotextile. It would consolidate the material use steel l-shaped anchor or 20-inch metal brackets. On top of the geotextile filled pillow from rubble (you can use gravel) and again laid geotextile, don't forget to fix. On the top layer of geotextile poured fertile soil and carefully compacted manual roller.

The strengthening of the slope a geotextile is considered over, now you can create a layer of sod, that will adorn the hillside and makes the song complete. It is recommended to use a mixture of lowland peat upland with fertile soil. The prepared substrate is spread on the slope, that would have formed a pillow 10 cm. But the spread need not, direct ground, and on the pre-lined with plastic film, which protect the surface slope from the germination of weeds. You can also use the turf from the meadows (it is also called "coarse turf"), there is already at your discretion.

And finally a layer of sod thorough manual roller compacted, and the song is over.. It is recommended to use turf, which is more brightly decorate the reinforced slope!