Table of contents article:
Watering the garden is one of the most annoying works, which daily takes considerable time. We live in 21 century and now all boils down to, what would a suburban area was not a place of seasonal garden work, a cosy place to rest from city problems. What would you like more time to pay the rest, the need to reduce the time for work, therefore, this article will set out several options to facilitate hand-watering of plants.

The so-called "lazy" watering plants is a watering system, which is designed to facilitate the work of truckers. This system is very simple and requires almost no material costs, this is why it called "lazy".

We decided to provide you some of the more simple options lazy watering system, among them:

All 4 options are pretty simple, therefore, we draw your attention to the fact, so if you want them to do with their hands for no more than a few hours. Next, we take a closer look at all these options, now talk a little about more costly, but at the same time more effective way of watering plants automatic watering system. 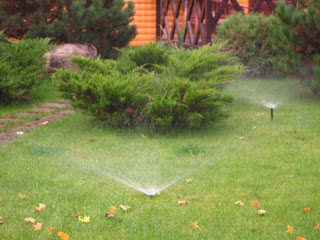 Automatic watering system plant watering kit represents the heads, valves, hoses, sensors and remote control, which carry a "smart" watering. Should such equipment to order more, but the whole system will eventually pay off, because. automatic irrigation significantly reduces water resource. More detail you can read about the automatic watering system in this article, and now back to our "lazy" glaze.

Wick watering very frequently used in watering potted plants, so I'm sure you've heard of him. Chief Executive on wick watering is a piece of cloth, one end of which is placed to the plant roots, the other in a container of water. 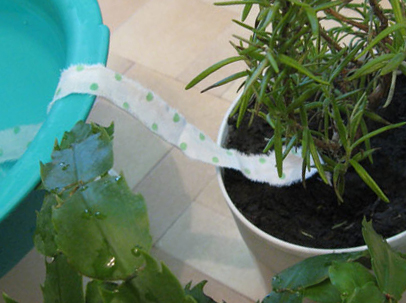 The system is very simple, but at the same time and very efficient. So, consider the process of installation more details.

Near the beds with plants bury capacity, it is best to use a plastic 10-litre bucket or even a barrel, if the bed is big enough. The tip tanks must be located strictly at one level with ground surface.

Now moving on to fabric, it is best to choose the material, which does not rot. The length of the strips of fabric you pick yourself experimentally (judging by the quality of irrigation). As for the width of fabric strips, it should be not less than 20 mm. The greater the width of the strips, the richer will be watering, so emptied the tank of water.

One end of the so-called fabric "wick" bury in the territory of the beds to a depth of 8-10 cm, the other is placed in a tank of water. There are bound to ensure a length of wick, that he'd reached the bottom of the tank.

A very important point is the length of the wick on the earth's surface, this figure should be reduced to a minimum, because. in hot weather, water will quickly evaporate from the wick and not have time to reach roots of plants, so, watering will not be. Based on this, it is also recommended to cover the water tank lid, because. the water will evaporate from the tank and you often have to refill it manually.

The advantage of this irrigation in, what plants are on their own to manage the demand of water and irrigation provided the highest quality. Another advantage is the simplicity of the method, wick watering is the most economical and easy to installation. As wick watering is good because, that allows owners to leave the country for a few days, the garden will be watered, while the vessel is not emptied.

On the downside wick watering, the most important are considered to be:

Not less easy way "lazy" watering plants, the Executive organ of which is the leaky capacitance. That would not spoil the whole bucket and barrel, better to use a plastic 2-liter bottle or 5-liter "balaski". Consider the example from plastic bottles.

Take a bottle, cut off from her upper part, but don't kick her, it is still useful. At the bottom and at the bottom of the bottle make a small hole, using the awl. The bottle is dig in the soil next to the plants 2/3 the total height of the bottle. Throughout a bed of such bottles should be several, to provide sufficient watering of plants.

Cut the top of the bottle it is recommended to use as cover, what would the moisture not evaporate in hot weather.

This and all technology of creation of irrigation leaky tanks. As you can see, the method is quite simple and again requires no cash outlay.

As for the disadvantages of this method, we can only say, that would again require manual work – filling the tanks with water, and daily.

If you compare wick watering plants and watering containers with holes, it is better to give preference to the first method, because. still have to manually fill the tanks, only here during wick watering them a little (1 on the bed), and in this case they are much more. 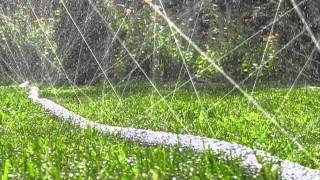 Watering holed hose on the surface

So, more time-consuming, but a simple "lazy" method of watering plants at their summer cottage. For the implementation of the watering we will need a barrel (not less than 200 liters) and hose. Barrel mounted slightly above, than the level of the earth's surface (the beds themselves). If the on-site vegetable garden hills, it is possible to make an artificial hill with their hands or to pave the hill of logs, bricks or other improvised material.

At the bottom of the barrel mount hole with adapter for hose (the market sold these fixtures, some of which even feature proabortion tap for convenience). A barrel connected to a hose, extend it to the watering place and make a hole in the hose, starting from boundaries of the first Bush to the last. To create holes you must use again the awl, the distance between the holes should be no more than 30 cm. After, as holes are created, dropped into the hose to a depth of 8-10 cm near the beds and fill the barrel with water. Perforated watering hose is established.

Please note that, one hose enough for a single bed, therefore, to ensure irrigation of the entire garden you'll need to do an extensive highway hoses, which will come from the primary hose and is divided between special tees a the garden beds.

As for the advantages of perforated irrigation hose, they include:

Well, the disadvantages include:

So, as mentioned above, an improved watering holed hose is a 3rd method, but only with a few changes. 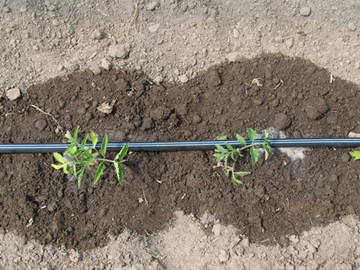 Unlike conventional perforated irrigation hose, as the source of the water we use is not a barrel, and the water. In this case, from water to bed it is necessary to hold the half-inch plastic pipe and install on the end of it, half-curled faucet.

Further, as in the previous case, create a line from a holed hose and dig it into the soil.

That's all, now the pressure will be much greater, and he watering will not require manual refilling water into the tank. This method is one of the leading options lazy watering plants.

The disadvantages of this method are almost absent, but that is minor, namely:

To modify a third way is possible and the other way is to equip the barrel with water water pump. But only in this case will have to pay not a small amount for this technique, in addition, the pump will create a large head and barrel will be quickly emptied, and 200 liters to fill by hand is quite difficult. Therefore, it is better this way not to practice.

If you used a perforated irrigation hose (or improved irrigation), then you'll appreciate the following tips:

It all, I wanted to tell about the "lazy" watering plants, I hope, that article helped you, and you use this information at your summer cottage!


You are here: > Civil engineering works > The drainage system of the garden, reclamation, watering and irrigation > Create a "lazy" watering plants on a plot: the advantages and disadvantages of different options for irrigation
See more materials, related articles: