Table of contents article:
In the summer garden ceases to be a cosy place to rest and becomes a constant hassle, associated with the cultivation of fruits and vegetables, watering the garden, the soil mulching etc. All these actions are loaded, and we, as a rule, spend a lot of effort, causing, not about what the holiday may not be out of the question. Fortunately, to date, science does not stand still and it creates more and more different garden helpers, make our lives easier. One of these assistants – country tiller, which we now discuss. 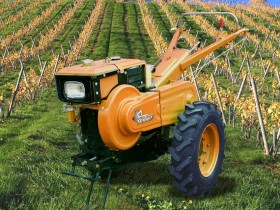 Tiller is a device, which is able to weed and aerate the ground, and compete with the other weeds. The variety of cultivators huge, prices are also different, so you can choose the desired unit is not overpaying money. Such a thing would be very useful for your garden, because. not only will you forget about the constant back pain, caused by working in the garden, but also be able to spend more time walks, reading books, swimming in the pool and other summer recreation.

Features and purpose of the cultivator

The size and weight of the cultivator are relatively small, therefore, it can be stored along with other equipment for garden. As for weight, he is from 15 kg and above. Of the main functions of the unit, isolated cutting beds, weeding of crops, hilling of plants and harrowing the soil. For additional features of the cultivator, which we will discuss later, perhaps the use of such nozzles as:

With regards to engines, we will examine a little later, we can just say, what kind of fuel can be gasoline, and electricity.

Varieties of cultivators depending on power to weight

You should choose a device based on, what is the area of a garden plot and operation conditions of the equipment (this will depend on the choice of cultivator power). The kind of country the cultivators are based on weight and engine power. There 4 types of aggregates:

These cultivators have low power (to 3 HP) and low weight (usually 15-20 kg). Their purpose is preparing the soil for the seedlings and planting on small suburban areas. Ultralight cultivators have small widths (20-30 cm) and small depth of loosening (to 8 cm). This allows you to dig up the soil in tight areas. As for fuel for the cultivator, it is a gasoline or gasoline-oil mixture. The latter option is considered more economical and creates less noise.

These units weight, of course, more, it varies 40 pounds. Engine power also increased to 4,5 HP, and the depth of loosening is 18 cm. Light cultivators attach a special nozzle Hiller, which is used for hilling plants and treatment of soft soil.

The weight of the average cultivator models ranging from 45 to 60 kg, power increased to 6 HP, ripping depth – 28 cm, and width ranges 40-85 cm. Thanks to the high performance, heavy construction and large capacity, with this unit you can handle the country the territory of a decent size. The presence of a reverse gear allows you to use the cultivator for small areas, while getting the ease of use. The disadvantage of such models is the difficulty of digging the soil in tight areas. Basically devices of this type, the kit added a small plough and a mouldboard. To increase traction, it is recommended to use a metallic lug wheels. 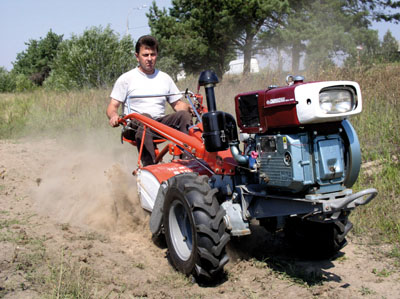 The largest cultivators belong to this kind of devices. The weight of the unit is not less than 60 kg, and engine power 6 HP and above. Such cultivators are used for complex processing of virgin soil, located within a large area. The advantage consists in the fact, that this equipment can be improved by using additional accessories, servants for watering and caring for plants. Among different functions of heavy cultivator it is possible to allocate the function of a plow and a lawn mower. This unit is equipped with a four-stroke engine, which allows you to carry loads of up to 300 kg.

Classification of cultivators according to the type of engine

The main advantage of this engine – efficiency and high environmental performance tools (because. these cultivators do not pollute the atmosphere with harmful exhausts). The disadvantage is the fact, that Assembly is attached to the power outlet, therefore, it is recommended to use electric cultivator in the garden is not large (within six acres).

Cordless cultivator is an improved kind of electric cultivators. The main advantage of such devices – mobility, because. no need for cable, which will limit the radius of operation of the unit.

Power petrol cultivators at much higher, than electric, however, the efficiency is much inferior to competitors. The lack of petrol units in volume, the engine is very often broken (due to fouling). With regard to fuel such a cultivator, it is best to "pour" gasoline A92 and A95. 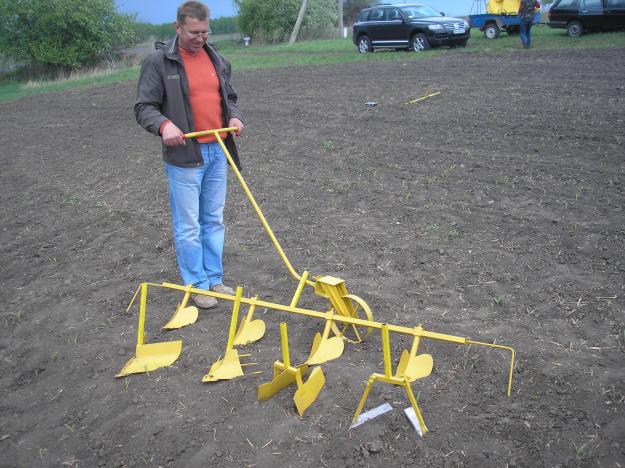 The design of the hand cultivator consists of multiple sprockets or discs. Of course, that any complex functions, the unit has no. The only thing to do is loosen the earth and remove weeds. The lightness and compactness of the device makes it convenient for various garden decorative works, such as making beds or Alpine slides.

How to choose the right cultivator?

First of all, it is necessary to give preference to those manufacturers of garden machinery, which have long been leaders in the world market. Such manufacturers include: Elitech, Champion, MTD, DDE and Texas.

So do not forget about that, it is not necessary to overpay and buy powerful cultivators, if you have a small piece of land. First of all, you should evaluate the terrain, the status and composition of the soil, the size of the territory and based on this to choose the appropriate unit, which will have the appropriate size, weight, features and fuel consumption.

Are the different types of cultivators, which are able simultaneously to prepare the ground for planting and harrow it, they are suitable for continuous tillage. Also there are models, able to feed the soil with fertilizers and at the same time to carry out inter-row work. So before you go to the market for the purchase of the cultivator, carefully review existing proposals of producers, what would, as they say, "to kill two birds with one stone". 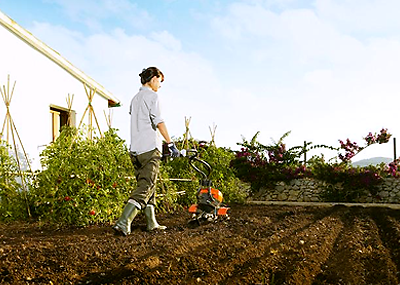 Simple to operate the tiller, even the girl

And finally, should recommend you, to account for such important features, as the energy consumption and performance. They depend on the power of the cultivator and opportunities of the working parts. In order to calculate the performance, should the area of cultivated land divided by the time, which were spent for this.

What better cultivator: petrol or electric?

The eternal debate between these two types of engines will not be left alone in wanting to buy a tiller. Advantages and disadvantages of units kompensiruet, so the choice is really difficult.

As for the electric motocoltivatore, again I repeat – they are more economical, silent in operation, so often break down and easy in use. The only negative is the attachment to the socket, although if you choose rechargeable cultivator, this disadvantage is no longer there. Most vacationers choose this unit, because. with his work he manages to "cheers", the more weight and compactness suitable for transportation.

Petrol tiller is also considered a good option for a suburban area. Cons, of course, much more, among them: great fuel consumption, the fragility of the engine, noise at work, the harmfulness of exhausts etc. The advantage is lower cost and more power of the unit.

Best to read reviews about various cultivators, and on that basis choose a device with a more positive opinion of others.

Additional equipment for the cultivator in the form of a truck

Today, there are many different attachments for the cultivator, list them all fail. The most popular are:


You are here: > Equipment for garden > How to choose a tiller for a suburban area. Characteristics units and accessories, which contribute to an even better garden care.
See more materials, related articles: