Table of contents article:
Winter is the perfect time for vacation, because. you don't have all day to care for a garden plot, but only to admire the beauty of the Christmas landscape. But there is one problem, which is so not like the residents of private homes, it represents a precipitation of snow, fallen on the sidewalks and the main alley, passing from the gate to the entrance to the house. 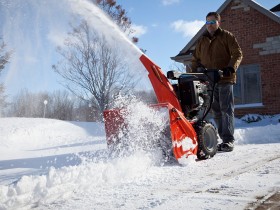 Snow tracks can be easily removed with a shovel (moreover, there is a large variety of shovels designed for snow), but this process lasts a long time. You can speed up the cleaning time tracks, and even more to make the process easy and interesting using personal snowplows, hand made. After all, the only drawback of the purchase of equipment for snow removal – its price. So let's get down to business and consider the features selection of snow plows, if you want to buy, as well as the option of creating snow machines with their hands.

The history of the snowthrower

Canada is the first country, where invented the snow thrower. The first patent on a rotary snowplow got resident Dollhouse (New Brunswick) Robert Harisu in 1870 year. The purpose of the created machine – cleaning the snow on the train tracks (by the way, called this machine "Railway screw snow excavator").

The Creator of the first rotary machine, which was published in industrial, is orange Jull – mechanic steam mill. Soon, this patent was purchased by the Leslie brothers in 1884 year, the company which "Leslie Brothers Manufacturing" carried out the production of blowers to 1971 year.

For a more sophisticated blowers – self-propelled, the inventor of such a machine is considered to be farmer Arthur Sicard. The prototype of this snow thrower was released in the winter 1925 year, then a farmer had opened a personal company – "Sicard Industries", still in existence. Snowplow Sicard popular, because. they are very efficient and reliable.

With regard to compact snow thrower for the cleaning of the private sector, the first such machine was released in 1925 year's prestigious American company Toro, which in the first year of the snowthrower sold in excess of 30000 models.

How to choose the right snowthrower?

To choose the right snowblower, need to know the existing types of machinery and their functions, what we're going to talk, having considered the selection criteria.

There are two types of transmission for snowthrower is self-propelled and manual.

Self-propelled snow plows are more complex and, accordingly, more expensive. Their purpose is cleaning snow in a large area. This device resembles a mini-tractor on crawler or wheeled. As for the engine of the snowcat – he not only carries out the operation of the equipment, but producing a torque for transmission to wheel pair, therefore, the engine power must be at least 10 HP. The price of self-propelled snowthrower equal to the price of a used car, and the production of their own hands will require significant material costs and time.

Manual snowthrower. With regard to manual snowthrower, it, unlike self-propelled, needs to be movement at the expense of your physical strength. Engine power ranges 2 – 2,5 HP, which is only enough for the actuation of actuation parts (job details). Price of this car will be much lower, than self-propelled, but do not buy too cheap snow plows, because they are likely to be released in China either unreliable firms, as a result, the service life of the device leave much to be desired. Well, because. the design of this snow thrower is quite simple, it is not difficult to do with their hands (at a later date).

The type of work tool and work principle

With regard to the principle of operation of the snowthrower, there are single-stage and two-stage snowthrower.

Single-stage snow plows are cleaning the area with a quick rotation of the working body – auger. The auger is the part, reminiscent of shaft grinder. As for working cranky screw, it is smooth and toothed. Smooth Cranko used to clean loose snow, and gear for cleaning snow mass, which managed to freeze up. 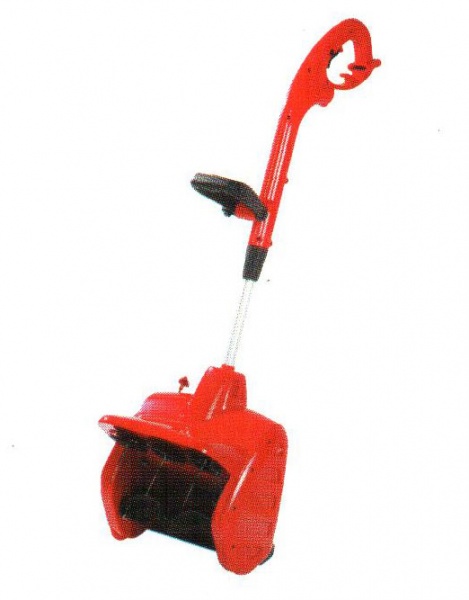 An example of a single-stage snowthrower

In two-stage snowthrower augers are paired with a vane rotor, which is mounted on the shaft in such a manner, what would the blades were in front of the screws. This design considerably facilitates the work, especially the process of entering the bucket in the snow. The material for the manufacture of the blades is plastic or metal. 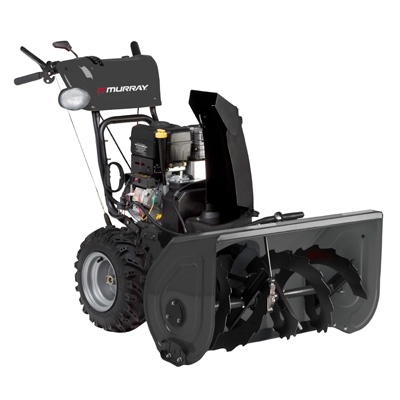 To create snow with their hands, you can choose one- and two-stage units, the complexity of building a noticeable the difference will not be. If you live on site, where snow precipitation is quite small, you will be enough to have a screw installation, if winters in your region are generous with the snow, take the time to get a rotary-screw snow thrower.

On the type engine there are electric and petrol blowers.

The electric blowers used to clear snow mass near the house. The advantages of this device is its cost effectiveness, and the lack – weak maneuverability. You should pay attention to, what in the freezing cold of the usual electric cord loses its elasticity, resulting in easily broken, so you need to use cords, which are "immune" to frost (they can be purchased in any specialty store). 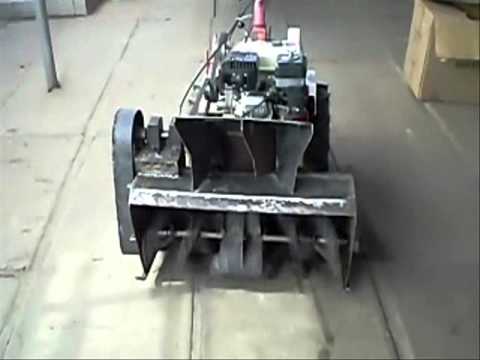 A snow thrower for the house with his own hands

As an example, we use a sample of the snowthrower, who developed the resident of the Moscow region, Sergey Khomyakov. Immediately it should be noted, this device serves faithfully Sergei already 2 season, and the future plans of the Creator – to improve the self-propelled snow thrower to. 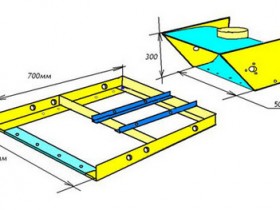 As frame with metal corner 50*50 mm. The elements of the frame are joined by welding. By the middle and end of the frame are mounted on a metal U-shaped profile (for mounting quick-release platform for the engine). To the frame the same way, attach the control arm, for this purpose bolts (M 8). Material for arms – half-inch pipe.

Motor for snowthrower will serve petrol engine from walk-behind power 6,5 PM. It is to facilitate engine repair, Sergey recommends that you install the motor on a quick-release platform.

The bucket body is made of roofing iron, Boca recommended plywood 10 mm. For ejection of snow from a bucket you should use a piece of plastic sewer pipe (diameter approx 160mm). As for the drive shaft, it needs to be made of pipe ¾ inch. Rotation of the shaft occurs by means of self-aligning bearings (for example, sealed bearings 205),which must be equipped with protective cover (suitable bearing of the propeller shaft from "Lada" 01-07 models). In the middle of the shaft should be placed a plate of metal, dimensions 120*270mm, to which will be attached the screws. As for the material for augers, Sergey used a conveyor belt with a thickness of 10mm. Skis for snow plow made of wooden beams, and the connection shaft and the motor is a gear belt.

As you can see, the difficulty in constructing a snowplow with his own hands is no. Therefore, we wish you more inspiration and patience to create such a necessary home assistant! Recommended reading as well: minisink for car with his hands.


You are here: > Equipment for garden > To choose and buy a snow thrower for the house or to do with their hands?
See more materials, related articles: