Table of contents article:
Have a garden plot, as everything animate and inanimate in this world there are "two sides of the coin". On the one hand we see the beautiful, brightly decorated with the territory, where you can comfortably relax and collect useful vegetables and fruits. But on the other hand, remember, how much trouble it was to create a whole harmonious composition? One such troublesome tasks is garbage, the resulting "podmorazhivaniya" garden, namely, branches, herbs etc. Today is very popular is the garden shredder , which we now discuss. 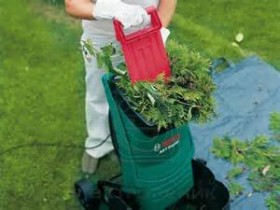 Garden shredder also called the chipper (the English version) either Schroeder (German version). Such a device will provide in order, that would be garden waste you can not just burn in the fall (as is commonly done), and be used as good soil fertilizer. This fertilizer is called compost, it is very effective and helps protect plants from various diseases and insect damage. Experienced gardeners not only crushed all wood waste from your own garden for compost, and mow the grass in the fields, which are not their property. The use of a chipper will serve in order, what would the components of the compost matured faster and was of excellent quality (loose and fertile).

The principle of operation of the chipper 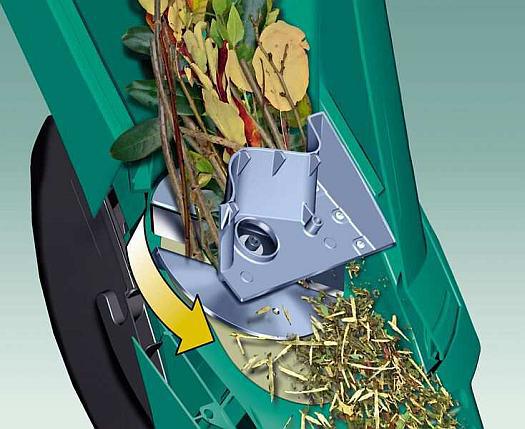 The principle of operation of the chipper

Chipper will be a very useful technique for your garden, because. to facilitate work for maintenance of cleanliness in adjoining territory. The principle of operation of a garden shredder is: when you hit twigs and grass into the hopper of the chipper, the disintegration of elements to the state of the wood chips. The work itself, reminiscent of the mechanism of action of grinder. There is no difference in principle expensive and cheap chopper, because. the difference is only in quality of components and the engine power. As for the size of garbage, with which to handle chipper, the entrance to the bunker allow the branches with a diameter of 1 to 7 cm, depending on the device class.

How to construct a garden shredder?

The main elements of the garden shredder is hopper, the shredding system and the engine. Consider all these components separately.

The hopper of the chipper an integral element of the device, because. one of the components of its purpose is primarily safety. The design of the bunker, do not expose to flowing clothes and running his hands. Therefore, even in the simplest devices, there is a protective system, which locks the device when it is turned on with an open hopper. This is the advantage of factory chiperov on homemade, which we will discuss later. The second part of the purpose of the bunker – the place of loading of raw materials for grinding. Ready sliver of wood out through the bottom hole in the bag or bucket.

The shredding system – working part of the chipper, that is, the two knife or cutter (cutter shaft). Chopper, equipped with knives, will be used for processing herbs, the stems and branches, with a diameter of 3 cm. As for the device with the cutting shaft, it will help to grind larger woody debris up to 8 cm in diameter. It is important to remember the safety of the chopper, so don't forget to wear goggles and gloves.

The engine of the chopper is, as you know, to bring the whole mechanism in action. There are electric and gasoline engines for chiperov.

Electric motors have the power to 2,6 kW. Their most productive work is done on branches with a diameter of not more 5 cm. The advantage of electric motors in, what they are less noisy, environmentally friendly, easy to maintain and much cheaper in petrol engines. The disadvantage is the relatively small capacity and attachment to a power source – wall outlet.

As for gasoline engines, they are more powerful (to 9 kW) and there are 2 types: two-stroke and four-stroke. The latter are more preferable, because. unlike two-stroke, they do not require careful observance of proportions of oil and fuel, and have cleaner exhaust and lower noise level. Petrol engines are capable of shredding branches up to 9 cm in diameter.

Another important component of a garden shredder can be attributed to the presence of wheels, which is much easier, than usual legs.

Among other functions, useful adjustment speed system grinding and the reverse for self-cleaning of knives. 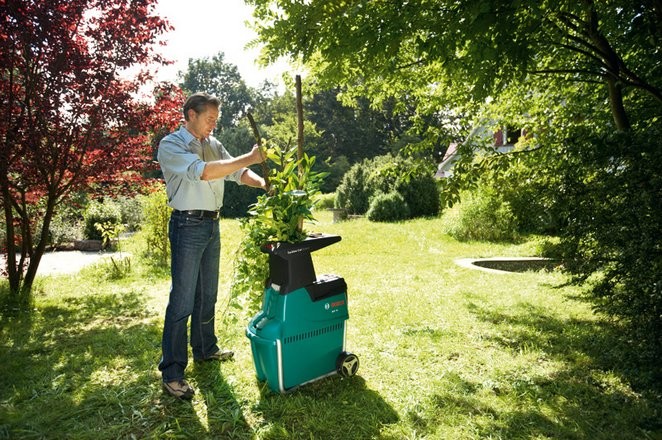 Depending on the scope of chiperov, they habitually divided into the following classes:

Amateur – have the power to 1,5 kW and is designed for shredding small branches (with a diameter of 2 cm), vegetables, foliage and grass. It is recommended to buy Amateur chippery in young gardens, because. the flora typically consists of small shrubs and trees.

Shredders middle class – have 2,5 kW engine, which can be as gasoline, and electric type. The shredding system is mainly presented in the form of a steel shaft with a cutting mechanism. Chippery of such class have the ability to drag branches into the shredding system, what makes the work safer. Such devices are recommended to buy in gardens, which have large old trees.

Professional shredders , power from 3 kW, different from previous devices have large dimensions and weight. Engine type – petrol only, grinding system – mill. This technique is able not only shredded waste, but and flatten them, forming a mulch. The environment of use professional shredders – industrial gardens.

Today, there are many enterprises on creation of garden machinery, including chiperov. Among them are the leading:
VIKING – Austrian company, which is the market leader in garden shredders. Their calling card is the bunker, having the form of a trefoil, which favors the reception of large branches without prior cleavage. Among the obvious differences are highlighted wide wheels, the function of automatic feed well, actually, the type of bunker. VIKING service centers and are located in all the cities.

AL-KO –German manufacturer of chiperov, which also has its own "chip". This feature is the special equipment of the chipper guide, which contribute to the acceleration of the feed material into the shredding system. Also, some models of chipper AL-KO can create small chips, with special design of grinding systems, includes five blades.

GARDENA – as a German manufacturer of garden machinery, which is a very high quality and durable. Chippery this company are of the, in their design equipped with two mills, used for chopping large branches.

CRAFTSMAN and MTDAmerican manufacturing company, domestic garden shredders. The models of shredders have a system of pre-cuts and the four basic knife. The original difference data chiperov is the design of the bunker (it consists of several departments, used to download different types of waste). Also pay attention to a very popular model chipper CRAFTSMAN"77638", which is equipped with a super powerful engine (as much as 11 HP), able to turn stumps into wood chips.

How to create a garden shredder with your hands?

Immediately it should be noted, today the price of garden shredder is not excessive and it makes more sense to buy this device, than to create with their hands (especially in this case, the costs can go much more). But if all the same if the reason for the creation of chopper for not saving goals, but only because of the desire to make something his own, then this lesson will not only be enjoyable, but also useful for the development of imagination.

First of all, you will need the engine. It is recommended to use the motor of a circular saw, because. his power will be enough. If in the country there's an old "circular saw", if desired, you can create a chopper on its base. For this you need to replace the disk with the cutter or cutting the shaft and top to set the bunker. All that work on the creation of a chipper at home. If you don't like the idea with the mill, then you can just spread on the shaft of the circular saw from multiple disks (there is a homemade chopper which is on the shaft about 20 saws), separated by a plastic washer, which can be done by hand.

If you have a junk motor from a walking tractor, with the help of it you can also build a nice chopper, the more, if the motor is present PTO, which can adjust the rotation speed of the blades.

In General, in the presence of welding machine, a small amount of time and scrap materials, you can create a chopper with his hands, that's only for the effectiveness of his actions no one can vouch. Therefore, it is recommended to select a chipper from well-known manufacturers of garden machinery, because their quality is proven by millions of gardeners. 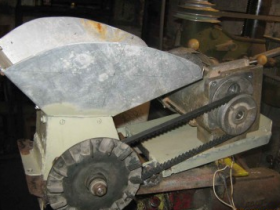 An example of a homemade garden shredder 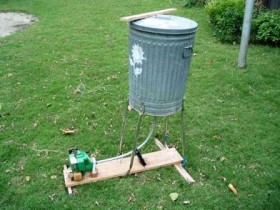 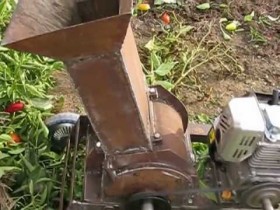 
You are here: > Equipment for garden > All about tipperah: the principle of operation, classification, popular manufacturers the option of creating your own hands
See more materials, related articles: