Table of contents article:
A traditional Russian sauna, actually as all the familiar Finnish sauna are not the only examples of areas in order, to warm up. Much earlier was invented and other types of baths, such as Therma, Hamam, lakonikum etc. Next, we consider rules of stay in these types of baths, as well as the design features all the popular baths of the peoples of the world! 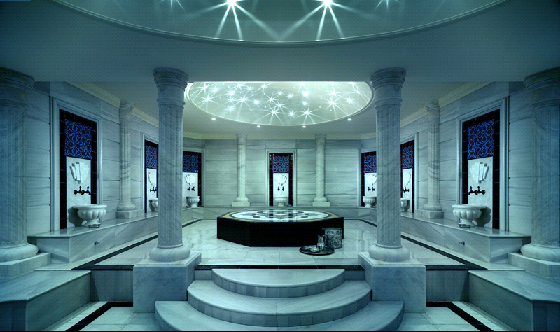 There are many controversies of the, what people first invented the bath. Many historians believe, what the founders of the bath business are the Romans and their famous baths of Therma.

Roman baths of Therma was a huge bath room with multiple rooms, each with different temperature and humidity. The Romans introduced the bath place community fees for swimming, here people talked, rested and pleasantly spent time.

Heated the Roman baths of Therma, a little unusual. The so-called oven was in the basement and heated floors and all rooms. In the hottest room temperature reached 85onWith, therefore it was impossible to walk on the floor barefoot, because. Paul was a baffle between the firebox and the most bath. Additionally, the bath was heated with a hot smoke, which passed through special chimney holes in the walls.

Once the body is sufficiently warmed up, it was necessary to go to the next, third room – calidarium. Here the temperature was approximately 70onWith, enough to relaxing in the bath. Calidarium also had a pool, but the water is on the order warmer.

Well, the last, most hot room – laconium. The temperature in the laconium has reached the maximum 85onWith, not all the campers were moved into this room. Those, who still soared in the laconium, was supposed to be in the room more 10 minutes, due to the high stress on the body.

Despite the fact, that in the Roman baths Terme provided for the pools, bathing took place as follows: vacationers Altiris oils, then washed the dirty oil water.

It should be noted, that Roman bath Thermae were decorated exclusively with marble, which evenly distributes warmth throughout the room. 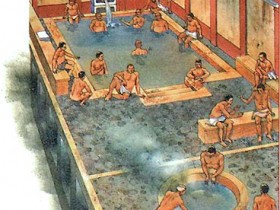 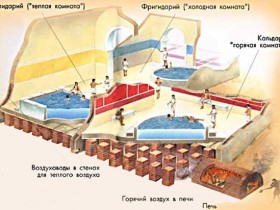 Today, the tradition of the Roman baths of Therma is not preserved, completely changed the area of the room, decorative trim, as well as the method of heating the bath. 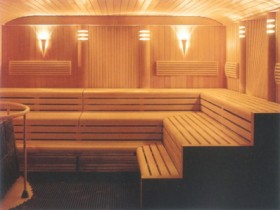 Steam in the Finnish sauna 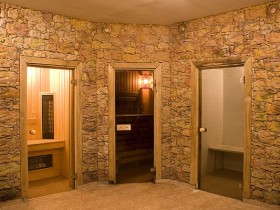 A modern bathhouse is divided into lovers of traditional Russian bath and Finnish sauna. The, the option is popular, the only difference is in the temperature and humidity in the steam room. A Finnish sauna involves heating the steam to 100-120onC and relative humidity not more 20%. About terms of use and the features of Finnish saunas you can read in this article.

Finnish is so popular, there are factory apartment model a small area.

Finish the Finnish sauna is different. Basically, a relaxation room and a steam bath sheathe lining, and washing room and dressing room overlaid with ceramic tiles. 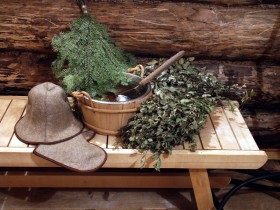 Accessories for the Russian bath 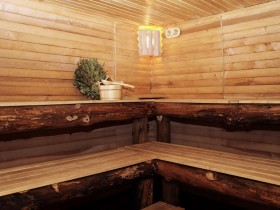 About traditional Russian bath it makes no sense to talk, all and so know her. In the Russian steam room temperature is not more than 70-80onWith, because. the humidity in the steam room a lot more (about 60%).

Traditional Russian bath accessories are brooms, which do massage at rest.

Today, there are even Hiking Russian baths with stove. This option is suitable for the true connoisseurs of bath.

A traditional Russian sauna, actually, as Finnish sauna consists of a room of rest, dressing room, of the washing compartment and the steam room.

Another difference between Russian bath and sauna is the capacity for bathing. In the bath is a small font, but the Finns prefer to swim in the pool.

It should be noted, the design of the Russian bath can be made "white" and "black". All of our usual first option, when the bath has fireplace, but professional bath attendants at least once in my life tasted a bath "on-black". This type of bath is an installation of the furnace in the steam room, and for burning all the smoke stays in the room. It is impossible to convey in words the pleasure from the proper rest in the bath "black", but at the same time to prepare such a bath will not every attendant, and the design of this bath is rarely where you will meet. 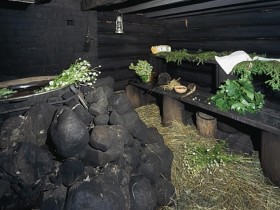 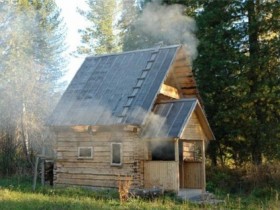 Interior steam in the Russian bath is represented by a Board lining or frame. 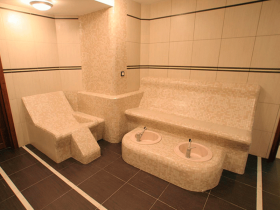 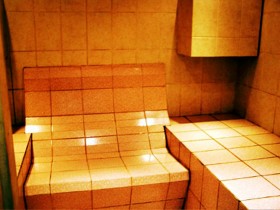 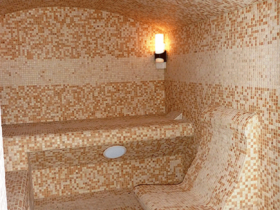 Most young invention relaxation at high temperature is a Russian bath Maslow (BSR). The present invention is becoming very popular, despite various reviews of the true lovers of baths.

Maslova Russian Banya is a steam room in the style of hi-Tek, that simultaneously combines the properties of the Turkish bath Hamam, Russian bath, the Roman baths and Finnish saunas. Because of this, the vacationer can choose individual temperature and humidity. The developers claim, what RBM is not only suitable for healthy adults, but for the elderly, pregnant women and children. The thing is, in the steam room of RBM, a plurality of sensors in different zones, that allows you to accurately control the temperature.

Instead of shelves, which are used in the traditional Russian sauna, BSR uses in the steam room a special seat, where it is convenient to relax.

Trim the BSR presented in the form of a lining of a steam room ceramic tiles. To tile presented a particularly important requirement is that the material must be free of chemical impurities.

It should also be noted, what is the optimum temperature in the region is 50-60onC and relative humidity of about 30%. However, it is possible to independently set the temperature to 100onWith, actually as the humidity within 70-100%.

Well, the last positive factor of the Russian bath Maslow, which you should know, this is, that ultra-low-cost bath and heated in an electric furnace. To date, RBM turnkey will cost you not less than 12 thousand. dollars, with an average floor space and all the necessary functional modes. 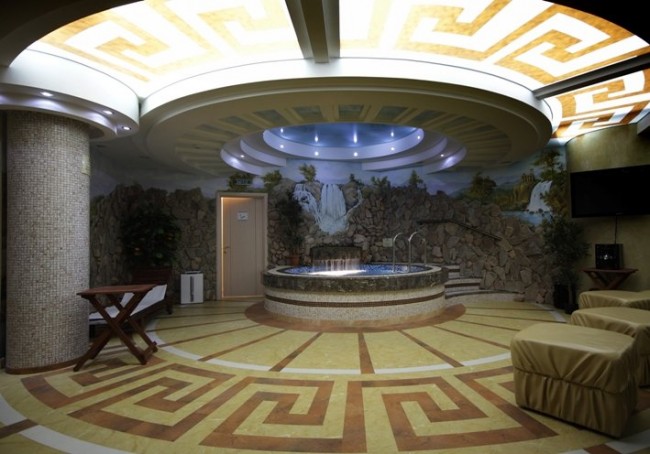 Often the bathhouse compare the Greek bath, the laconicum with a Roman bath Spa. This is due to the fact, both baths were gaining popularity around the same time, moreover, the design and decoration of baths was also similar.

The Greek bath, the laconicum was a public place, where many people gathered for simultaneous bathing. The laconicum was a room of round, because. the Greeks believed, when this form of heat distribution is most uniform.

The decoration of the Greek baths were done using marble or ceramic tiles.

In the Greek bath-house provided for swimming pools.

The process of relaxation in the Greek bath was: Greek was heated, was ostirala oil, then scraped off all the dirt with the special scraper (it could help). Further, while the body warmed up, you had to pour yourself cold water, then go swim in a pool with warm water. This strengthened the body and no harm to health, because. pressure at rest in a Greek bath almost didn't happen.

Greek bath laconium exist today in the bath centers. The optimum temperature stay in the laconicum is 70onWith the humidity 20%. 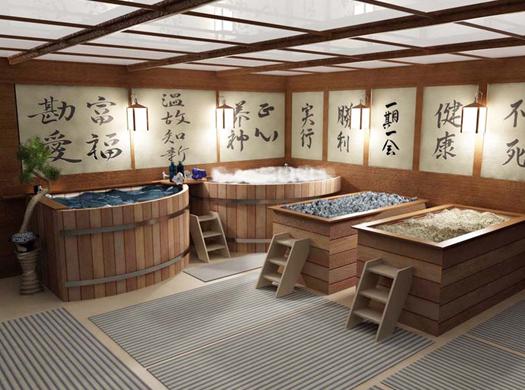 The process of relaxation in the Japanese bath consists of four stages, and the room is divided into two varieties.

First, let's talk about the types of Japanese baths: furaco and ofuro.

Japanese bath, furaco a vacation in the font, the temperature of the water in which is 50 onWith. Previously, according to religious belief, the Japanese could not use soap, because. it was made from the fat of dead animals. Therefore, in order, to cleanse the body of dirt they used a higher water temperature. First visitor to the baths had to take a shower and wash off all the dirt, then go to rest in the font. The font provided a special bench around its perimeter. Font made of durable wood: larch, oak and cedar. Heated baptismal font was carried out using a furnace, which was mounted directly under the barrel. 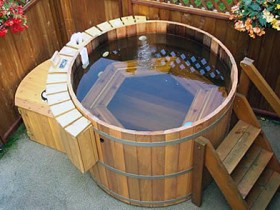 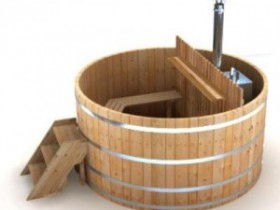 Japanese ofuro bath has nothing similar with bath, furaco. In contrast to the round font is used here rectangular boxes, filled with sawdust and small pebbles. Japanese ofuro bath – dry bath. For vacation it is necessary to lay stones or sawdust, which warms the body evenly dry heat (about 45onWith). 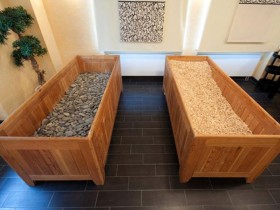 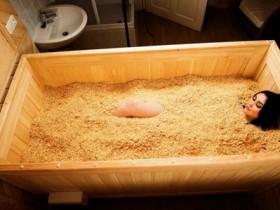 So, relax in a Japanese bath is as follows:

As you can see, relax in the Japanese bath is a bit unusual, but at the same time helps to strengthen the cardiovascular system, and also relieves pain in the joints. 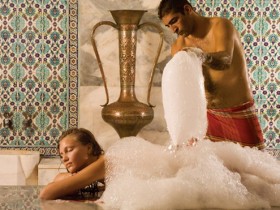 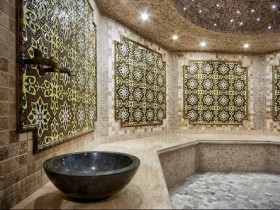 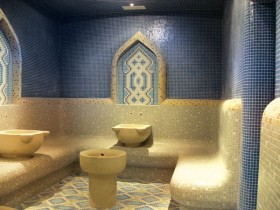 Well, the last, the least popular of the peoples of the world bath – Turkish bath Hamam. Many bath centers offer services in the form of baths.

Turkish bath Hamam also takes its roots from the Greek and Roman baths, but still has its own constructive and functional features.

The peculiarity of the Turkish bath Hamam is a low temperature in the steam room (about 45onWith) and high humidity. What would a vacationer have chosen the optimal conditions of stay in the bath Hamam provided a plurality of pairs of areas, each with individual humidity.

The process is relaxing in the bath Hamam involves heating in a steam room and further massage treatments in the main hall.

Requirements for the construction of the Hamam baths:

That's all, I would like to tell you about the most popular baths of the peoples of the world! As you can see, each nation has its own traditions, but, despite this particular vacation we all have a little overlap!


You are here: > Build bath > Baths various peoples of the world: terms of use and photo design
See more materials, related articles: