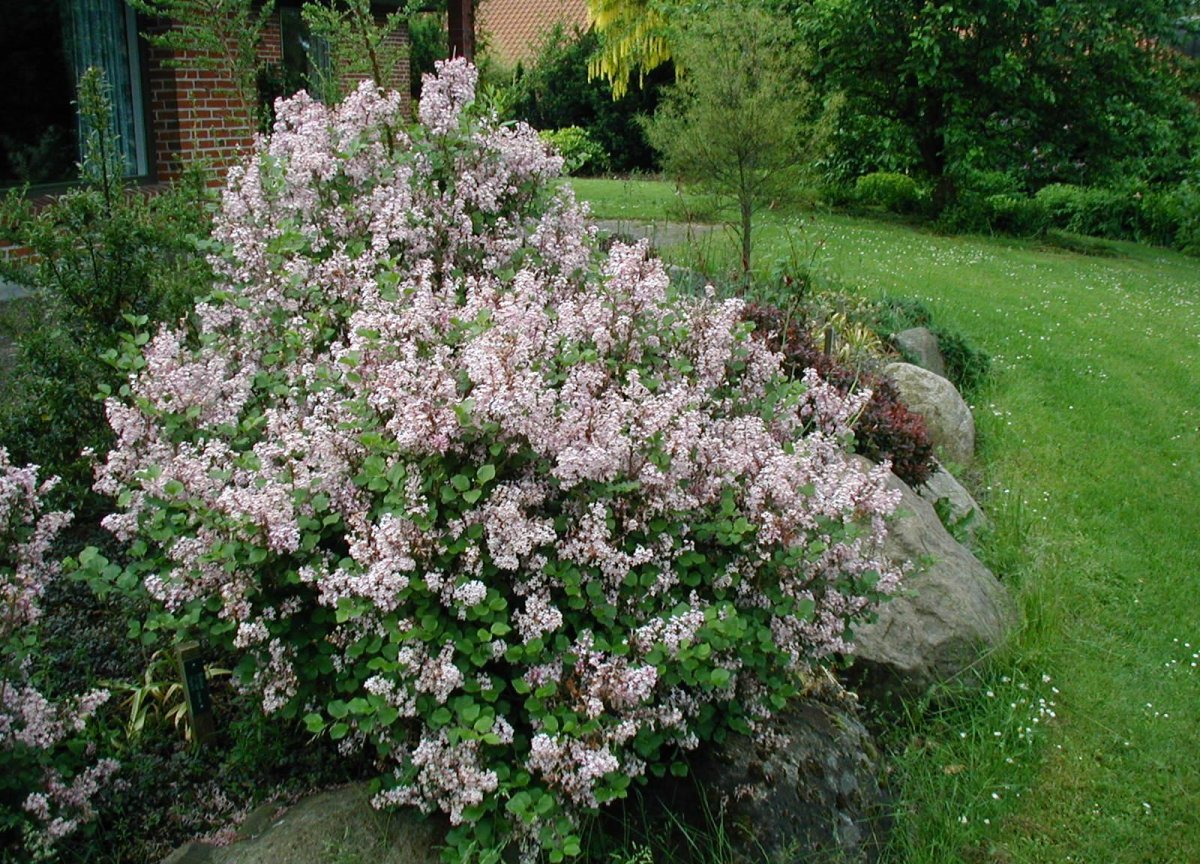 Lilac small-leaved in the garden.

All kinds of different beautiful blooms and pleasant aroma, often in gardens and on plots you can see the lilac: luxury, hardy shrub, great growing in the South, and in the North. In addition, common lilac, a well-deserved reputation among gardeners uses:

Lilac is a beautiful legend: the God of meadows and forests, pan met and fell in love with the beautiful nymph Syringa, the. The nymph was scared, ran and turned into a shrub with fragrant flowers. The name of the nymph and became the Latin name of the genus.

Varieties differ in flowering periods, the shape and height of the bushes. The flowers can be gustomahrovye, up to four inches in diameter. Inflorescences of different size and density, classic purple shades as a result of working breeders are complemented by purely pink, purple, blue, yellow. Wild species are quite modest, but it can be used for group and single plantings, the formation of hedges. Garden varieties offer along the tracks, on the lawn, for registration of partners, alleys and flower beds. 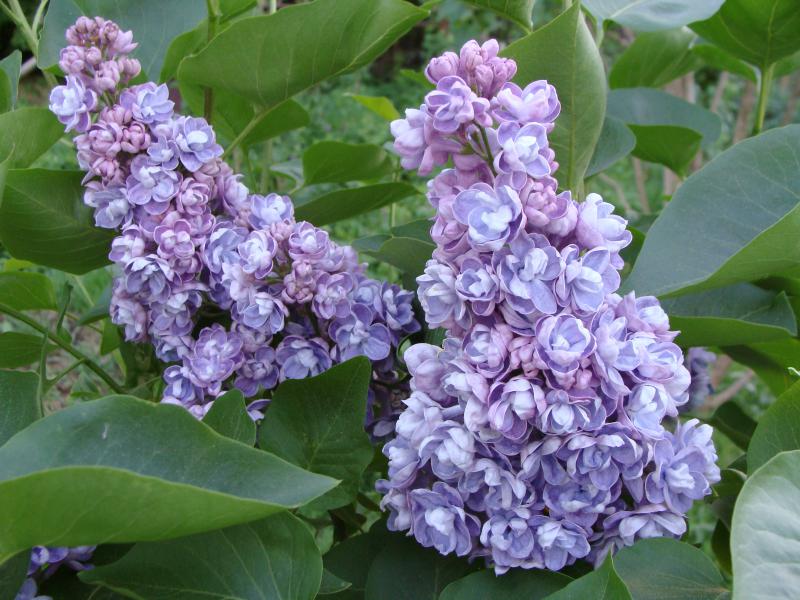 The most interesting varieties of domestic and foreign selection

"Vesuvius" – with violet-purple flowers, large, on the lower side colour lighter. The foliage is also large, the Bush blooms moderately, in the medium term, height – average.

Violetta – dark purple buds, flower diameter up to three inches. Form is double and semi-double, flavor of the weak. The leaves are dark green, young – brown patina. The bushes high, pryaralye, shoots – light grey. Used for distillation and for landscaping the site. 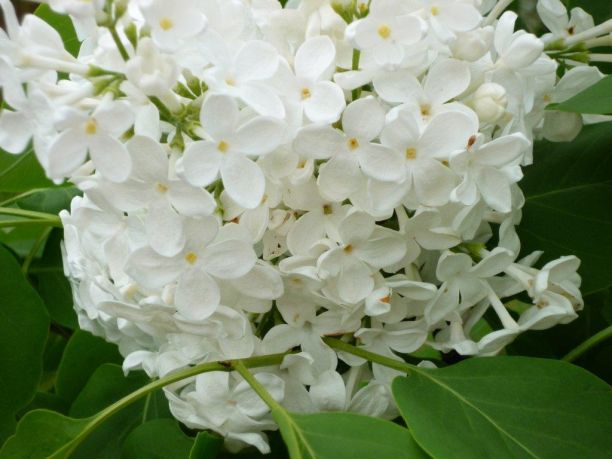 Lilac, the sort of "Galina Ulanova".

"Joan of Arc" – inflorescence a dense narrow form, the flowers are white, Terry, fragrant, leaves – bright green. Blooms profusely, in the medium term, Bush height is up to two meters.

"The Defenders Of Brest" greenish-cream buds, flowers – from pure white to milk, Terry, large, it blooms for a long, in the medium term.

"Cavour" – one of the darkest purple varieties among. The flowers are large, simple form, with a pleasant aroma.

"Pretty Nancy" – pale pink flowers with a silver sheen. One of the best varieties among Terry forms such a coloring. 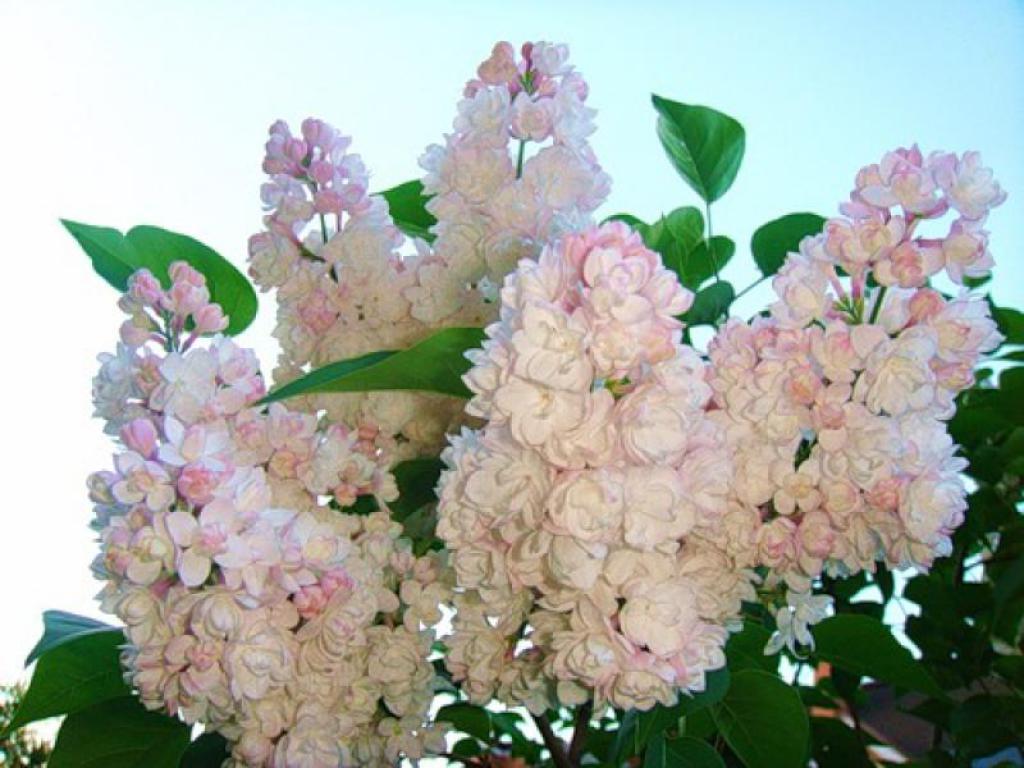 Lilac, the sort of “Beauty of Moscow”.

"Montaigne" flowers change color from pale pink to lilac-white. The bushes are long straight shoots, seeds are not fastened. Used in garden planting for cut flowers and landscaping.

"The Lights Of Donbass" Magenta-purple flowers with light purple tips. Variety is fragrant, resistant to fading. 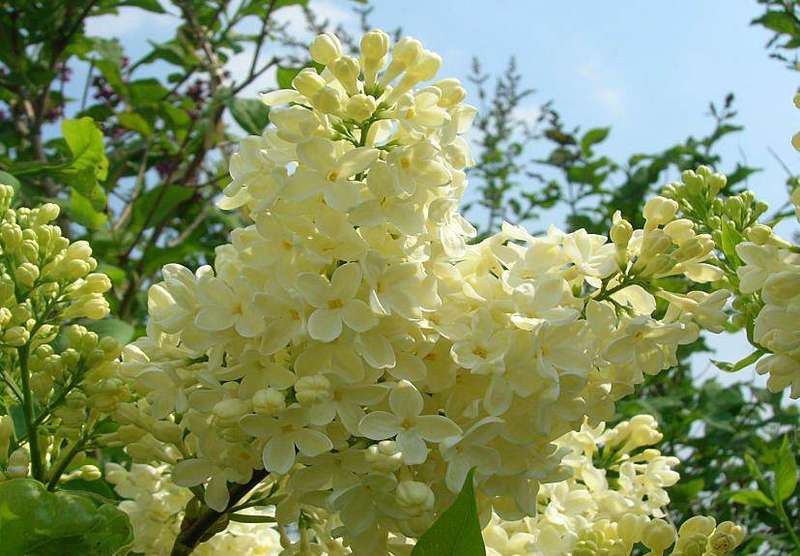 Lilac, the sort of "Primrose".

"Flora – 53" with a simple, large, white flowers. The bushes high, flowering – early. One of the best varieties with these characteristics.

Shrub of medium height, highly branched. Obtained from the crossing of lilac Malandrino and Afghan. Adult branches becoming gray or brown tint. Inflorescence ovate, white or white-purple, fragrant. Flowering from may to June. In the culture of mid-seventeenth century, species is frost resistant and drought resistant. Used in a group, complex and single crop, to create hedges.

A hybrid of the common lilac and the Persian, received in France, but popular in China. A very tall shrub to five metres in height, thin branches, spreading, hanging. The flowers are large, at blooming turn a red-purple tone, aroma delicate and pleasant. Shrub decorative, used in group and single plantings, bred varieties with pink, white and dark pink double flowers. The most common forms – with plush purple, pale purple and dark purple flowers. 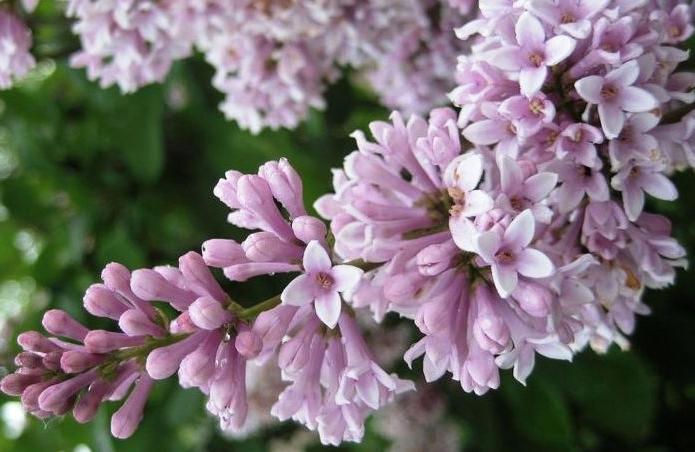 Tall shrub reaching four metres in height. Branches are olive-brown or gray, lenticels light, stand out. Foliage dark green, ciliate on the edges. Petioles with purple colour. The flowers are medium-sized, up to one centimeter in diameter, color – creamy yellow tinged with pink or pale purple. The smell is not very pleasant. Blooms in June. In the wild it grows in the North-Western part of the mountains, in the subalpine zone, in the river valleys. The plant is frost-resistant, can tolerate high soil salinity.

Densely leafy shrub high, distributed in China. Young branches are yellow-gray in color, then turn brown. The flowers are fragrant, pink-purple. Blooms in June or July, fruiting in July and August. Like all the hairy lilac, view hardy. In the culture since the mid-nineteenth century, used for landscaping and planting in hedges.

Is the name of the breeder from Canada, which became this kind of by crossing lilac hairy and drooping. The bushes reach four-metre-high, similar to the hairy lilac, but the bloom pointing down. Branches bare and thick, leaves glaucous below, rarely pubescent. Promising and original look with late flowering period. Winter hardiness – medium.

Discovered by the expedition G. Potanin in the end of the nineteenth century in China. Is the name of the Governor of Riga. Tall deciduous shrub with dense foliage. Wrinkled leaves, pubescent below. Flowers pinkish-white, blossoms – delicate, abundantly flowering and fruiting. Well propagated as cuttings, and seeds. Rare, the flowering periods – late. 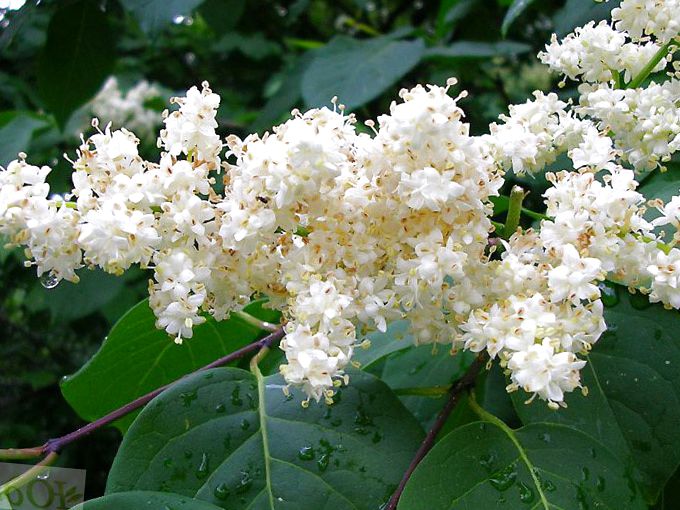 In the wild it grows in deciduous and mixed forests of northeast China and the far East. The tree is multi-stemmed, with a spreading crown, in natural conditions up to twenty-meter height. Culture – two times lower. Young shoots reddish-brown, similar to cherry, old trunks is dark gray or dark brown. The leaves change color from greenish-purple in spring to yellow-orange in autumn. The flowers are small, white or cream, smell of honey. Inflorescence – large, paniculate. Flowering is abundant, later. The species tolerates urban conditions, dust, pollution, frost.

The view deserves wider use in landscaping of cities and towns, horticultural areas. Recommended for live fences, single plantings, green songs, for the design of reservoirs. In the culture since the mid-nineteenth century.

It grows in the wild in the Balkans and the Carpathians. Tall shrub up to seven metres in height, the shoots facing upwards, densely branched. Leaves – bare, dark green, flowers – purple, small, aroma – weak. Blooms profusely, later. Successfully developed even in the Northern regions, drought- and frost. Undemanding to soil composition, tolerates urban conditions, tolerate formative pruning. It is widely used in group and single plantings, to create green fences. In the culture of the first third of the nineteenth century. The colour of the flowers there are two forms: with pale violet flowers with reddish-purple. 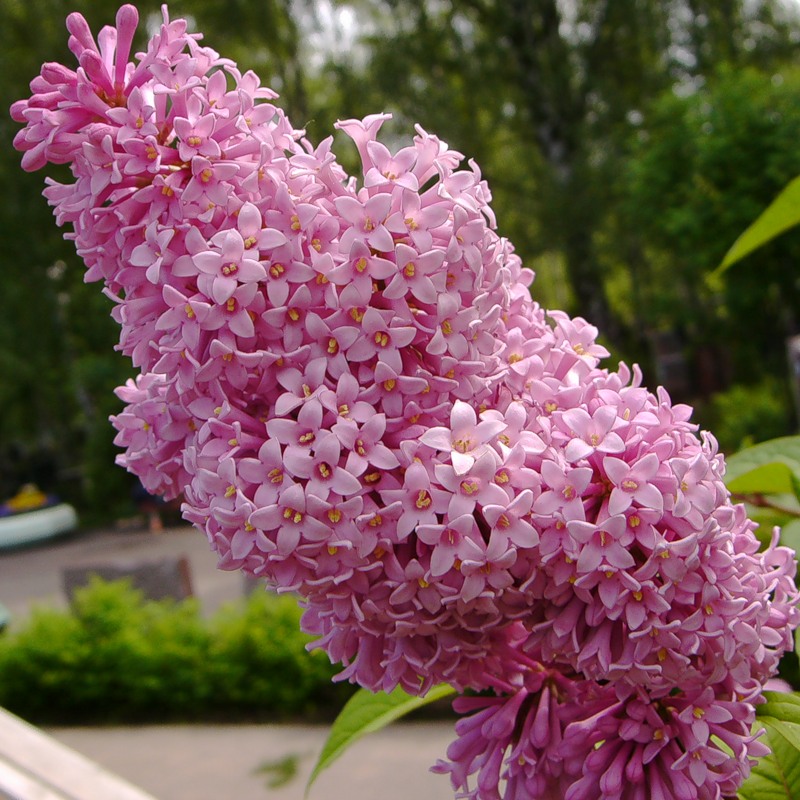 Originally from Northern China, it grows in forests and forest edges. Shrubs up to three metres in height, erect, bark – dark gray, the foliage is dark green above and gray green underneath. Flowers reddish-pink, with white middle, blooms late and abundantly. By crossing lilac drooping with the Hungarian was the resulting hybrid of Asiflex, similar to drooping lilac, but more winter-hardy. The species prefers lime-containing soil, Sunny areas and moderate watering. Excess moisture can not stand, weak shoots should be cut, after flowering, damaged and withered stalks removed. When carrying out rejuvenating pruning all poorly developed branches are removed to ground level, others are pruned to 30 cm, conduct a top dressing of compost or rotted manure.

Young plants are planted in September or in April. Winter hardiness is high, in severe winters may be covered with ice shoots. Kind of well propagated by cuttings, seeds, it is used for planting groups, for forming hedges. 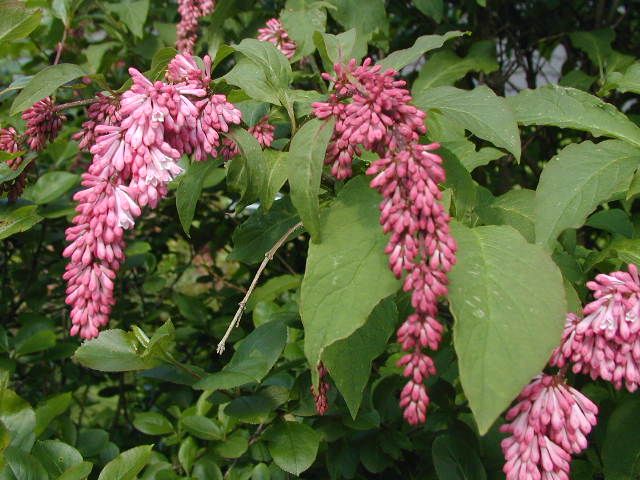 After planting the young plants the soil around well-watered, then mulch with peat, decomposed leaves or humus. During the vegetation period the soil is loosened to a depth of 4 to 7 cm three to four times. In the first two or three years, fertilizer, in addition to the nitrogen, do not make. Nitrogen fed from the second year of life. Efficient organic fertilizer in the form of a slurry, it make, stepping back from the trunk two feet. In the fall make potash and phosphate fertilizers. The best feeding – ash, Norma – 200 g in a small bucket of water. In summer, the shrubs are watered in very hot weather, during flowering and growth – often, loosen the soil several times per season, weeds are removed.

Beautiful shape and abundant flowering is supported by proper and systematic pruning bushes. In the first two years the plant this agrotechnical reception needs, on the third or fourth year begin to form strong boughs. Before awakening kidney, in early spring, in the crown isolated from five to ten conveniently located branches, the rest is removed. Sanitary pruning and thinning carried out as necessary. The bouquets are cut to two thirds of flowering shoots, this causes an overdevelopment of the remaining and the formation of new shoots. Cut flowers for bouquets, carry out early in the morning, the ends of the branches split.

Young seedlings need shelter for the winter with dry leaves, and peat, the thickness of the layer through 10 cm.

Beautifully flowering Bush has long been widely used in parks and gardens. Culture is highly valued for the abundant and continuous flowering, beautiful image. In landscape landscapes most often use the common lilac and its varieties.

Photo: species and varieties of lilacs 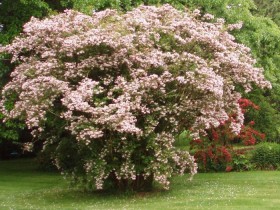 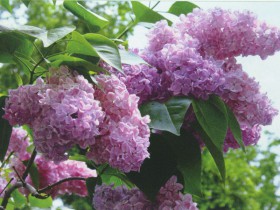 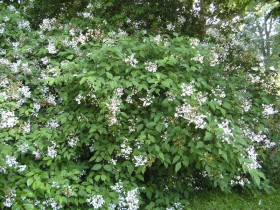 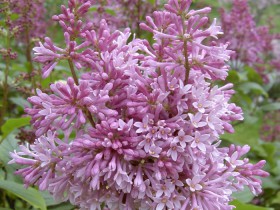 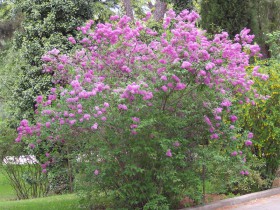 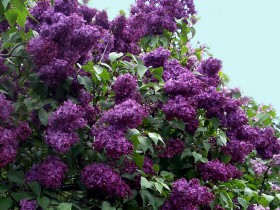 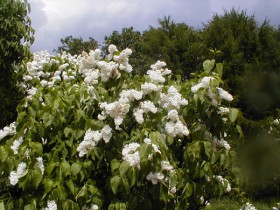 Lilac, the sort of “Vestal”. 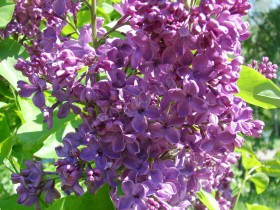 Lilac, the sort of "Vesuvius". 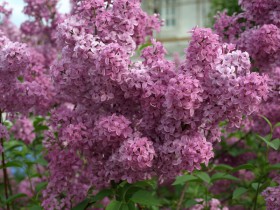 In the photo: lilac Persian.