Bonsai is an ancient Japanese art of growing dwarf trees. 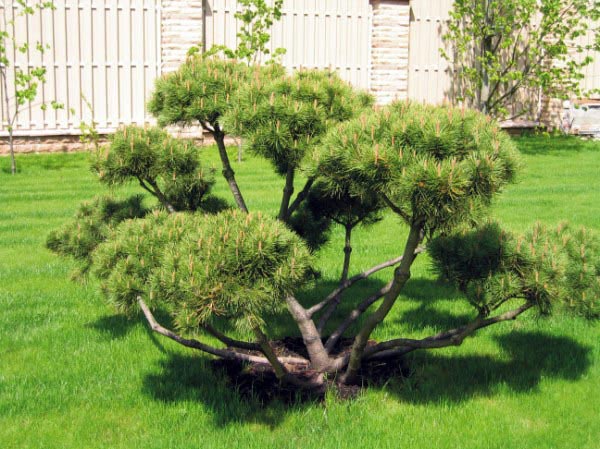 The art of growing bonsai – bonsai

The essence of bonsai is to create a small copy of any tall tree by controlling its growth. In order, to grow a bonsai with their hands, you need to know all the technology and spend no less than 5 years time.

Bonsai tree to complement garden decor, combined in the rest of the vegetation and outdoor sculptures.

We recommend you to view the video about, how to grow bonsai with their hands:

What trees are suitable for creating bonsai?

A significant advantage of the bonsai in, that his creation can come, as tropical trees, and representatives of the region, where you are. Bonsai trees in the garden

Among the most popular trees for bonsai allocate:

Seeds for trees can be purchased at any gardening store, where it will tell you the features of cultivation and care of selected plants.

The cultivation of bonsai

In order, to grow bonsai in the garden, you must germinate seeds and process protection from diseases (we will talk about them later).

A few days before planting the seeds should be placed in the water, what would they swell and start the growth process.

To accelerate the growth process of seeds, allowed to break the hard shell.

Premature treatment of seeds with fungicides is. It is also recommended to sterilize the soil for planting.

Time planting seeds in the soil, this spring, autumn and late summer. It is best to place the germinated seeds in peat cups with a mixture of peat with sand (the ratio 1 to 1). The mixture in the Cup should not reach the edges at a distance of about 3 cm. On top of the mixture is poured a layer of soil (no more 1 cm), which is carefully pressed down with a lump of wood. The ground seeds are placed and covered with a thin layer of sand, which is pressed slightly and moistened. After all this, the Cup wrapped in cling film and placed in a cool (to 15 degrees), protected from the sun place for further growth. In the finished greenhouse is necessary to monitor the soil moisture and wait until the first shoots emerge.

When the first sprouts appear out, need to punch in polyethylene openings for entry of fresh air. The appearance of sheets, the greenhouse can be fully open.

Now, when the tree begins to grow, you must begin to create its dwarf size. To do this, the taproot is trimmed by two-thirds of its length. Correct pruning of roots and branches

Recommended every year to cut ¼ of the entire root system, not just to trim the roots in a circle.

When the height of trees exceeds 10 cm, it can be transplanted from the Cup into the pot and sometimes to expose to sunlight.

Create the shape of the bonsai

The main difficulty of creating bonsai is to give him the traditional forms. This Japanese bonsai branches are inclined to the bottom, and the crown has a beautiful view.

In order, that would make the shape of a beautiful bonsai, need to trim and pinched trees. The basic forms of bonsai

Pruning should be carried out once a year (at the end of the winter period), this removes large branches and main shoots of the plant. With the pinching of the bonsai, you can stimulate the growth of new, more thin branches and leaves. As a rule, pinch out the bonsai a few times a year.

To direct the branch dwarf plants to the ground, it is recommended to hang weights to them or to give a desired shape with wire (as shown in the pictures). After half a year, the wire from the tree can be removed, the shape of the branches will remain in position.

That's the whole technology of creating bonsai in the garden with his own hands. Please note that, what is the maximum height of bonsai should not be more than, than 1,5 meter!

It is recommended to find the advice of experienced gardeners on creating bonsai and treatment of the most common diseases of dwarf trees, which are given below.

What would the process of creating bonsai was easier and you did not commit gross errors, we offer to your attention useful advice from professionals:

The main diseases of bonsai and their treatment

Bonsai, like any other plant, exposed to various diseases and damage by pests.

Among the most popular diseases of dwarf plants produce:

A brief look at the essence and methods of treatment of diseases of bonsai.

Root rot is a dieback of the root system of the bonsai in consequence of the bad ventilation of the plants and excessive irrigation. The result of the defeat of the dwarf tree root rot, the trunk of the tree and the soil near the root is covered with a green patina, the leaves may change their color. In order, that would cure bonsai, need to move it in a well ventilated place and to reduce the amount of watering. White root rot, as well as classic disease, affects the root system of plants, but not because of high humidity and poor ventilation of bonsai, but because of the emergence of the fungus. The bonsai, affected the white root rot, fall leaves and change color shoots.

In order, that would cure the damaged plant, it is necessary to remove the diseased roots, and the rest be treated with special medication. After this, the bonsai need to transplant to a new container and replace the soil.

With the disease of bonsai rust, the plant adopts a characteristic color throughout the stem and leaves. The rust means the plant diseases fungus, which can quickly destroy a tree. That would cure bonsai, you need to remove all the buildup of rust, a remaining healthy surface be treated with a fungicide (on the packaging the instructions for use of this drug). Powdery mildew often affects garden plants, including bonsai. This disease is a fungus, which brings harm to the leaves of the trees. The main symptom of powdery mildew is a white coating on leaves on two sides. To treat bonsai with their hands, you must remove all affected parts and treat the plant with fungicide special. After this, the bonsai need to quarantine, whatever the infection is not passed to other plants. The defeat of bonsai logomachist dew is the formation of yellow plaque and white fluff on the sheet. That would cure bonsai, you need to do the same, as with the treatment of trees from powdery mildew.

As a consequence of improper removal of the root system and branches, bonsai can get verticillatum, which brings harm to "vessels" dwarf plants. As a result of defeat by verticillatum, the leaves of the trees begin to turn yellow, but the plant itself dries quickly.

To treat bonsai need, as always, remove affected parts and treating the tree with a fungicide.

The result of the lack of sunlight, bonsai can get sick with chlorosis. The disease is not too dangerous, you only need time to rearrange the tree in a Sunny place. The symptoms of chlorosis of bonsai: the tree loses its color.

Defeat the plant by aphids

Aphids are minor pests, feed on plant SAP. Usually aphids underneath the leaves and affects tree. To get rid of aphids, enough to moisten a cotton swab with a solution of soap and to remove pests from plants. After that, the damaged leaves are cut, a tree is treated with special insecticide against aphids. Defeat the plant by aphids

Curly aphid causes the same dangerous damage to the plant, as plant aphids. The only difference is in the fact, that in the formation of curly aphids, the leaves quickly wilt, and the plant formed area with white down, where are the pests. A method of treatment of bonsai, similar to the above. The only thing that I would like to mention, in severe cases of bonsai, on the tips of the leaves it is necessary to additionally carry out the surface treatment with a special poison.

Damage to the bonsai caterpillars

The caterpillars eat the leaves and shoots of all plants, bonsai is no exception. Download the caterpillar is quite simple, to remove even simpler. The main time to locate the problem and solve it. Damage to the bonsai caterpillars

After, as the caterpillars and their webs will be removed, bonsai should be moved to another place and it is desirable to process gypsum.

Damage to the bonsai ticks is slow, but at the same time, this process is quite dangerous. That would detect the mites on the plant, you need to pay attention to the presence of web on the leaves. If on the web mites will not be visible (t. to. they are very small), beige spots will become obvious indicator data pests. Removing ticks is quick. These insects are afraid of water, so bonsai to moisten, themselves pests to remove with tweezers. After this tree we recommend that you move to a place with poor lighting, and the leaves are treated with a cotton swab with alcohol.

Damage to the bonsai ants

Ants are carriers of various diseases of plants and smaller pests (for example, aphids). Detect the occurrence of ants near the bonsai is quite simple. To resolve the problem, it is recommended to transplant the bonsai away from the nest, or, treat the plant with a special poison.

The defeat of bonsai nematodes

Nematodes are little worms, which affects the leaves, the stems and roots of plants. As nematodes carry a variety of diseases, which quickly hit the bonsai. The defeat of bonsai nematodes

Symptoms bonsai nematodes: decay of the root of a plant, color change, stop the growth of kidney, drying.

To cure a diseased bonsai need to move the plant to a cooler place, to reduce watering and completely remove all contaminated soil. The plants are processed by nematocidal, and the capacity for change of bonsai efficiently disinfected.

Lose the scale and lornoxicam

Scale insects and lornoxicam called oval brown insects, white and brown color. Data to detect insects on the bonsai is quite simple. To remove the scale, you need a needle to remove education from the plants, wipe this area with alcohol and a special tool — insecticide. Lose the scale and lornoxicam

Symptoms of the bonsai beetle and lornoxicam: the leaves wither, change its color to yellowish-brown, shoots stop growing, the formation of characteristic oval formations on the plant.

The defeat of the bonsai beetle-grinder

The bug-grinder can cause very significant damage to the plant, including bonsai. To determine the damage the beetle can be a corresponding hole in the bonsai (as shown in the picture).

The defeat of the bonsai beetle-grinder

Most often the bug-grinder harms coniferous wood in the summer season. To combat this insect it is necessary to use special spraying drugs. If the beetle lays its larvae under the bark of the plant, they must be timely to remove. After treatment of bonsai, the tree should be fed in the spring (that it has regained its strength) and be sure to handle the special poisons!

That's all, I would like to tell you about, how to grow and cure bonsai with their hands.

I hope, the technology for growing dwarf tree was accessible and useful!

We also recommend you to see the idea of creating the green sculpture in the garden their hands!


You are here: > Plants > Trees > Bonsai in the garden with his own hands
See more materials, related articles: