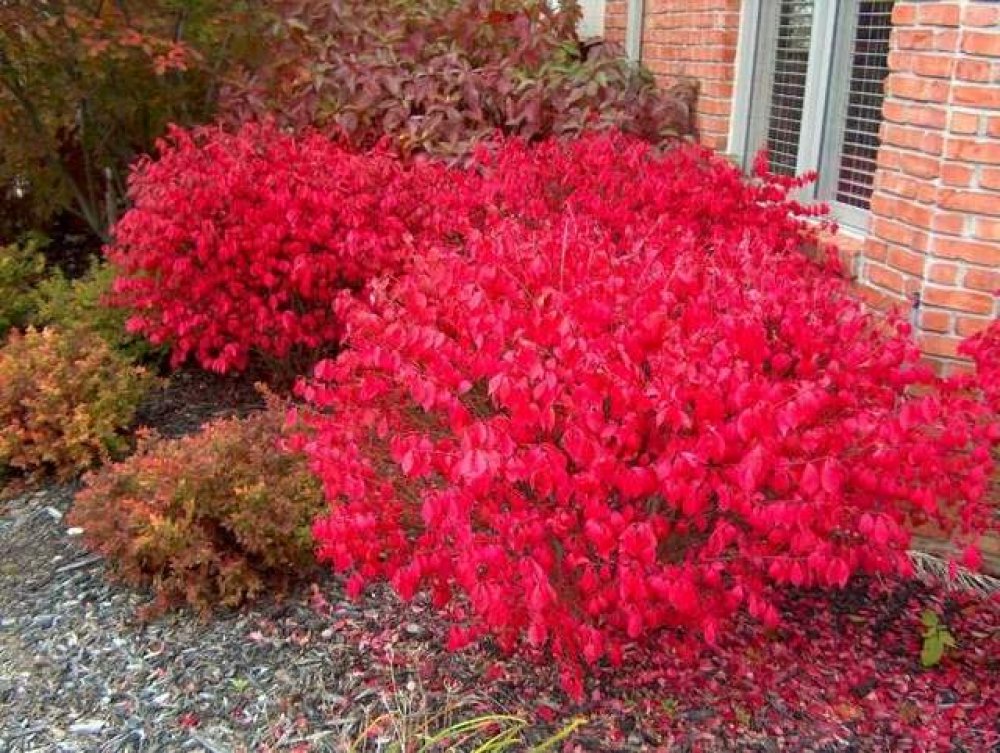 Beautiful shrub Euonymus is not too widely used in ornamental horticulture. It is as good in single, and in group plantings, when creating "hedges". Krone lace, small leaves on branching shoots create a natural, intricate ornament. The plant changes colour during the vegetation period: summer shrub dark green, in the fall, he suddenly, during the week, gets all the shades of red and orange. Ripening fruits look like little lanterns, they also adorn the garden.

The Latin name of the shrub is translated as "glorious plant with a good name". In the wild plants of this genus live in the understory of mixed and deciduous forests, they are typical of temperate and subtropical climate of both hemispheres, sometimes found in the tropics, avoid only the most Northern areas.

Rod bereskleta combines evergreen and deciduous shrubs and low trees with rounded or quadrangular shoots, with cork growths, smooth leaves, located opposite. Flowers – inconspicuous, brownish or greenish, pale colored, bloom after the appearance of the foliage. The fruit of Euonymus is leathery, dry box, the seeds inside are white, red or brown color. In the summer it is almost invisible, blends with the foliage, but by September, becoming decorative, bright color. The color of the fruit depends on the variety of plants, most often it is shades of yellow, al, Burgundy, dark purple, but there are belplata form. On the background of bright green boxes look, like real garlands. When the main color of the Bush turns red, boxes crack, of them out the seeds with "parachutes". Fruit of the poisonous, but not so, to be seriously poisoned one or two berries. 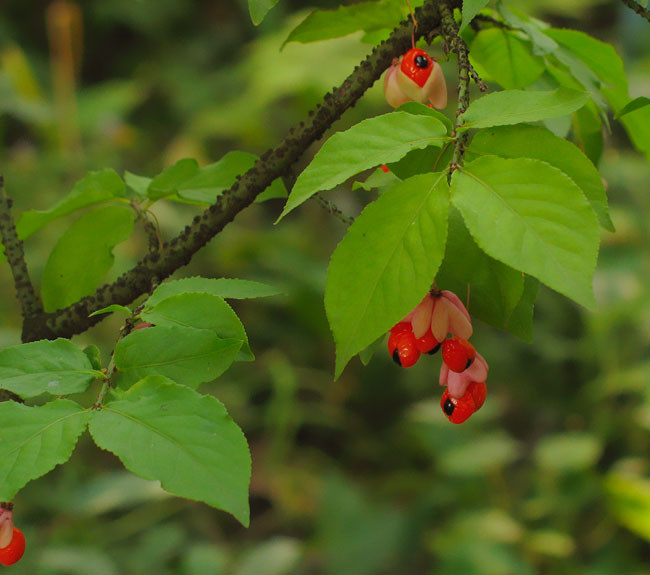 Characteristics of different varieties of Euonymus

In open space it is best to plant Euonymus maackii. In the penumbra well will feel sorta "Warty" and "European". In the shadows on the boundary of the site to have original fence from Sakhalin Euonymus or sacred, varieties grow well. For planting on the slope of the best fit is still the same Sakhalin grade or bolshegrudye, the lower branches will take root and create additional points of support. A very important quality – plants of this family are well tolerate urban conditions, they smoke- and by gas resistant.

Bereskleta demanding to the composition of the soil, can't stand stagnation. For good growth and development requires a slightly alkaline or neutral compounds, acidic soil can be "corrected" by application of lime. For best fruiting under bushes make mineral and organic fertilizers, the clay compositions of soils – sand.

The best plants are for premises with a winter temperature for varieties with green foliage from two to eight degrees, for variegated – from six to sixteen degrees. It can be cool in winter garden, warmed loggia. In the summer of the desired temperature in reasonable limits, to 20 degrees. Too hot and dry conditions dangerous, such a climate contributes to the spread of mites.

An irrigation schedule depends on the temperature, in winter it can be moderate and very reasonable. At the same time, the earth com should not dry out. Every year, in early spring, is transplanting young plants, these agricultural works can be enjoyed since the beginning of February. Old shrubs are transplanted less often. Do not combine pruning and transplanting with anti-aging goal. Land the mixture should be medium density, ideal: garden or turf ground, sand, compost, peat, leaf mold.

Most types well and successfully propagated vegetatively: root suckers, dividing the Bush, green cuttings. For the latter method in the middle of summer choose elastic young shoots, cut cuttings four to six inches, which is located one internode. Selected planting material planted under film in the greenhouse, on top of fertile land poured sand layer of five to seven centimeters. A month and a half of the stalks should acquire roots.

Seed propagation is more difficult, when sowing without seed and freezing in the wild, they will germinate only in the second year. Immediately after collection, the material stratification. The procedure takes place in two stages. The seeds are mixed with the calcined coarse sand or moistened and decomposed sphagnum peat, the ratio is one to two. The mixture was kept at a temperature of from 10 to 12 degrees for three to four months. When most of the seeds will burst the shell, the temperature was lowered to zero and store the planting material in such conditions four or five months. To avoid potential rot before planting the seeds cleaned from prisiminimai, and treated with a solution of potassium permanganate.

Seeded plant material in the beds with shallow, in two centimeters, grooves, soil is the substrate of turf and ground sheet, sand and humus, ratio – 1:4:1:2. Seedlings should appear in two to three weeks. Fall and spring soil mulching with peat litter layer in three centimeters. Summer young plants are watered, make feeding mullein and sheltering spruce branches in the winter. Only in the third year young bereskleta transplanted to a permanent place of growth. 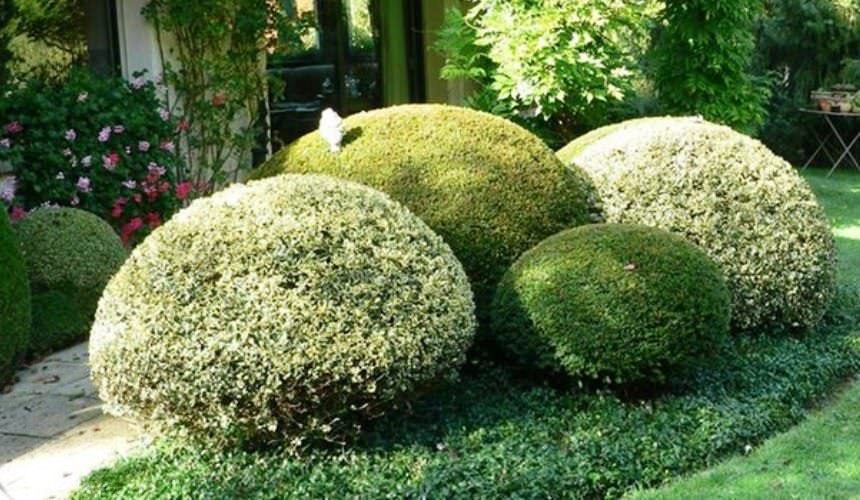 The plant is native to the temperate latitudes of Eurasia. The shrub grows up to three meters and a half or it can be a tree up to six metres. Young shoots are green, covered with warts of black and brown. The flowers are on long peduncles. Flowering time – may-June. Mature box pink and red, seeds gray or black, procement – bright red or pinkish-orange.

As the name implies, homeland of the plant is the European part of the continent. A tree or Bush reaches a height of seven meters. On the branches – cork growths, they give them an original tetrahedral form. Blooms in may and June, the fruits ripen in September and October. Boxes have a pink color, the variety is drought-resistant. 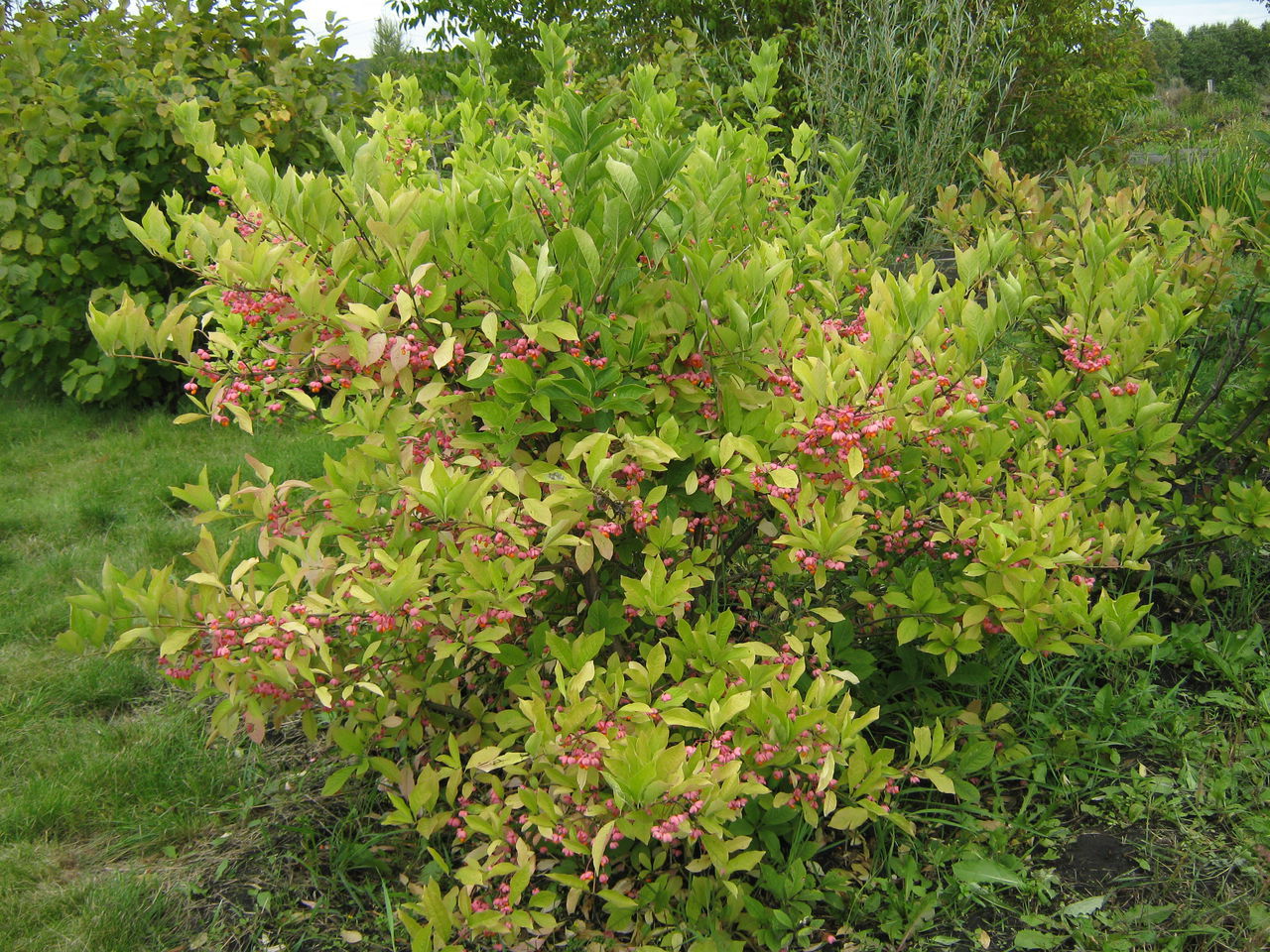 Another name Euonymus sacred. Originated In The Far East, in the wild of this region reaches two meters, in the middle strip usually does not exceed one meter. Young growth is green in color, the fruit is dark red, the same color is foliage in the autumn. The shrub is shade-tolerant. 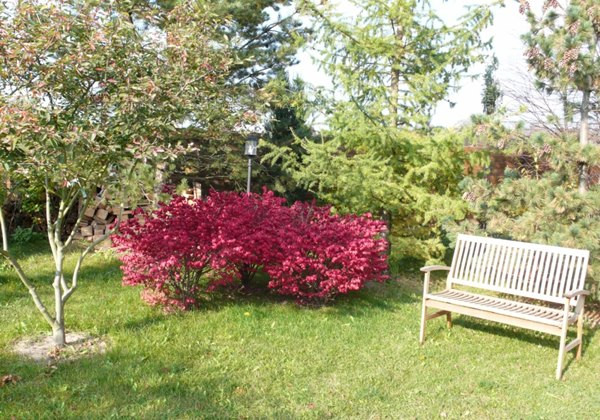 The winged Euonymus in the garden.

Homeland are the mountains of Central Asia, in these parts the shrubbery growing under the forest canopy. Height – meter, foliage yellowish-green, leathery, with short petioles, flowers – dark purple, small. Edge – green, gathered into small florets along the edges of the branches. Varieties of winter hardy and shade tolerant, prefer moderate humidity. Reproduction occurs by seeds.

Creeping shrub native to China, height – to 60 cm, branches up to three meters. If you have some support, the branch actively want to cling. The leaves are pointed, small, leathery. The plant is drought-resistant and by gas resistant, likes fertilized, loose soil. This is the most hardy variety of evergreen bereskleta. Withstands sun, but prefers partial shade. The breeders brought many decorative forms of plants, some varieties have yellow edging foliage, which with age, acquires a green color, and in the winter becomes red-brown. This kind of Euonymus can be grown at home, but in the winter it is necessary to provide a cool microclimate. In the middle lane bushes are grown in containers outdoors, and in the winter harvested in the cold, unheated space or provide a good shelter plantings.

Another name for plants "pseudolus". Homeland – the land of the Rising sun. In the middle lane grows up to a height of half a meter, in the South lianovidny acquires the form, length up to seven metres. The leaves are leathery, color – dark green. Flowers – yellowish-green, blossoms appear in June. Tolerates partial shade and air pollution. Can be grown in the house, in the bright, unheated room. Warm drops leaves.

Diseases and pests of culture

Unfortunately, Euonymus love pests. Possible, this is the main reason, influenced pretty weak dissemination of culture. Forest warty and European Euonymus breeds Apple moth, the aporia Crataegi, aphids, not only moth and cocoadev. If you plant bushes close to fruit crops, it "will delay" on all pests, and Apple and pear trees will remain clean. This feature is often used by gardeners to protect the area. The Euonymus does not allow to die, it is treated with chemicals, this method allows you to obtain maximum yields of cultivated plants, growing sesedstvo.

To combat scale insects plant spray solution aktellika, spider mites washed off with soapy water. If the shrubs were red flat mite is necessary to remove damaged leaves, Euonymus sprayed with any insecticide.

Euonymus is a good choice for the gardener, the plants are undemanding, decorative, shade. In summer, they appear to be relatively modest, but in autumn become very beautiful and attractive.

Photos of different types of Euonymus 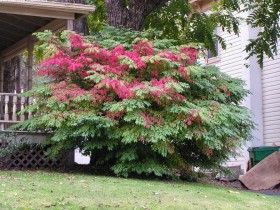 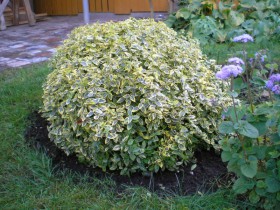 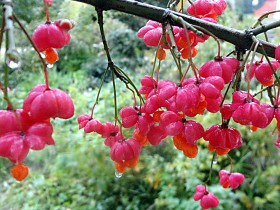 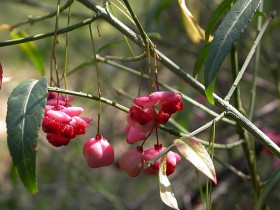 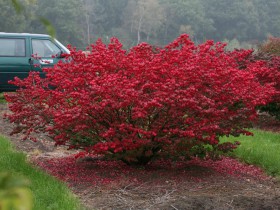 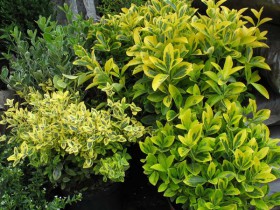 The Euonymus in the garden, video

https://youtu.be/-JPXWb1OOjs
Liked the article? Easily share your bookmark with your friends, social. networks: