Greenery in the garden is not only natural scenery and a wonderful tool for building landscape design, but clean air, carrying the health of its inhabitants and visitors. 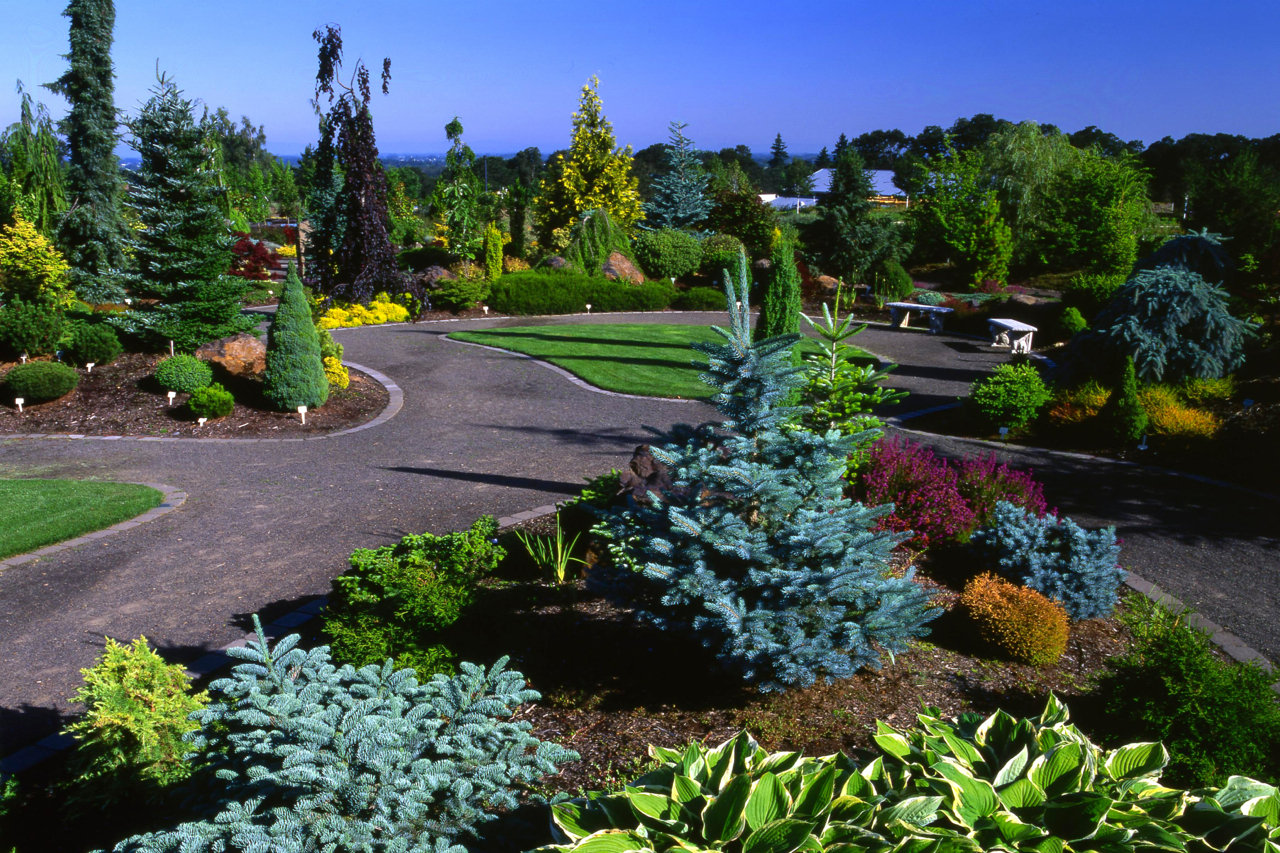 Spruce on a bed.

In any climatic zone of the countries of Eastern Europe root conifers – forest dwellers, among them – the tree with the thick and lush foliage. The smell of the resin useful for plants, it repels many pests landings.

The breeders have selected many varieties of spruce, which can give your site a unique look and originality. Beautiful thick crown can be adjusted, low and high trees are successfully used to create 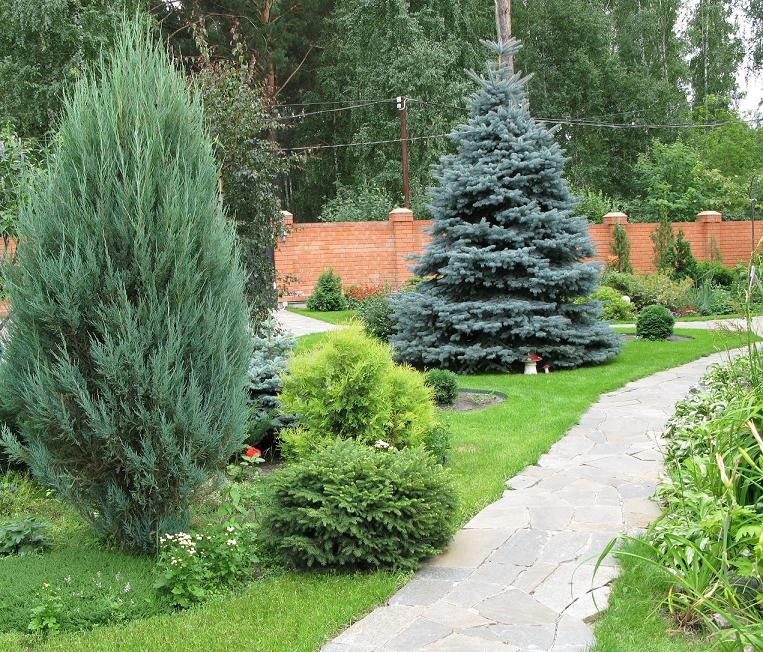 The spruce in the garden.

Very popular rockery with spruce as the main element: the combination of a low ephedra with a neat crown, decoration made of natural stones looks very natural. Such planting is good because, that do not require large financial investments, and aesthetic effect from these, the maximum: all plants can be grown on their own, stones – find or brought from the banks of the river. 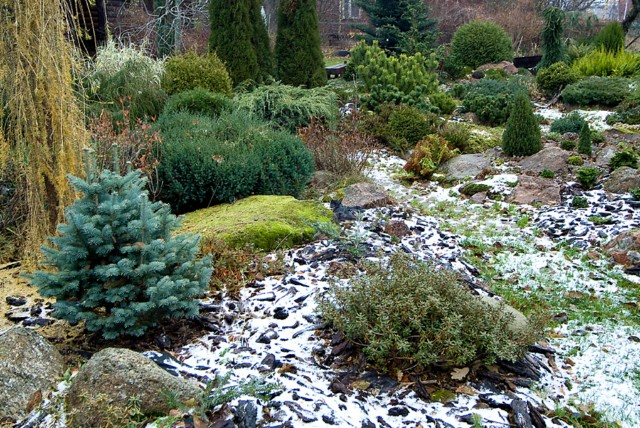 Stunted spruce in the garden.

A spruce hedge is a reliable protective element, it can be planted along the perimeter of the garden or to divide the space into zones. Closefitting, tall trees successfully replace the fence, and mini Christmas tree will decorate the area and give the landscape a sense of primeval. With the help of small trees to protect the territory from the rest of the rockery area.

Small Christmas trees, growing in your yard, you can generate topiary – create a lively geometric shape, simple, but the original three-dimensional object. This will help one of the main properties of conifers – slow growth, three to five inches a year.

On the background of wooden and brick walls, fences and buildings are very nice group of fir trees of different heights, a single tree can be the center of the garden areas or the background to bench, gazebos. New year, note on the nature, around this, do not cut down Christmas trees, much more interesting and nezabyvaemy, than banal feast. Growing the tree can be decorated with lights and toys, this action will become a real magic ritual on the eve of new year's eve. 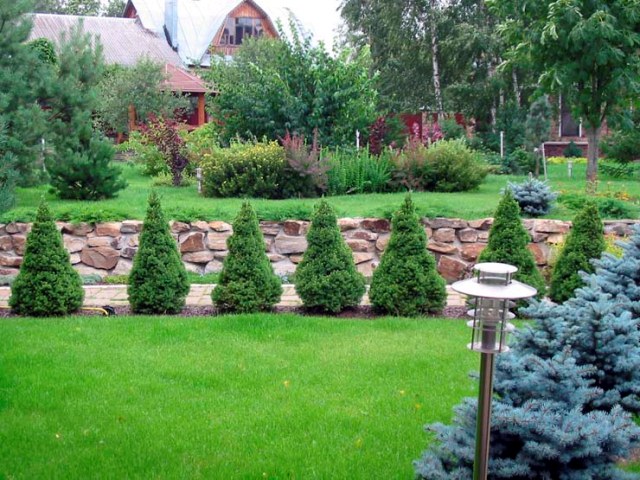 Ate on the background of masonry.

Where to buy tree for the site?

First of all, it is necessary to define a plant variety, and only then think about purchasing. The easiest way is to buy a ready – made seedlings in a specialized nursery. For those, who is not looking for easy ways, there are ways of growing from twigs and seeds. Some gardeners dig rough and tough instances in the forest and carry them to the site. Each method has its own nuances. 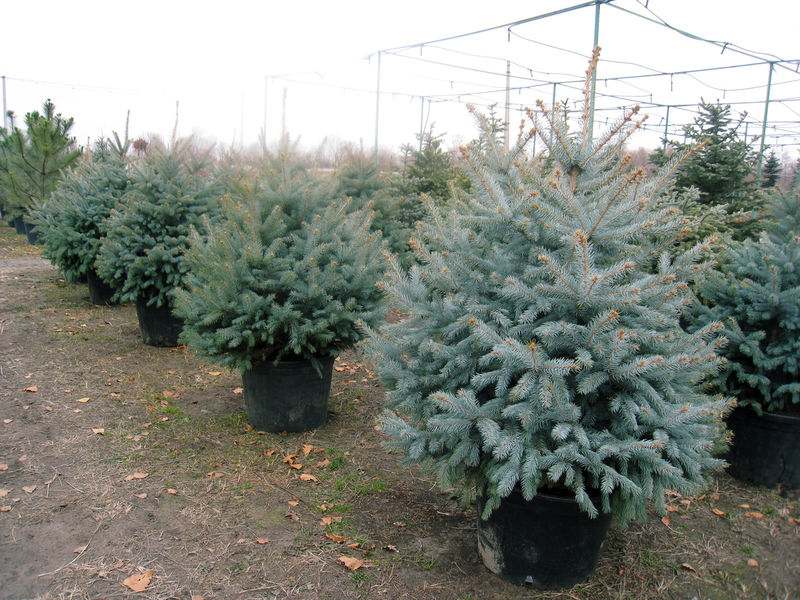 Seedlings of fir-trees in pots.

Sale in the nursery

If the planting project is already developed and only need to fill it with plants, it is easier and easier to get to nursery. This is especially true of rare and exotic firs, which do not grow in the local woods or difficult to grow themselves. Seedlings of conifers are sold in pots, its size depends on the size of the plant. When planting trees in soil soil whom you want to save, in this case, the tree is better and faster to survive. When buying ask the specialist about the main factors of growing, this applies to its hardiness, size, endurance, the watering, the required illumination. When buying, pay attention to the appearance of the plant, it should be:

Too small a pot can be an indication, that tree was transplanted in him recently, for sale, in this case, the plant root system is disturbed. 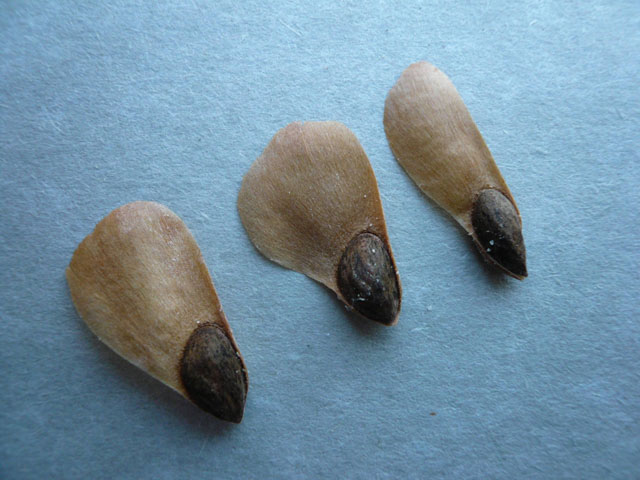 The seeds of spruce.

If you have free time you can start to grow fir trees from seed. The time of ripening of the cones depends on the region, climate, collect them in late autumn. Store plant material in a cool and dry place, protected from sunlight and wind. For two or three months before sowing the seeds from the cones are removed, to increase germination, they are subjected to stratification. The first stage is soaking in a weak solution of manganese, then the daily exposure of the seeds in clean water. Treated seeds are immersed in the tank, filled with moist sand, before planting harden them, stored in the snow or in the refrigerator.

The sowing is done in mid-April, for this kind of work better use of the greenhouse with sawdust. On top of sandy loam soil poured a layer of shredded wood with a layer and a half to two inches, placed seeds, top – sawdust again. This position creates the most natural growing conditions.

If the grower decided to plant the seeds in open ground, you will have to build additional protection, for example, the frame is made of wicker with cotton fabric, which will protect future ate from the sharp wind. In August, the frame can be removed, but to make shelter from a thick layer of dry leaves. For such kind of sprouting seeds you can use the boxes, but the outer conditions should remain the same.

It takes a certain regimen: moderately moist soil, additional watering in the heat, plants fed three times over the summer. As fertilizer well-suited mullein or hydropon, diluted with water. After two or three years seedlings are seated, the distance between them should reach half a meter. Too long and damaged roots better to remove, the remaining place at some time in the humus. Then the seedlings doraschivayutsya three or four years, loosen them, fertilize, watering once a week. In the spring and compulsory feeding, before the beginning of Bud swelling. You can use a nutritious blend of manure, potassium nitrate and superphosphate. The components are mixed well, bring in the soil near the seedlings, dug to a depth of 10 cm, pour, fertilizer needs to be absorbed. 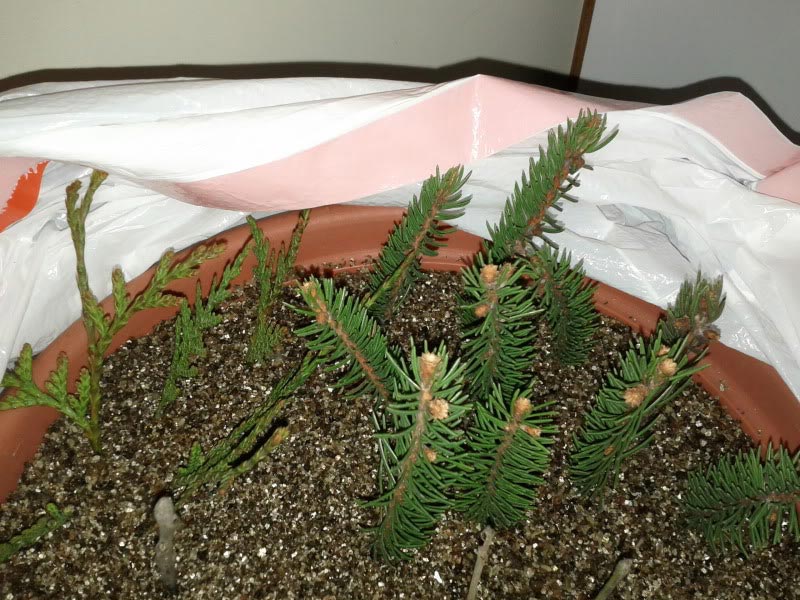 Very rare, ornamental species, propagated by sprigs. Planting material, chopped in April, can root in the same year, later, cut off the stalks next year. Often gardeners prefer the August cuttings, at this time, the shoots will not grow and begin to odrevesnevshie. There is a winter method, it has been used successfully in respect of all coniferous, including for Christmas trees.

This method of propagation consists in, with the help of pruning shears or garden scissors to cut off the side branches. It is necessary to do so, to the end of the slice is preserved, "heel" part of last year's wood. It should not be a big, otherwise, it can cause decay. Part of the needles from the lower part to gently cut, they can also prevent the development of root system. 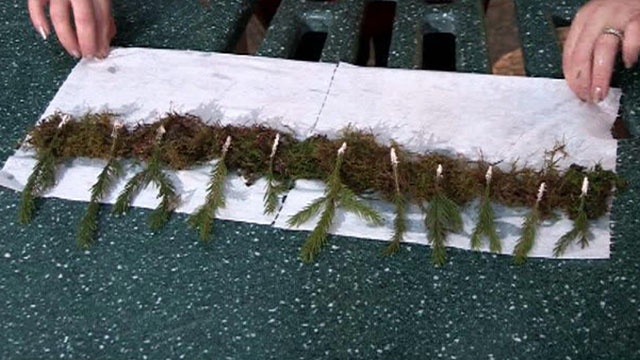 Spruce capricious and requires special treatment, this relates to additional stimulants. Cut branches are placed in a vessel with the appropriate chemical solution and kept there for 12 – 14 hours. Material for the storage of cuttings can serve as sphagnum, perfectly absorbent, it should be soaked in clean water. The film must be spread on the table, along it lay damp moss, lay the cuttings: every twig dipped in stimulating powder, and then its lower part is placed on the tape. The film is doubled so, to the root part was wrapped in foil, the tops of the sprigs should be free. Roll film in roll, it should be close, but not tight. The resulting "bouquet" will be stored until spring. So they don't untwist, the film tied with elastic band or twine.

Store plant material in a cool pantry or on the porch. Cuttings can be placed between wooden frames or hang them from the side, so they did not get direct sunlight. Provided winter cuttings, to the period of the spring planting already have small roots.

Rooted sprigs can be planted on the site in April, but not in a permanent place, but in the box or pot for growing. A good option – ventilated and well-lit greenhouse. On a constant place of growth of the cuttings planted in two years.

Hiking in the forest for the tree will be successful, if you remember simple rules:

Rules of excavation: mark around the trunk area, repeating the circle, which constitute the lower branches. The depth of the ditch, half a meter. Carefully remove the tree from the soil, so, to the roots of the preserved soil. To shift the sapling to the canvas or other thick cloth, wrap, pin the bundle on the cart or wheelbarrow. You can take a bucket or two of soil from the place of growth, the tree has taken root in a new place as quickly as possible. It is important to indicate on the side branches light, tying the ribbon, to correctly plant the tree in the garden.

And seedlings, store-bought, and trees, excavated in the woods, require compliance with the General rules when planting. The spruce survives better in late autumn and spring. Blue spruce likes spring planting. The plot is the selected: lightly shaded or sunlit. Ate, growing on marshy soils, poorly developed, you need to take care of the drainage. The best place for the growth of the solar site, which goes to partial shade, low-lying groundwater, the soil should be fertile, rich in humus. 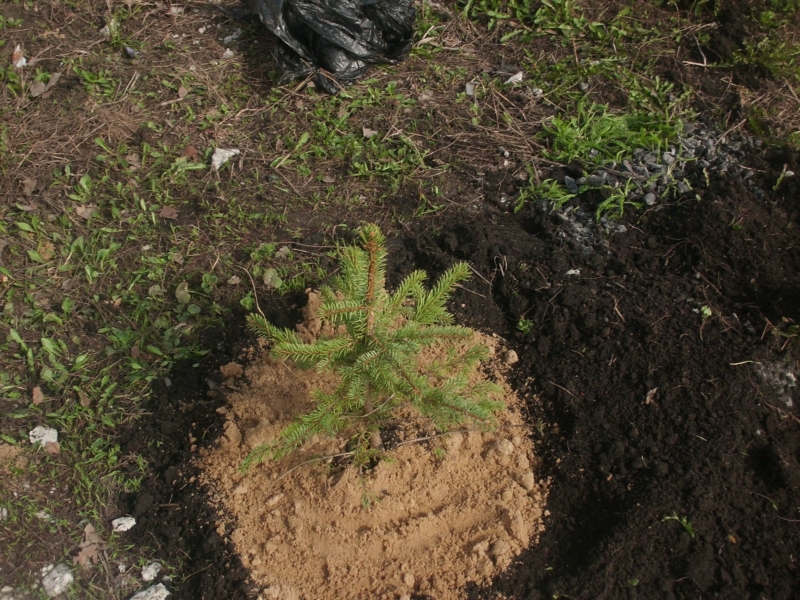 The rules of care for conifers

The soil around the spruce should always be a little moist. Check the level of moisture is very simple: need to squeeze in the hand a lump of earth. If it falls apart – the time has come for irrigation. Water the soil to gently, water should be evenly distributed around the entire root ball. Water consumption – 10 litres once a week for six-foot trees. 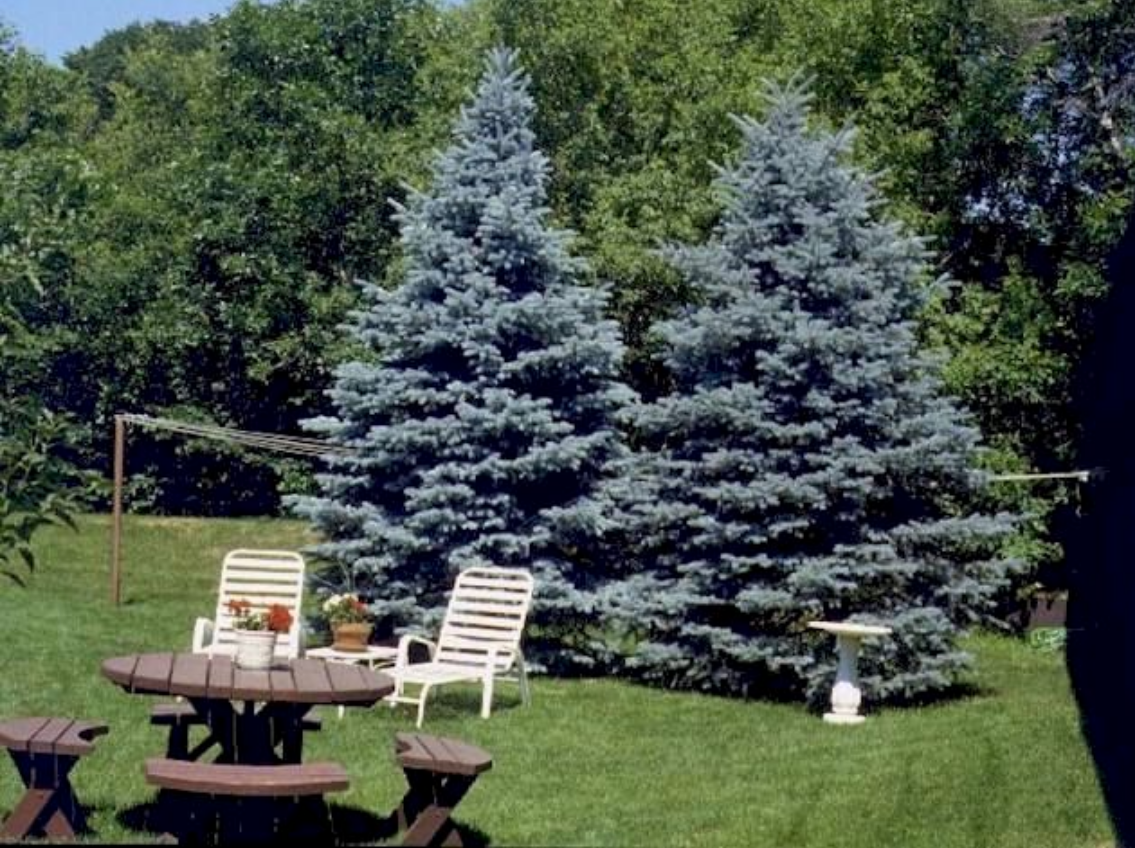 Blue spruce in the place.

Small seedlings require a different mode: several times a day and gradually, their roots are near the surface and dries quickly. Fir can and should be sprayed. If green thumb rarely appears in the country, the landing is better to choose a blue spruce: in the hottest period it is enough to water once in two and a half weeks.

Occasionally spruce pruning, procedure prophylactic is carried out in the early spring, once a year, prior to the growth of new shoots. This removes dry or diseased branches. Slight thinning allows sunlight to penetrate deep into the crown. Decorative trimming produce in the middle of summer, after growth of young shoots. You can cut the tip, if you want growth in width. All work should be carried out with a sharp tool, place a saw cut is processed with a solution of potassium permanganate, garden pitch. Thick branches are removed handsaws, small branches with pruning shears, for decorative cutting more garden scissors.

Diseases and measures against them

The most common diseases – fungi infection, which can lead to shattering of the crown and the plant dies. To defeat the attack, you must remove all the damaged foliage, diseased branches, cultivate the soil and the tree itself drugs, increase immunity. Root sponge or mottled rot treatment can not be, spruce tree cut down, stump uprooting, the soil is treated with fungicides.

Photo of different varieties of spruce 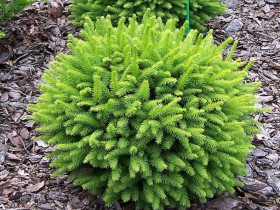 Spruce, the sort of “Uwe Hortsmann”. 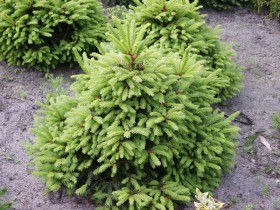 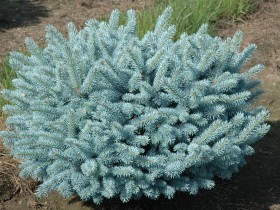 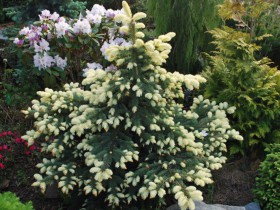 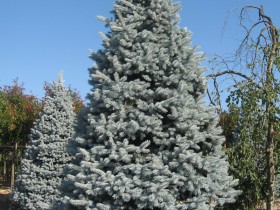 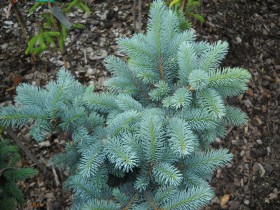 Blue spruce, the sort of “Hoto”.


You are here: > Plants > Trees > In the garden tree was born
See more materials, related articles: