Scrub botulinic in the garden.

Among gardeners and the sale in shops of the plant most often called, it comes from the Latin "ligularis". Before flowering botulinic looks, as flowerbed of the powerful, decorative leaves, then this orange island, creating a bright spot on a grass background. Plant high, powerful, it is planted on a separate clearing or in the background of a flower bed, in mixborders, on the shore of an artificial pond. Perennial herb of the family Asteraceae brings together a hundred and fifty types of. Most of them grow in Asia, in Europe and in Africa, several species in the Caucasus and the far East, on Sakhalin and the Kuril Islands.

In garden conditions, the plant feels better in partial shade, with regular and abundant watering, can grow in sun. Requires a moist soil, rich in nutrients, tolerates poorly drained clay soils, temporary flooding. In the spring work carried out on tillage and mulching. Summer need frequent watering and tying up heavy buds. If the soil is fertile – botulinic can not feed.

After flowering inflorescences are removed, due to this the plant increases the number and size of leaves, the decorative effect is maintained until mid-autumn. Then the aboveground part is cut. In preparation for the winter, the soil around the plant mulch.

Botulinic most common diseases and pests. Young leaves can eat off slugs, this is the only problem, able to upset the green thumb. The plant does not require winter shelter.

Propagated by seeds ligularia, which are sown in the spring, and division of the Bush. Seedlings bloom in the third or fourth year. Drop-off time – may and September-October. Plants can be transplanted in the summer, the aerial part is removed. The distance between the bushes when planting from half a meter to a meter.

The types and varieties of ligularia 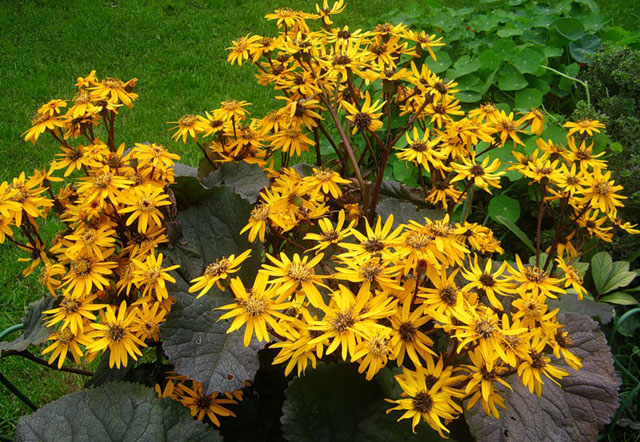 Botulinic gear, the sort of “Desdemona”.

Found in the wild in the far East. A perennial plant with a powerful bushes up to five feet in diameter and long peduncles. Leaves – rounded, thick, dark green. Flowers – bright yellow, inflorescence – racemose. Blooms in August, seeds germinate in two to six weeks, unevenly, temperature germination – up to 15 degrees. Planting material is photosensitive, it seeded, not closing up in the soil.

Perennial six-foot plant with Western China. Leaves are heart-shaped, sharp-toothed. Flowers – yellow, the inflorescence is a spike. Preventive shelter in the winter is desirable, although the plant is winter-hardy.

A visitor from Japan. The leaves are oval or rounded, to 25 cm in diameter, green. Inflorescence light yellow. Golden variety of botulinic Kempfer is cultivated on the black sea coast. The leaves are on long stalks, colouring – bright green, Golden specks, blooms in may.

It grows in the wild in Central Asia, in Western Siberia, in the far East. Likes the banks of streams and rivers, wet meadows. Basal leaves elliptical, with a bluish tinge, flowering time – mid summer. Flowers – yellow, collected in a whisk. View hardy, looks good in the background mixborders.

A native plant of Northern China, Mongolia, height – up to five feet. Leaves – graceful, much cut, petioles are red – brown. The inflorescences are yellow, spike. One of the earliest buzulukov, blooms in late June. Likes fertile and moist soil, in the garden, looks good on big flowerbeds and near reservoirs. 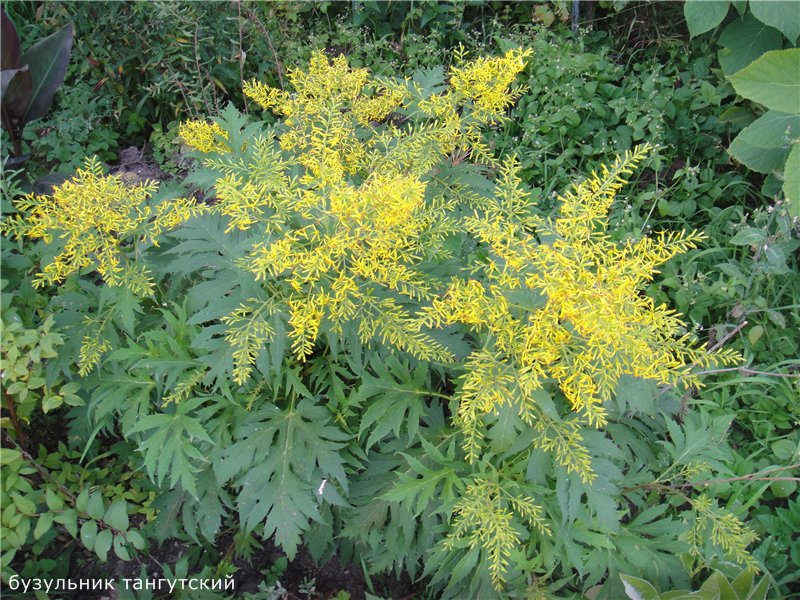 The plant is widely distributed in middle European latitudes in Siberia. Grows in grassy swamps, on the banks of ponds, in bushland, alkaline, subalpine and Alpine meadows. The height of the small – from 30 to 130 cm. Rhizome short, straight stems, green, reddish in the lower part, glabrous or pubescent. Leaf shape – cordate or triangular-cordate, reniform. The inflorescence consists of several baskets, ligulate flowers yellow. Flowering time – July-September, propagated by root cuttings and seeds. 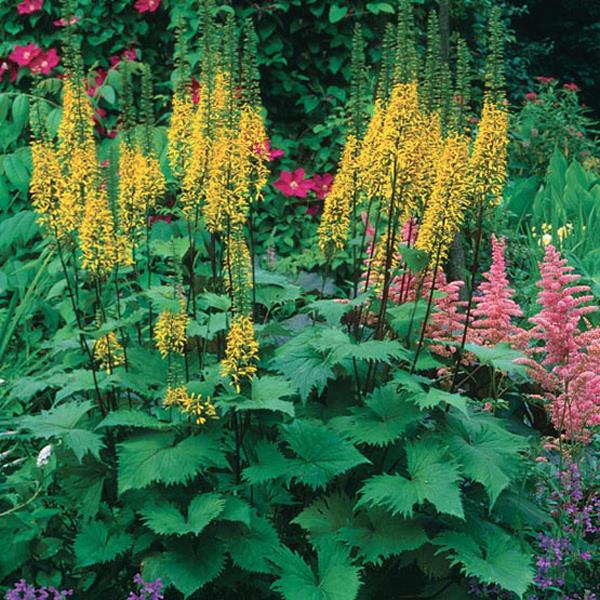 Grows on wet meadow soils, thickets and sparse forests. Rhizome short, leaves cordate-reniform, on the top of the pointed or rounded.

A hybrid of scalloped and botulinic Wilson. The flowers look like daisies, the leaves are heart – shaped, the Bush is large, height more than two meters. Blooms in August. The most popular varieties: "Lateran", "Gregynog Gold". 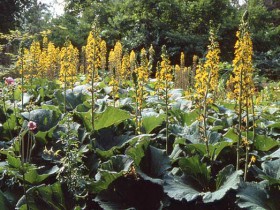 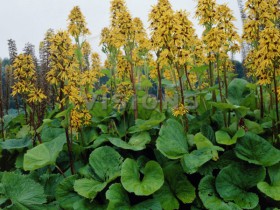 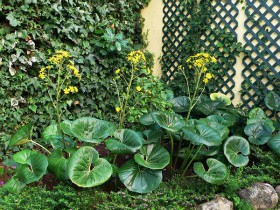 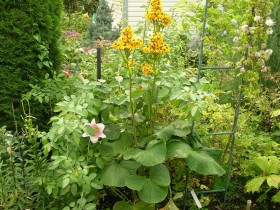 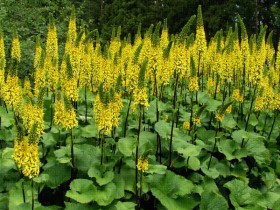 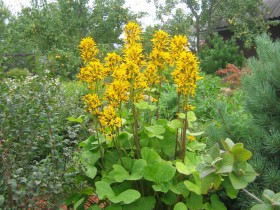 Botulinic in the garden, video