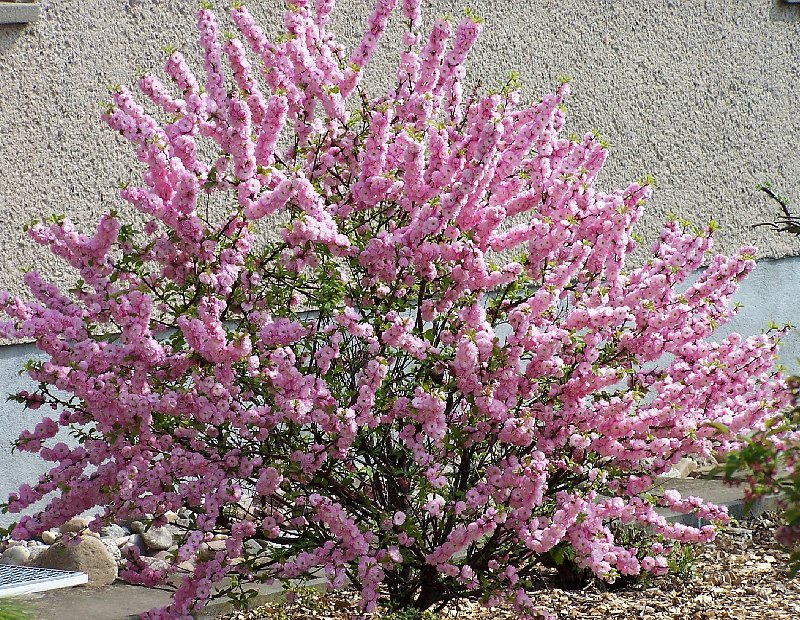 In the photo: decorative plum blossom.

Most flowering ornamental shrubs – leaseline, shed leaves in winter. The main time of flowering of the crops – spring, the beginning of the summer season. Only some plants bloom in late summer. Long-lived plants are pleasing to the eye from may-June until early autumn, evergreen can decorate the garden in winter.

Inland areas evergreen shrubs need protection from the wind, partial shade: in open areas they can be affected in the off-season, and in the winter time. Large-flowered rhododendrons for the proper development need a wet, rich in humus and humus, soil.

The conifers, in contrast deciduous and evergreen crops, there is an advantage: shrubs such undemanding to soil and climatic conditions. Extremely unpretentious mountain pine and common juniper. Yew grows well even in shade.

Siberian ginseng or ginseng barbed – culture high, can reach two to three meters. Prickly branches, compound leaves and green-white umbels of flowers bloom in June or July, in their place by small black fruits. This kind of not afraid of cold. 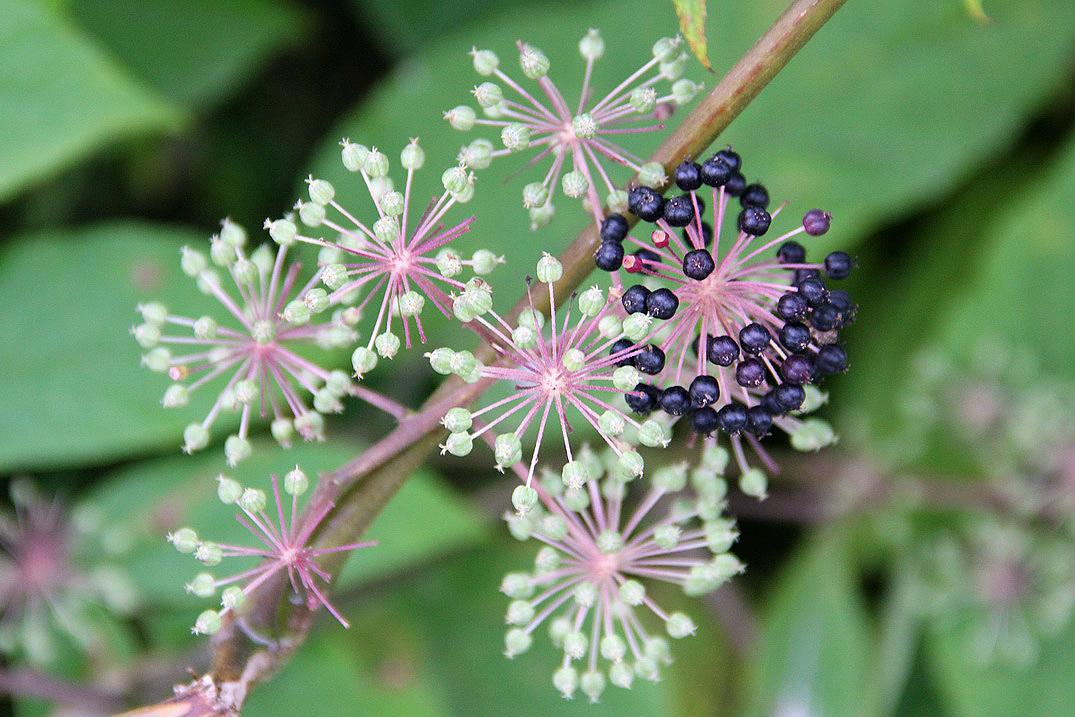 The shrub prefers fresh and rich in humus soil. Blooms in July and August, develops quickly, reaches a height of from one to five meters.

During flowering, it lasts from July to October, Bush attracts many butterflies. Branches widely scattered, the plant reaches a height of two to three meters. The flowers are arranged in long panicles. Every year, in early spring, the bushes are heavily pruned to produce new shoots and more abundant flowering. In winter, the plant is insulated. There are many varieties baddley David with rich colors. Even one Bush, blooming in late summer, able to give a special charm to a small plot.

Buddleja ocherednolistny or summer lilac. The shrub reaches a height of two to three meters, growing loosely, lanceolate leaves, dark green, bottom – whitish fuzz. Blooms in June. The best conditions are Sunny plot, protected from the wind, soil – scarce, not very humid. After flowering shoots are cut off with scissors.

Plant low, to 1,5 meters, flowers pale purple or white, are replaced by small fruits of purple. Culture moisture- and light. 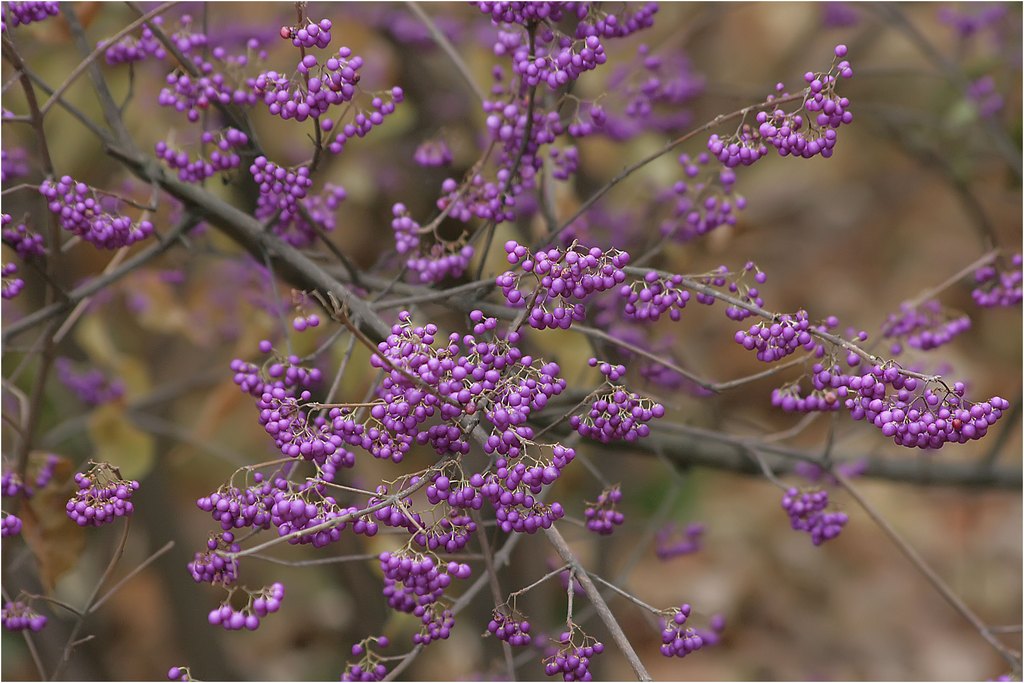 Low Bush, large greenish-white flowers decorate its from July to October. Hydrangea paniculata growing up to two meters in height. Large loose panicles are initially white in color, then become reddish. Flowering time: August-September. Culture loves rich humus, moist soil, grows well in partial shade, can die from the sun and lack of moisture. The best place for planting in the garden – a shadow in the area. Seedlings, planted directly into open ground, survives poorly. Better to put it in large tubs, and then planted in a shady area.

Fast growing shrub with densely planted with slender branches, tender leaves, simple yellow flowers, appearing in may. Does not tolerate dry soil, grows well in the shade. Shoots grow quickly, in General, the hive is convenient to use in a natural garden plantings. There are varieties with double flowers. 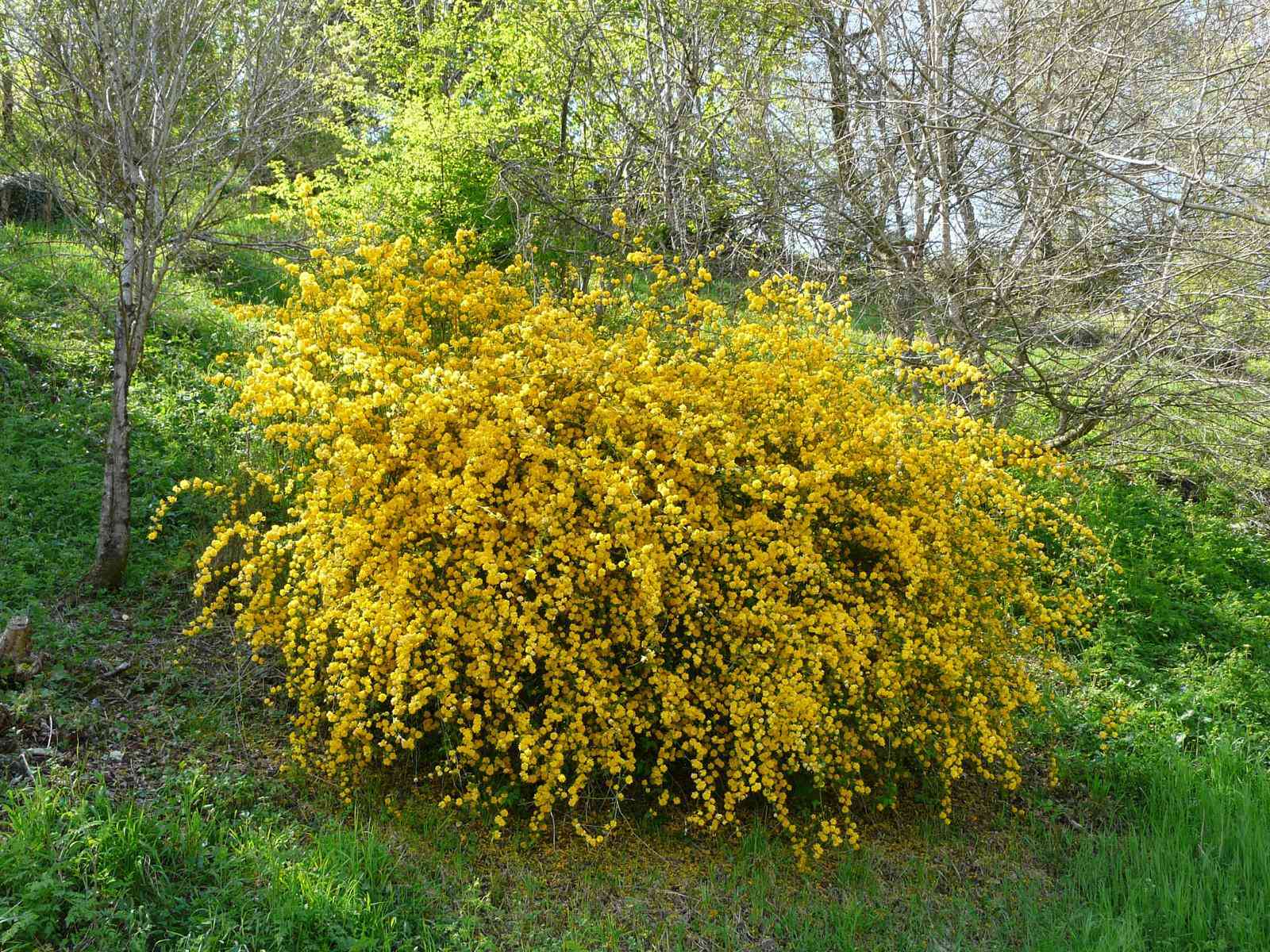 Almost unknown ornamental shrub up to two metres in height, actively growing in breadth. Bells pale pink, covered with yellowish spots, flowering time – may, June. Contraindicated too dry soil, in the shadows grows worse, than the sun. If you find a suitable piece of beauty – it will be an ornament to any garden.

Luxusnich – large shrub, branch – dark brown, sparse, plant height – up to five meters. Leaves pinnate, light green, in autumn they turn orange, yellow and red tones. Culture unpretentious, grows on dry, and in moist soils. Grows well on Sunny outdoor area. The root shoots are easily cut off with a shovel, you can use them for breeding. Ucesnik like space, it is planted on a plot of turf or next to the low bushes. 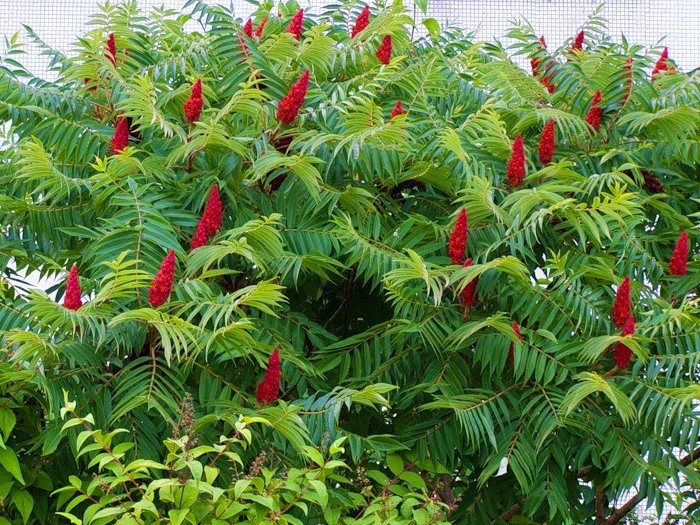 The plant blooms in April or may, height up to two meters. Very similar to the garden currants. On moist soil, plenty of fruit, tolerates shade, special soil preference no.

The well-known garden plant, needs care and constant attention from the gardener. For the small private gardens are suitable rose shrub, garden, dog. Grow well under favorable conditions, maintenance more, than other ornamental shrubs. Plants love the sun and loamy soil containing lime. Look good in the outdoor area, bloom from June until autumn. Depending on the kind of bushes can reach from one to three or four metres.

Yellow may rose and rose Apple Japanese yellow-red or pink-white flowers reach a height of one to two meters.

Dog or garden rose with white or pink flowers grows more than two meters in height, leaves – red-brown-blue, flowers Carmine-pink. The same growth can boast of a shrub rose or wild Scottish.

There are many varieties of these roses, refilled almost every year. Thick Terry or semi-double flowers in bunches are especially advantageous to look at the background of conifers or of deciduous and evergreen crops.

Moderately growing shrub – Kalina Korean. Height up to two meters, leaves and shoots covered with grey fuzz. The flowers are at first pink, then become white, the time of flowering and the end of April and beginning of may. Kalina loves the sun or partial shade, grows in cultivated soil, will enliven even the smallest garden.

Shrub up to three metres in height – fragrant viburnum. Growing, flowers – tubular, with a delicate aroma. Grows well in areas with little shading. Kalina common prefers moist soil, height – up to four meters. Neighbors of the plant are usually brittle Kruchinin, Euonymus europaeus, Privet. The leaves look similar to maple, fall is painted in a fiery red tone. Red fruits appear in may. Culture looks good in natural gardens in semidarkness or Sunny places. Known varieties of viburnum ordinary – "Roseum". Flowers – greenish-white, sometimes with a reddish tinge, Terry. Inflorescences so much, what branches under their weight bend down.

Ornamental plant grows in a very beautiful thick Bush, there are instances of up to eight meters in height. Grows slowly, tolerates severe pruning, from it form a hedge and a single landing in balls, pyramids, animals. For normal growth need moist soil, tolerate short-term drought. The plant is shade-tolerant, tolerates root pressure high cultures. Very convenient for shady front gardens and enclosed gardens. There is a dwarf form for use in the design phase.

Unusual wood culture with early leaf drop. Branches thick, beautiful hanging, can serve as design of the garden all year round. Flowers – bright yellow, similar to moths, exude a pungent smell. Broom or gorse blossoms in may, prefers sandy soil and Sunny areas. It tolerates severe pruning, in the winter time may suffer. 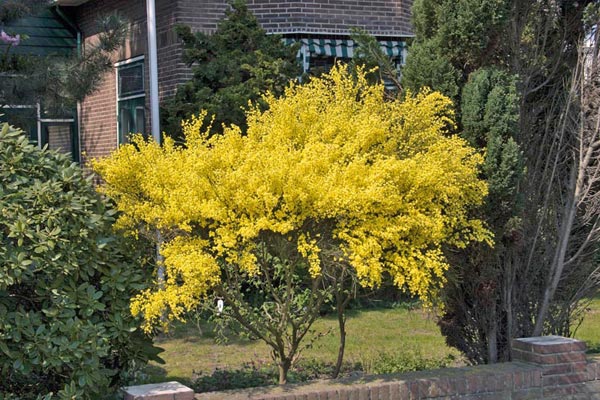 Tall crop with a leather-like sheets, surface – dark green, the lower part of lamina – light green, Matt. Inconspicuous flowers and the fruits of coral color, which persist on the branches until winter. Grows best in partial shade, under the canopy of tall trees. Butcher looks good in small group plantings.

This culture is the result of hard and painstaking work of breeders. Height from one meter up to three. The plant likes acidic soil, rich in humus, it grows well on sandy soils, fertilized with compost, humus or stagnate a bed of pine needles. You can make any fertilizer, but without lime. In dry and hot climates, it is necessary to choose polystannanes plot. In the open field culture is better not to plant. The soil under rhododendron can be improved by planting periwinkle or wild ginger. Plant-companion – Heather. Water the rhododendron is better established rainwater.

Yellow rhododendron and Japanese is summer azaleas with orange, yellowish-pink and yellow flowers, which appear at the end of April. Cultures are not evergreen. Rhododendron hybrid, and pointed to two species with small flowers, creating interesting garden composition. Plants companions: snow Heather, the witch hazel.

Most of these cultures – a little-known, they are so popular among gardeners, as rose or rhododendrons. But they are beautiful and not inferior in originality and effectiveness of the Queen and the kings garden. Every culture has its own, unique flavor. 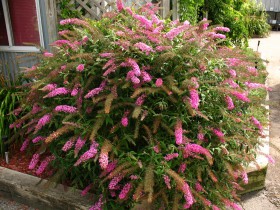 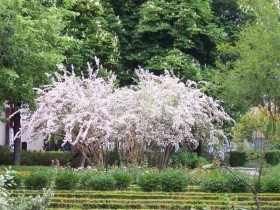 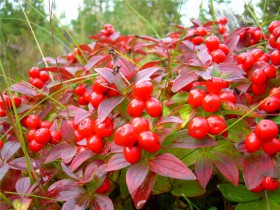 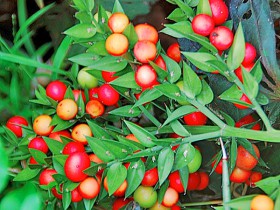 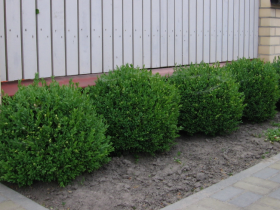