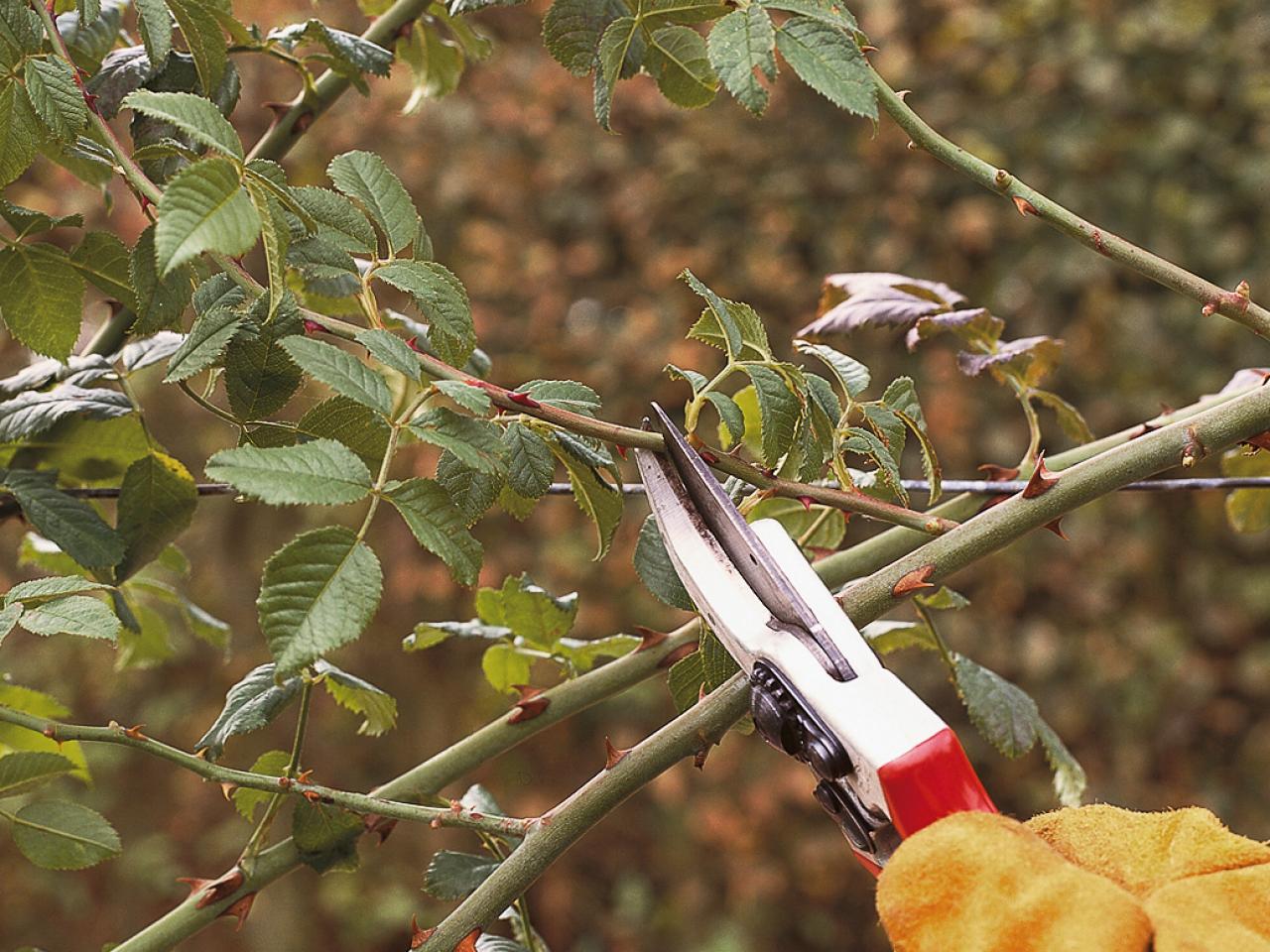 Beautiful plants adorn many of the plots, gardens and parks. Observation of blooming fragrant buds an unforgettable pleasure. Breeders annually propose to the cultivation of new varieties, different in form, and sizes and colors. In order, the plants long to please their owners, they need to be regularly trimmed, this is a mandatory procedure for the preparation is not the easiest season – winter.

This agricultural use is necessary to strengthen the plants. Spring pruning generates and refines a rose Bush, autumn procedure aims to ensure access to sunlight stems and buds of the plant, the winding crown, improving winter hardiness culture. Removing old branches helps the plant to develop new buds, of which in the summer will have a large and beautiful flowers. Pruning has a positive effect on the formation of a new, full shoots.

Procedure should be carried out not only in relation to roses, growing on the site for a long time. In need and young seedlings. To the Bush well and is properly developed, it is recommended to remove all the buds are not ripe, cut out weak and diseased stems. Defective shoots, which is left for winter, can rot in conditions of winter shelters. This will lead to infection and disease of the whole plant. After carrying out pruning on the Bush should remain a strong woody shoots from dormant buds.

Cut branches and other remote parts of the plant must be burned, to prevent the spread of fungi and pathogenic microorganisms.

It is necessary to get rid of old, three year old shoots, which have a large number of lateral branches, covered the dried bark.

In order, the procedure brings only positive effect, you must strictly adhere to the following rules.

Autumn pruning is carried out in windless Sunny day, most of it is done at the end of October. 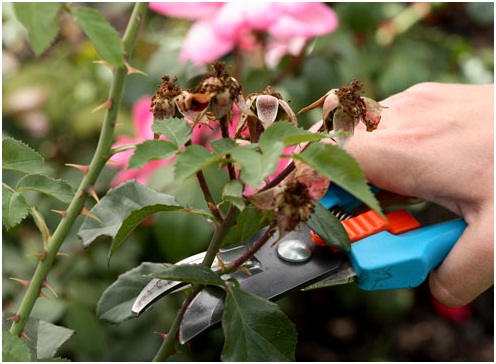 Before the procedure, the tools are preferably subjected to disinfection, rough surfaces can be a source of infections and fungi. Sufficient treatment solution of potassium permanganate, place slices covered garden pitch.

The most important rule, which must be guided not only by a doctor, but the gardener – "do no harm". The volume of the root system of the rose Bush, like any other culture, should be proportional to the volume of the aerial part. Pruning should take place discreetly and competently, that was not a dysfunctional food system, the damage which could result in not only sickness, but the death of roses.

During the procedure of removing excess branches it is necessary to take into account varietal characteristics. Type of pruning depends on the size and growth rate.

The method is applicable for roses palianov, their branches are prone to strong growth and tillering. After the procedure should remain only the base of the Bush with two or three sleeping kidneys. For other varieties this pruning applies only in the most extreme case.

Moderate method frees the plant from weak shoots and activates the growth of new, strong shoots. When holding the trim to the middle, the stems are pruned by half, at the base of the Bush remain shoots with four or five buds, plant height – up to 30 cm. The method is applicable to hybrid tea varieties, the exception is gardening and English roses, ancient and species of garden beauties in this family.

After the procedure at the base of the Bush remain high shoots with 8 – 10 kidney. Gentle pruning is applicable for old and species, Bengal rose, English, Park, vigorous hybrid tea. If you apply the method in relation to other varieties, it is possible to achieve early flowering. Constant long cuts for several consecutive years may lead to loss of shape and stretching of roses, flowering will be less abundant.

The purpose of the procedure is a continuous flowering during the growing season. The best way is a combined trimming: some stems are cut poorly, others much, to stimulate the growth of basal shoots, more late flowering.

In the fall I purchased a rose Bush pruned stems before planting, cut sick, damaged and just long roots. In mid-February – early March main shoots are shortened by three to five buds, the remaining height of shoots – up to 20 cm. Sick and weak growth is also removed. In April-may there will be new shoots. In September-October, pinch out main stems, remove all netsvetuschie, neodrepanis shoots.

From mid-February to mid-March next year removed diseased and dead parts of the shrub. Basal branches are cut by a third, young stems – three to five buds, lateral branches on two or three buds. In October, pinch main stems, removed netsvetuschie shoots.

In the third year and beyond is carried out rejuvenating pruning in the fall. Apart from medical treatment are shortened all annual basal stems by about one-third the length.

The flowers of this shrub bloom on shoots of the current year and the past. When planting, all weak stems should be removed, a strong crop of three to five buds. The purpose of pruning is to make the flowering tree as compact as possible, to save him from the thin growth. Purchased in the spring, roses pruned diseased and damaged roots, and after landing a permanent place of growth, remove all weak growth, this frees up space for new, strong shoots. During the summer season faded flowers are removed, to keep nutrients for the remaining. At the end of the growing season, all flowering shoots pinch.

In the second year and beyond in the spring shortened by one-third the length of the strong shoots all, removes dead and weak, thin out dense center. Weakly growing bushes cut short in the spring: leave two or three buds on the strong shoots, and one or two on low. With this method of care rose comes well-branched shoots and gives, that bloom in the current season. Adult bushes polyanthus roses should not have more than eight shoots. Vigorous varieties should be subjected in the first year of light pruning. In the subsequent period, removed weak and old branches.

The goal of pruning this type of rose is the removal of strong shoots, which can break the symmetry of the Bush. Have purchased plants shorten long shoots to three to five buds, remove weak growth. In the warm period of time the bushes are cleared from the dying blossoms. In March of the following year removed damaged and weak shoots, strong – pruned to three to six buds. 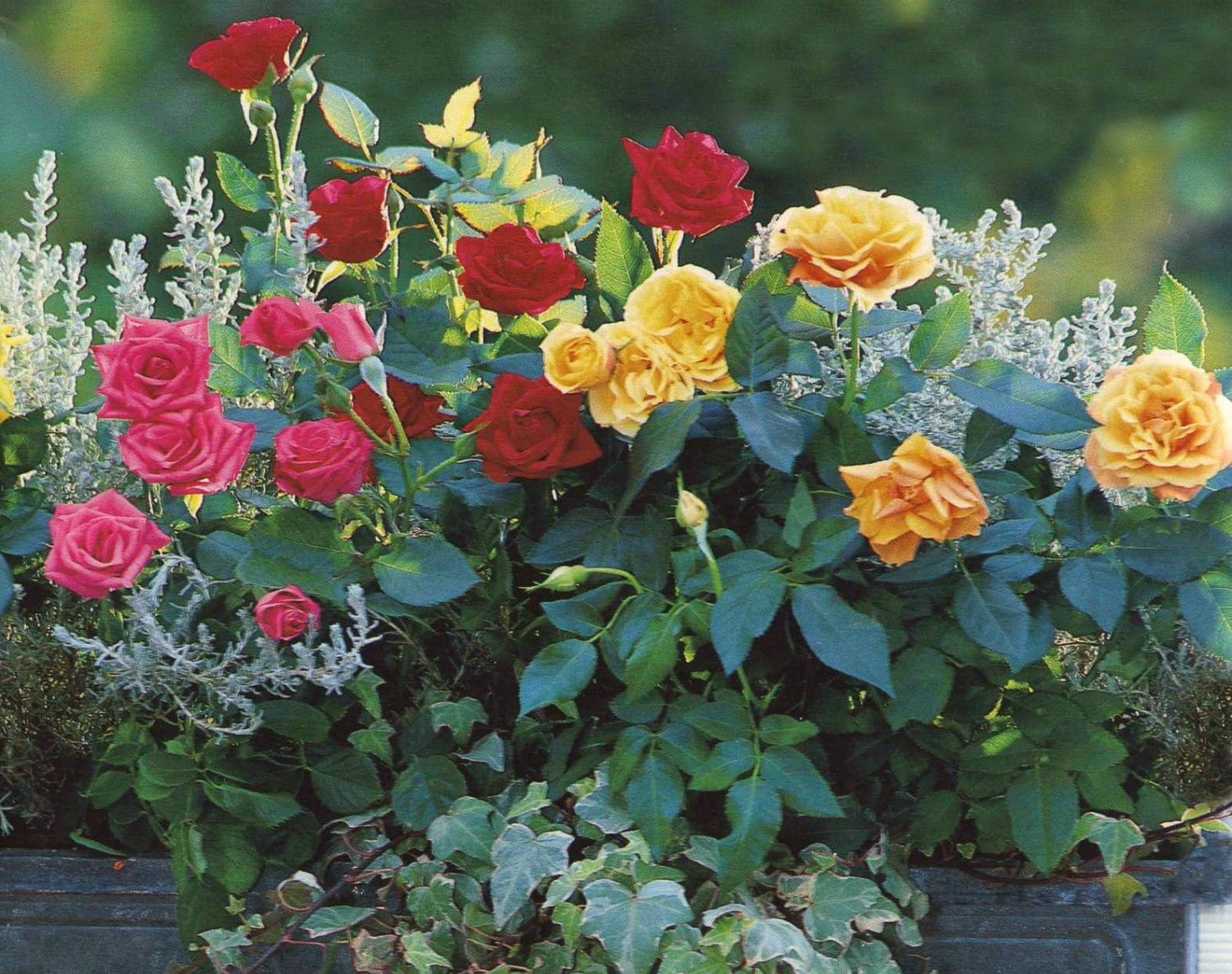 The purpose of the procedure is stimulation of formation of new growth, replacement netsvetuschie shoots. Some varieties are undemanding shrubs bloom in June-July, remontant species until late autumn. Some garden roses form a colorful fruit. The dying blossoms, in this case, not deleted. Four rules of trimming:

The choice of the method of trimming in winter to lianovidny, climbing roses depends on the varietal identity of the plant. Small-flowered climbing roses do not need pruning, grandiflora is shortened by a third of the length, other species – halfway.

Groundcover roses don't need pruning in the autumn. It is only necessary to cut the shoots, which have lost decorative effect, and broken, sick and not ripe branches. During flowering you must remove part of the buds. To achieve flowering for the entire length of the stem, Bush must be placed on a horizontal support or pin shoots to the ground. After planting, remove weak lateral shoots.

For standard roses choose the way, based on the group characteristics of grafted roses. Varieties need good support, crown they have a heavy. Initial pruning of bushes – the same, like other types of. In subsequent years, make a strong or moderate pruning, trying to get a smooth and symmetrical crown. 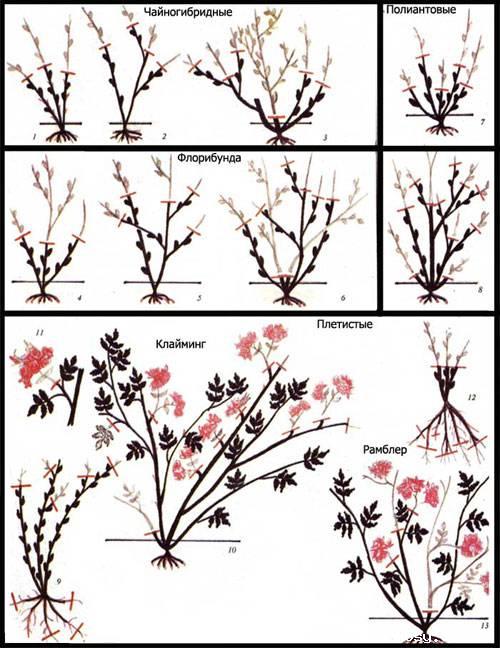 Photos of different varieties of roses, in need of pruning 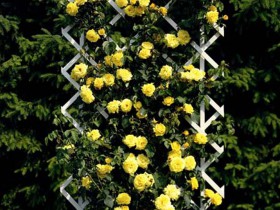 Climbing rose on a vertical support. 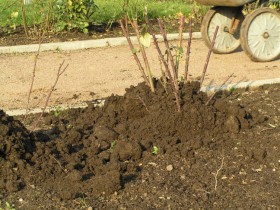 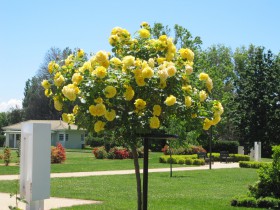 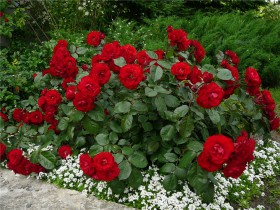 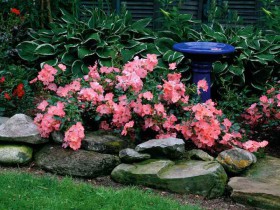 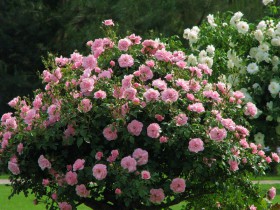 How to trim rose, video