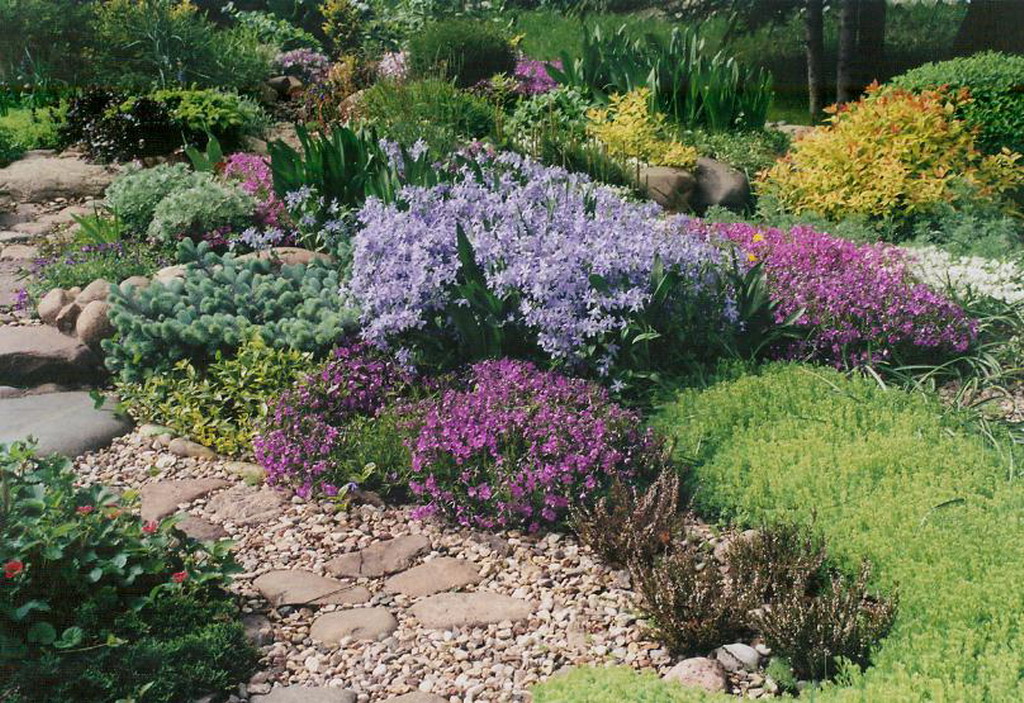 In the photo: bells in the garden landscape.

The Botanical name of the flower is a diminutive of the Latin and Italian "bell". In people, this flower always loved, in different localities the plant bears different names: chobitky, ecognize, bells, cinelike. There is even a belief, what time of the year, on the night of Ivan Kupala, they call.

Stems herbaceous plants branched, or simple, inflorescences paniculate, racemose or solitary. The Corolla is funnel-shaped, rarely almost flat, fruit – capsule. The species forms numerous seeds, which remain viable for up to four years. Most of the cultivars refers to lattelenet, vegetation starts in the spring, at temperatures above zero., and ends with the onset of frost.

Another group sineserye, plants retain the ability of vegetation throughout the year. The bushes in the autumn can be transferred into heat, they all winter will be green, will bloom in April. These are the types of, as the bell medium, Gargan, povoynichkovy, bells Radde and Kemularia. These can be recommended as a pot.

For planting the soil is dug up to a depth of 30 – 40 cm, weeds are removed. If the soil is clay, then you will need to add peat and sand. These soils contain enough nutrients, too much fertilizer is not required. In the loose, sandy soil add peat, grassy land, the muddy pond ground or humus. Fresh manure and peat does not make, they may be fungi.

Most species of Bellflower grow well in acidic soils, bell cut and bearded – weakly acidic soil. Types, growing in the wild on limestone rocks, these include bell Treasury, Kemularia, Osh, need alkaline soil, before planting, the ground it is better to proizvestkovat. 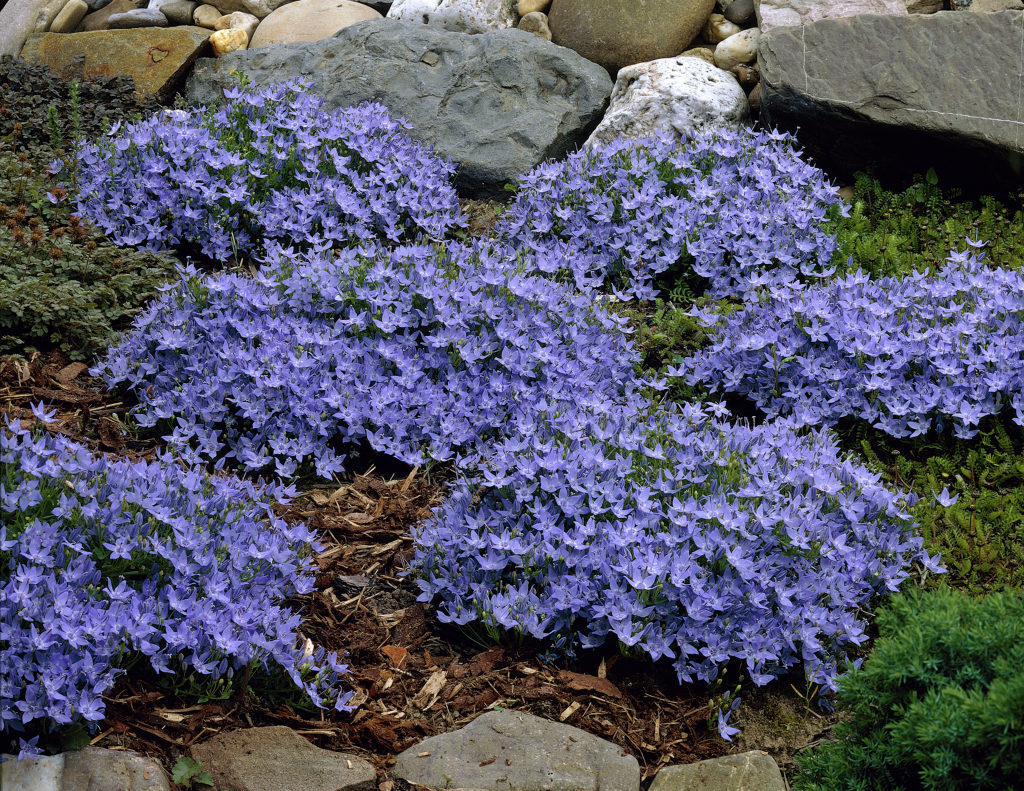 Bell Gargan among the stones.

The care and reproduction

In the spring the plants fed with nitrogen fertilizer, pour under bushes ash and rotted manure based 400 g 10 square meters. Before the beginning of the budding will be useful for feeding mineral mixture. Before flowering spend weeding and soil loosening. Most of the bells in the Central cost without irrigation, in the hot summer quite moderate soil moisture. The flowering period can be extended, if the time to remove faded flowers and dry flower stalks. Shoots, left on the seeds, cut after, both boxes will poborot, but before, as they burst. At the end of September or beginning of next month, all the stems are cut at the root.

Transplant bells are produced in autumn and spring. After the snow melts transplanted those types, which have a strong root system: bell crowding, broadleaf and other.

Species with less developed roots, such as the Carpathian bell, polymorphic, rotundifolia, logicsociety, average, Gargan, it is better to plant in may, after, as the soil warms up. Fall transplanting are produced in late summer or early September, plants need time to root before the frost. Some species can be transplanted throughout the growing period, even if the bluebells are in bloom. When digging the plants are removed with a large lump of earth, prepared hole well spill before and after planting. 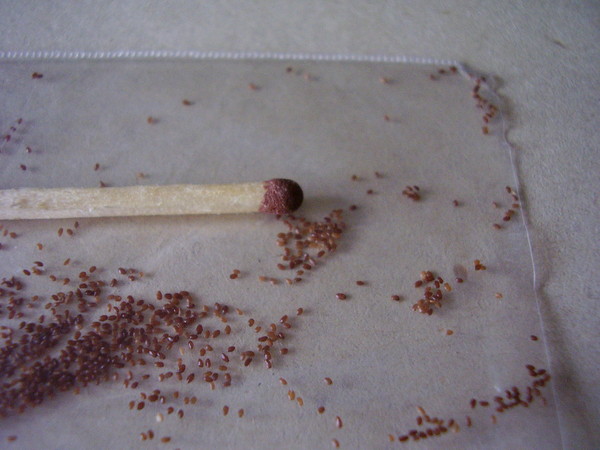 The seeds of bell.

Bluebells can be propagated by seeds, segments of rhizomes, dividing the Bush, root suckers and cuttings. The choice of dose depends on the characteristics of the varieties and species. Annuals reproduce by seeds, biennials – cuttings and seeds. Among the perennial species vegetative motionless and categoreye sternebrae plants, which can be propagated only by seed. Korotkodnevnye reproduce not only by seed, but green cuttings, dividing the Bush. Dlinnokornevischnye, weed forming and selenobrachys can be propagated in any of the following ways.

Box bells are harvested prior to their opening. Dried seeds are poured out themselves, they are very small, before sowing, they can be mixed with crushed chalk and washed sand. Planting materials are sown in spring or fall directly into the ground or in a flower garden for growing seedlings. The beds should be prepared in advance: earth – nourishing, well dug. Scatter seeds on the surface or a little added dropwise, they can also be filled with sand.

The best time for sowing in the spring – may, fall – second half of October. Germination time in the spring to 12 days, podzimny crops to grow two weeks after the thawing of the earth. Seedlings should be thinned, they dive after the appearance of the third leaf, distance between plants – 10 cm. In the winter, seed can be sown in boxes with fertile land, lightweight and breathable. In the winter boxes with plantings was added dropwise in the garden, Harbor film. In the spring the film is removed, and the boxes pritenyayut from direct sunlight. The seedlings in the garden in a dive in June, the following spring they moved to a permanent place of growth.

For greenhouse cultivation of seedlings seeds are sown in March. Boxes for dive filled with a mixture of turf and leaf soil two years with the addition of sand and weathered shallow peat. Seedlings appear after 12 – 15 days, additional organic fertilizers do not contribute. Raspolirovki seedlings are planted in the ground in early June.

Plants, propagated vegetatively, allow to plants, just repeating all the properties of the ancestral. This is valuable for double and semi-double forms, that do not form seeds, South bells, do not Mature in the North. The plants are divided and transplanted in the third to fifth year of vegetation. Some types of bells, such as speckled, personality, Takeshima, reponsibility, crowding, can be divided in autumn, in the first year after flowering. Bush divide in August or early may, the plants rooted to the early frost.

The process of dividing the hive: have dug out the mother plant and remove aboveground shoots, the plant itself is to cut them out with a shovel or knife. Each new plant should be several kidneys resume and developed root system. In this way divide the bell golovkovo, crowding, prodolgovataya.

The process of dividing rhizomes: dug plant is divided into segments with the kidneys resume, planted in shallow grooves. Buds must be on level ground. So come with bells raunatinum, pricelistname, logicalhostname, Kemularia. For propagation by cuttings use young shoots. 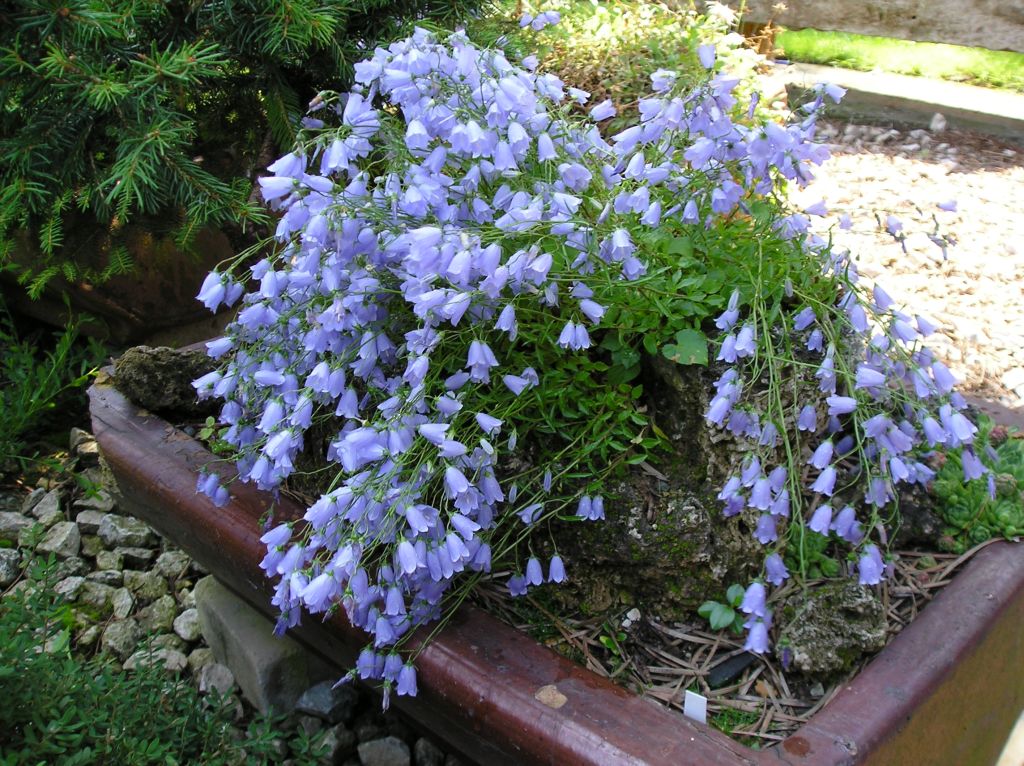 Bell lozhechnitselistny in the garden.

Bell molochnicy inhabits the subalpine and upper forest belts of the Caucasus mountains and Asia minor. Plant up to a meter in height, categoriae, the stem is highly branched top. Flowers – to 3 cm in diameter, the colors – from purple to milky white, inflorescence broad. Blooms profusely in June and July, in August, seeds are formed.

Bell krapivinsky grows in mixed, the shady forests of Europe, North Africa, Western Siberia. In people, this form is called the bell of upland, large, golana grass, goose neck. Its leaves and roots can be used for making salad, the young greens for soup.

Bell persinality it grows in forests and on the edges of the Caucasus, Europe, Western Siberia. Height – meter, leaves – dark green, female. Flowers – white or blue, the Corolla is wide, withdrawn garden forms with double flowers. Flowering time – all summer. Fruit – capsule, ripening in August or September. Young, to preserve the decorative faded flowers are removed.

Bell Pozharsky distributed in southern Europe, in the Balkans. Forms a dense cushion 15 – 20 cm in height, the leaves are heart – shaped, peduncles numerous. Flowers – broadly, star-shaped, light blue or plum. It blooms from July until the end of the summer, abundantly. For garden plantings used in large-flowered varieties. 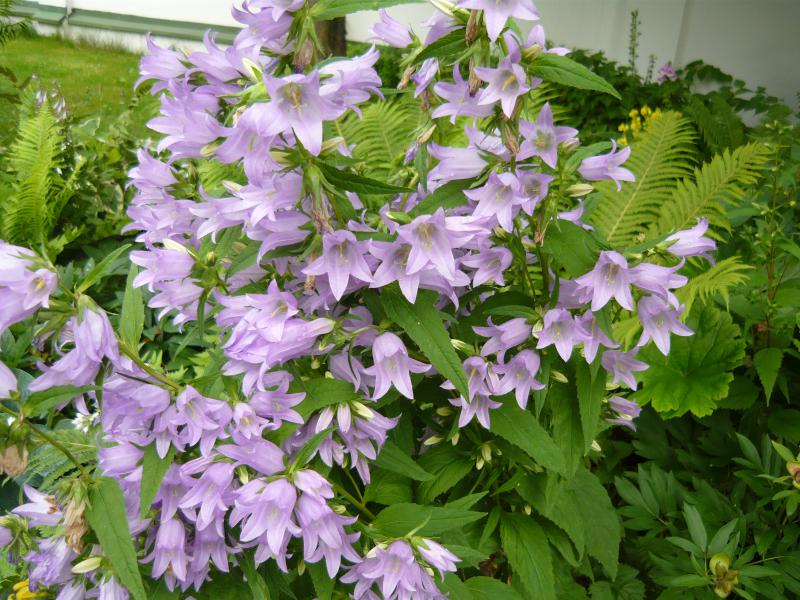 Culture is rarely damaged by diseases, in many farming on the same place in the soil can accumulate microorganisms, which can cause the death of plants. Get rid of Fusarium, sclerotia, Botrytis and other fungi by using double, held in spring and autumn, treatment of soil and plants with a solution of fundazol. In wet weather the bluebells can appear drooling pennica or slugs. Slugs will help superphosphate, scattered at the foot of the stems or decoction of Cayenne pepper, from pennisi will help garlic infusion. 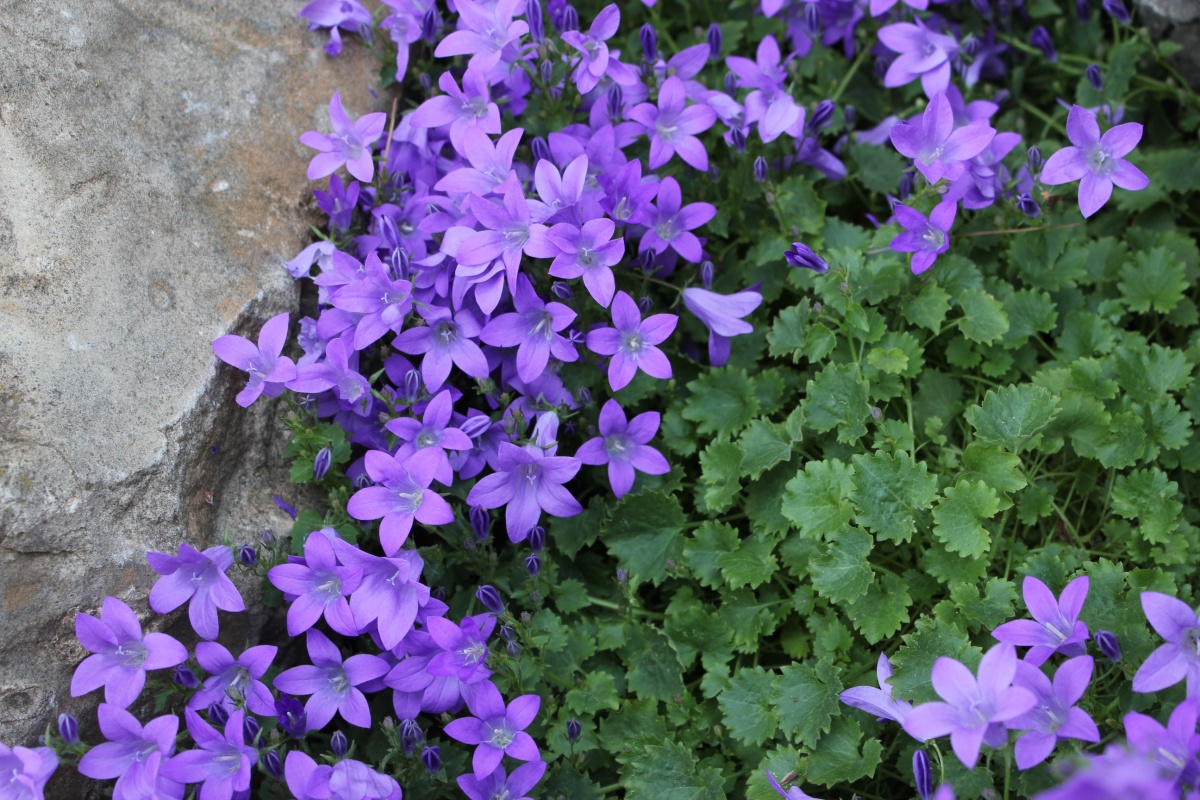 Bell Portenshlaga on the site.

The bell in the garden landscape

Culture can be used as a specimen, for this purpose, choose a tall plant with beautiful flowers and leaves, can long to bloom and keep the decorative. Lush Bush can to put in the pond and on the lawn, at the fork in the tracks. Appropriate types:

On the background of dark foliage shrubs and trees effectively is the Bush monocrotofos or medium bell. For single planting, you can use the bell tirsovidny.

Group planting can decorate any lawn. Tall plants serve as a smooth transition from shrubs to grass, shade tolerant species will liven up any corner of the garden. The band looks better, if planting is done as a natural composition with the winding circuit, the density depends on the type.

High bells are planted at a distance from 45 to 60 cm, loose groups, medium-high plants in the distance 30 cm from each other, low – up to 20 cm. Simple landing made from the same species and varieties, more complex multi – , with different flowering period. Plant-partners: Trollius, lychnis, Daisy.

In the flowery ridges the plants are planted in staggered or long rows. Ridges are placed on the lawn, from retaining walls, sites, on the lawn. Planting can be bilateral and unilateral, multi-tiered or single-tiered. On the far side of the place the bells of Bologna, krupnomery, broadleaf, pyramid, molochnicy, tirsovidny, krapivinsky. Closer to the front side are appropriate bell Altai, Carpathian, Siberian, border, divergent, Gargan. If the background is a hedge, the ridges can be designed bells chesnochnitse, Sarmatian, pale ohranyi, lyrate, crowded.

Numerous, flowering bells can be a real highlight of the garden. 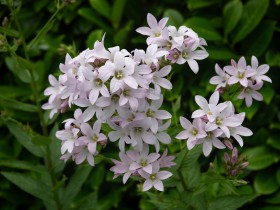 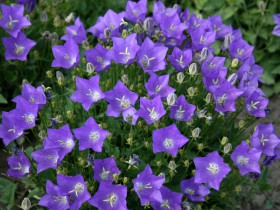 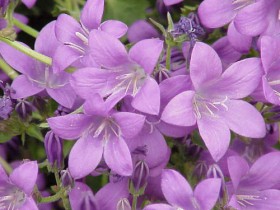 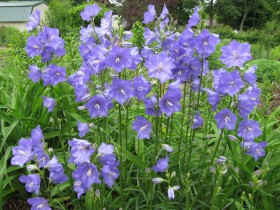 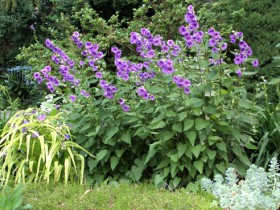 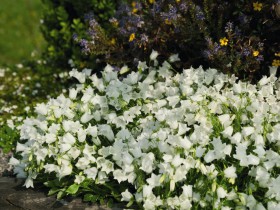