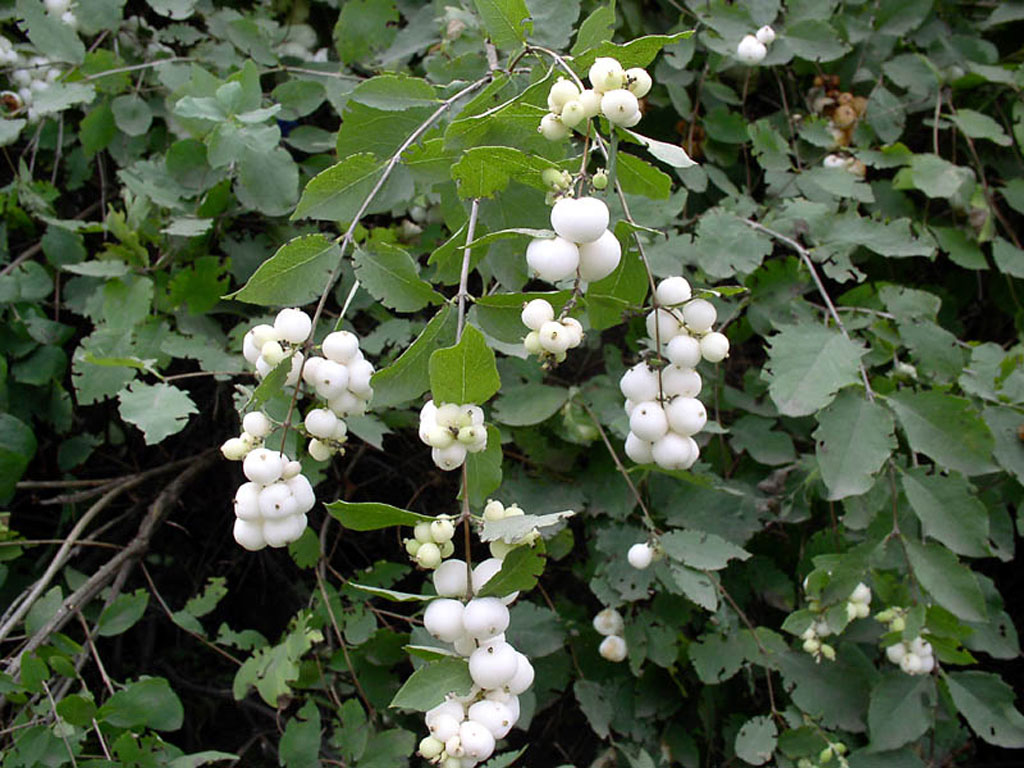 In the photo: the snowberry in the garden.

The original plant used to decorate parcels for over two hundred years. Culture unpretentious, decorated with fairly large berries, which cover the whole Bush until spring. The Latin name translates as "fused fruit", lyrical "snowberry" Bush received due to the white color of the fruit. The name extended to the types, the fruits which are red in colour. The life expectancy of snowberry – from 50 to 60 years.

Little known the snowberry rounded at home, in North America, coral berry or Indian currant. It is a tall shrub with small dark green leaves, thin branches, berries covered with a glaucous bloom. Culture is beautiful in the autumn the leaves turn purple, coral berries are located throughout the length of the shoots. The variety is less winter-hardy, than white, but it can grow in the middle lane.

The snowberry carpal or white reaches a height of five feet, dissolved, in early spring, foliage – light green. Blooms continuously from mid-summer to September. Decorative culture give fruit, under which weight the branches bend gracefully.

There are other types of plants with white fruit, but they are inferior to its decorative properties the snowberry carpal: fruit less, varieties less hardy.

The small-leaved snowberry distributed in Mexico and Guatemala. It is the southernmost species of the genus, can grow in the highlands, fruit pink.

One of the most striking and picturesque shrubs of this family – snowberry varieties "Dorenbos made of pearl". Shrub height is half a meter, thin shoots, bendable. The flowers are inconspicuous, pink pearl berries ripen in late summer. 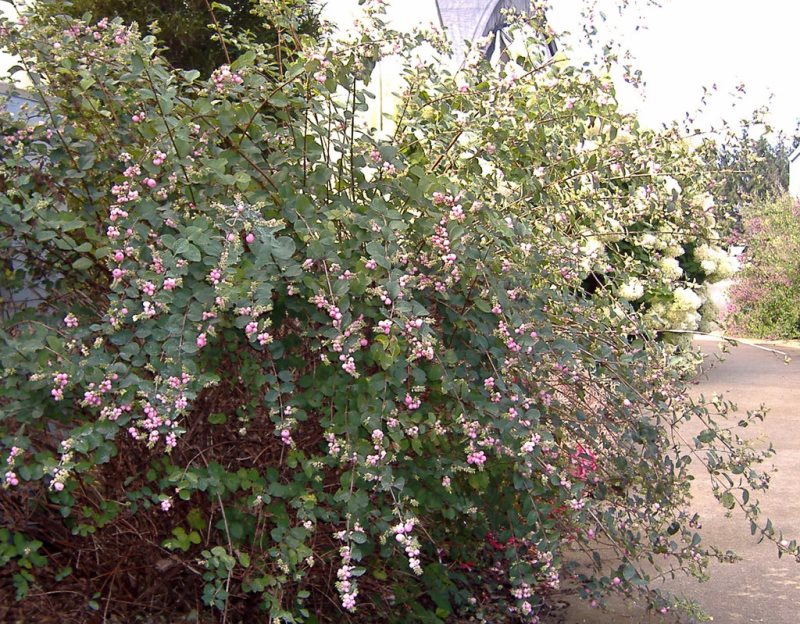 Undemanding plant can grow on calcareous, stony soils, does not require watering, prefers partial shade. It tolerates pruning, recovers quickly. Forms dense groups through root suckers. Care is the proper formation of the crown, removing old branches and extra root seedlings. Figure pruning is best to start from the age of three. Need watering the bushes in the first days after planting, young plants.

In the spring, you must dig up the tree trunks circles, to make fertilizer: humus or compost, superphosphate and potassium salt.

Snezhnogorsky useful in producing gardening, as they are good honey plants. Plants companions: high bushes, low trees with dark green foliage, conifers. From the primary culture or with the addition of others can create elegant and dense hedge, to build a curb. The distance between plants in the group – from 0,7 to 1,2 m, in the fence – twice as less. The plant can be planted to strengthen the banks and slopes, it is well suited for cutting, sprigs of long standing in the water. 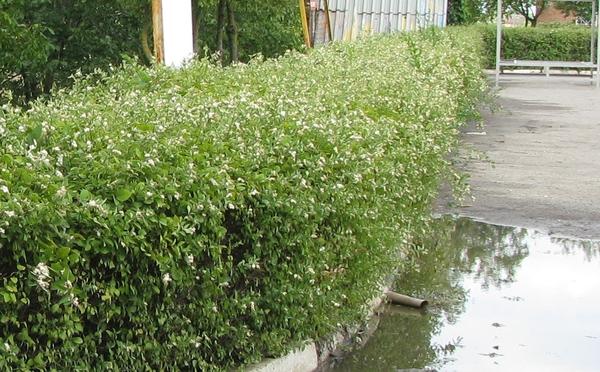 A hedge of snowberry.

The care and reproduction

Propagated snezhnogorsky offspring, cuttings, dividing the Bush, seeds. In the latter case, immediately after harvest the seeds are sown in pots, boxes or directly into the ground. Top crops sprinkled with dry leaves, sawdust and leave capacity for the winter under the snow. Seedlings appear in the spring or the year after. First, the culture grows rapidly, reaching a meter in height in the third year. It is possible to plant seeds in the spring, in this case, the stratification.

The easiest way is to divide the hive into two or three parts together with the root system. Bends can be obtained with hilling, their primalac to the soil soft wire, plants are beginning to take root. Vegetative planting neck of the root system should be level with soil. Soil – moist, the standard mix: turf ground, sand, humus. Necessary drainage from rubble.

The most popular method of reproduction – cuttings. Segments of twigs harvested in late autumn, for the winter are placed in the basement, in the sand. Length of branches up to 10 cm, the number of kidneys from three to five. The cuttings are planted in the ground, mixed with river sand to a depth of 3 cm, the container is placed in a greenhouse or a greenhouse with tinted Windows. 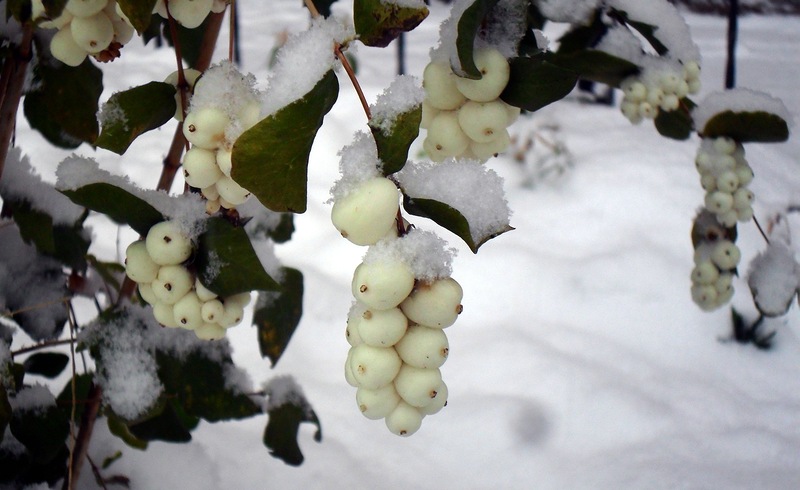 The snowberry in winter.

The snowberry – smoke- and by gas resistant plant. Thanks to this feature it can be used for planting in urban environments, near Parking lots and gas stations.

The snowberry in winter

Few plants remain decorative even in winter. Culture holds its fruits on branches in winter, decorating the garden and yard. Berries readily eaten by birds.

Photo of different varieties of snowberry 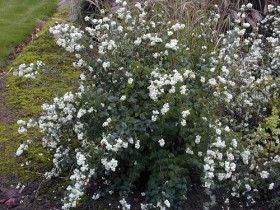 The Snowberry Dorenbos, the sort of “white Hate”. 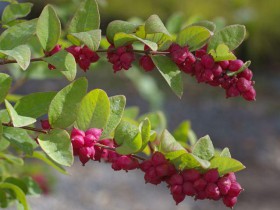 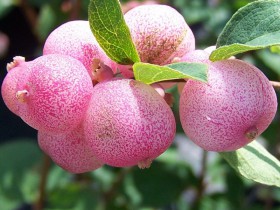 The Snowberry Dorenbos, grade “made of pearl”. 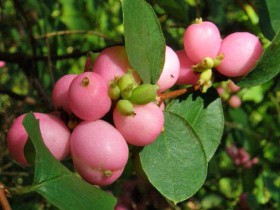 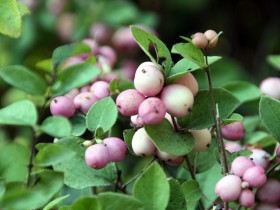 The Snowberry Doorenbos, the sort of “Amethyst”. 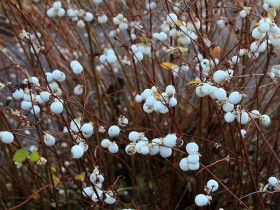 The snowberry white in autumn.