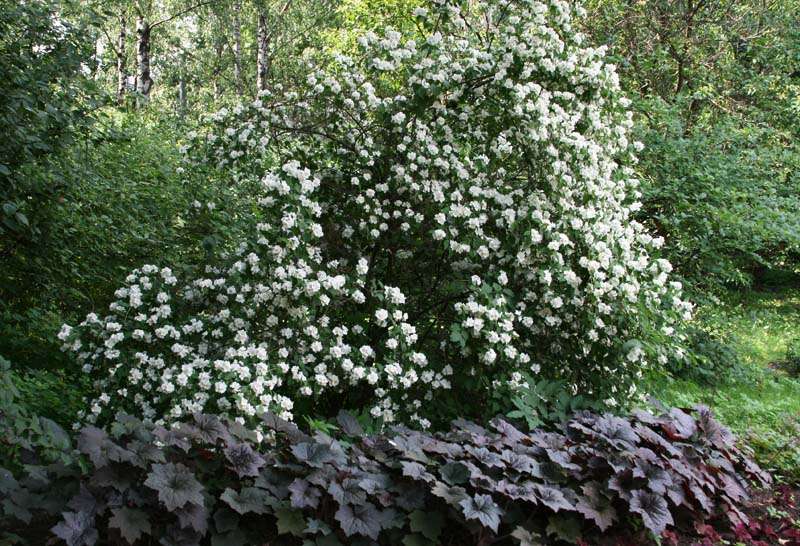 Mock orange in the garden.

The Latin name of the plant comes from two words "brother" and "love", this indicates the presence of closely spaced oppositely shoots. In the culture of the mock oranges were introduced in Malaya and Eastern Asia, in Central America, in the twelfth-thirteenth century. In Russia, the bushes spread along with roses and lilacs, the landing was decorated with knights and Royal gardens. In Europe, plants of the Asian and American origin appeared in the first half of the nineteenth century. Description of species and varieties of garden mock orange is given a prominent place in European horticultural and dendrological literature.

Filling your garden a wonderful aroma of mock orange shrubs can be of different size and shape. One is the combination of tenderness and practicality. Some varieties of plants can be the basis for the construction of hedges, to create a wonderful landscape compositions.

The most popular varieties

In addition to traditional fragrant flowers, this mock orange has bicolored leaves: the Central part of the plate green, the edges are bright banding. Flowers – white, with a creamy middle. Crown spreading, dense, diameter up to two meters and a half. The variety blooms in may and early June. In August, the spot colors appear in the boxes with seeds.

"Variegata" grows well in partial shade and full sun, does not like stagnant water and low temperature. Supplemental feeding with mineral fertilizers and manure reacts lush blooms and rapid growth of the crown. In the winter culture in need of shelter. Planting done in the spring, before the appearance of the foliage, or in the autumn season, from mid-September to October. Grade is used to construct hedges, create a beautiful garden compositions.

From the name blows cold and romance. The feature of variety in that, the whole shrub in the flowering period literally hiding tassels white Terry colors and really resembles a snowball. Leaves – monochrome, bright green. The variety also can not stand wet, stagnant soils, loves the sun. "Snow storm" has good frost resistance, in the shelter need only a one-year seedlings.

Shrub height up to three meters, blooms in July, needs removal of shoots older than four years. The plant is susceptible to aphids, requires timely processing. This variety can be used for single landings and for forming hedges. 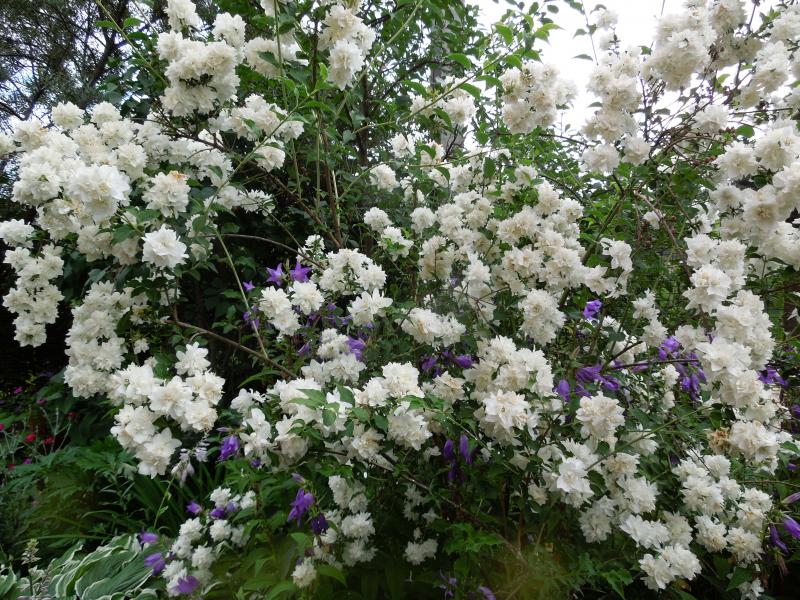 Chubushnik coronal unusual color of the leaves: in the spring they are yellow, gradually green, and in autumn and fall off the green. Reverse the sequence of the change of color is very original and draws attention. Flowers small size, inflorescence not visible on the background foliage. Fragrance – magic, plant height – up to two and a half meters, blooms in late may. The growth of young shoots can be accelerated by removing old branches. Variety requires regular watering, fertilizing.

The flowers of this variety by the standards of mock orange is huge – up to seven centimeters in diameter. Foliage green, bright, branches red – brown. Height a small shrub up to five feet. The variety grows well in the middle lane, and the South. Tolerates winter temperatures down to – 25 degrees. Prefers fertilized soil, Sunny areas of the garden. The low height of the culture allows its use in the design of gardens and for planting in flowerbeds.

Flowers varieties, so the original name is very similar to the bells. They can be traditionally white or cream, stamens – bright yellow. Aroma reminiscent of the smell of strawberries, for this reason, the shrub is often called strawberry. Height up to two meters, blooms in early July. Agricultural practices – the same, as for the other varieties. The peculiarity is, that strawberry mock orange grows well in the shade. Disease resistant, hardy, grows well in Central. Can be used in single and group plantings, they make beds and lawns. 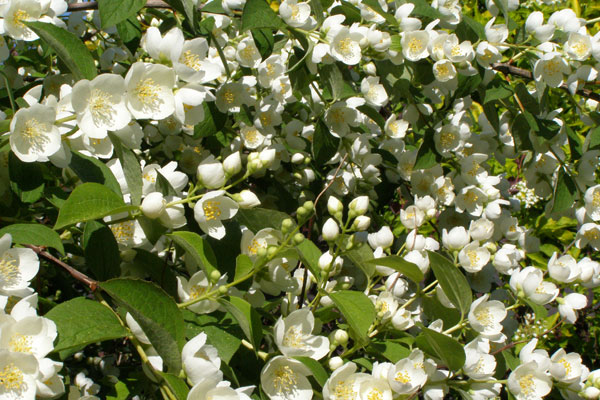 Grade Gordon boasts a delicate and light flavor. Quality decorative plants not only underlines white flowers, but also large glossy leaves. The bushes high, up to four meters, it blooms in mid-June. Require regular removal of old branches, mock orange is more like a Bush, and spreading tree.

A hybrid of common and small-leaved mock orange. The crown reaches a diameter of three meters and a half. The flowers are white, very strong flavor. The leaves are dark green, large, turn yellow in the fall. Can bloom twice a year in a warm and prolonged autumn. Tolerates partial shade, hardy. Used to create hedges, clearance sections, looks great next to other types and varieties of mock oranges.

Ananthous grade. The Bush is stunted, up to half a meter, has bright leaves, small, gear, Krone dense. Variety is very winter hardy, tolerates all types of soils, requires almost no maintenance. Used to create small borders, landed on beds. The feature of variety in that, that due to good branching shrub can be subjected to formative pruning, giving it a different shape. 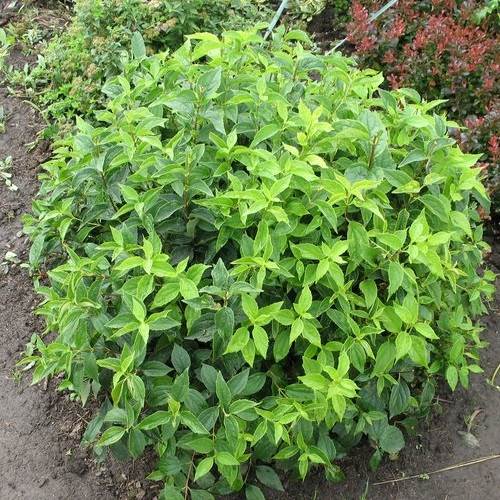 Flowers semi-double, white, inflorescence large. The oval leaves, green, size – medium. Branches spreading, durable, plant height – up to 1,8 m. Requires annual pruning. Loves Sunny places, in the shade does not bloom. The variety is hardy, grows well under medium latitudes, not tolerate acidic and saline soils. Will be happy fertilizing and regular watering. Used for single plantings and for hedges.

Each of these varieties has its own unique look. The aroma and beauty of the shrub have long captured the hearts of professional landscape designers and gardeners. 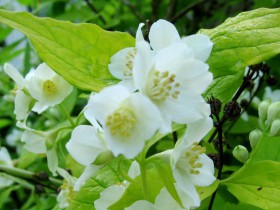 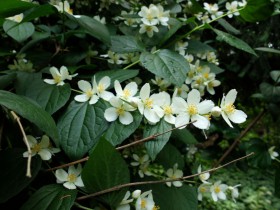 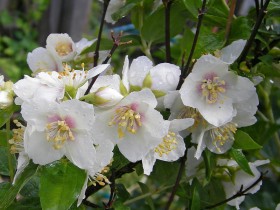 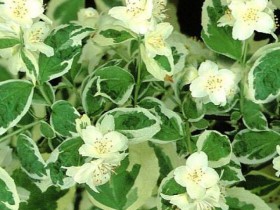 The sort of “Variegata” with variegated leaves. 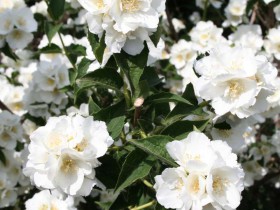 The Sort Of “Alabaster”. 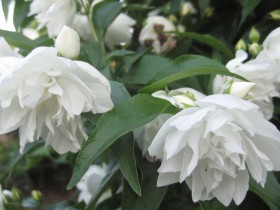 Mock orange in the garden, video