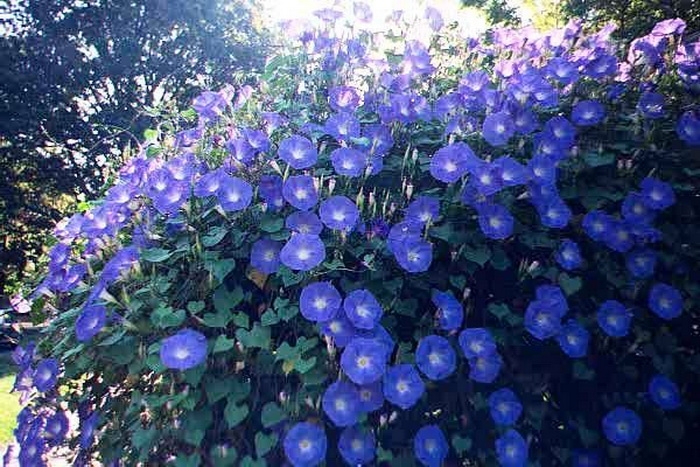 Blue morning glory in the garden.

The Botanical name of the plant comes from two Greek words: "similar" and the worm". So unappetizing Association due to the external similarity of the curled stalk with the worm.

Rod Bunkov has about five hundred species, but in garden horticulture uses not more than twenty-five. Homeland plants – tropical region of the American continent.

In culture, unpretentious flower, undemanding to soil composition, grows well in the sun. Abundant flowering can be obtained by fertilizing with mineral fertilizers with low nitrogen content. An excess of this substance causes the growth of greenery. The vine does not tolerate stagnant water, but in a drought it needs to be watered. Morning glory seed propagated material, it are sown in spring in open ground. Culture gives self-seeding in southern regions. For early flowering can be grown seedlings, but the plant does not tolerate transplanting, you need to do it very carefully, preserving the earth com.

Morning glory good shades gazebo or sun terraces. Thick shoots and large number of flowers-gramophones turns culture into a large green carpet, which you can also cover the balcony or gazebo, but the old dilapidated fence, peeling wall. Bindweed you can get interesting green shapes on the frame or tents.

The floral clock morning glory is a first – bloom plant flowers earlier, than other plants. For this special feature in the UK it is called "morning glory" – "glory morning", about the same name it bears in Japan. During the day long pedicels turn to follow the sun. Flowering period – from July until the first autumn frosts.

Many varieties, bred breeders, differ from each other in color and form of flowers. Classic varieties have a red-blue or Magenta color, now you can find any, including petrogreen, with the contrasting spots and center. New double varieties form multiple rows of petals, there is a very large, to 10 cm in diameter. A wild relative of the crop is field bindweed, people call it the "birch" due to the shape of the leaves. Distributed everywhere – from Europe to the Caucasus, and from Central Asia to the Far East. From the weed difficult to remove, but in its structure it is an exact copy of the cultural Ipomoea. Seeds – small, from one plant you can get them a few hundred.

In the forests of Latin America common morning glory hederacea and pitted. First – pernicious weed in the United States, Israel and the UK, the second is growing in Japan. 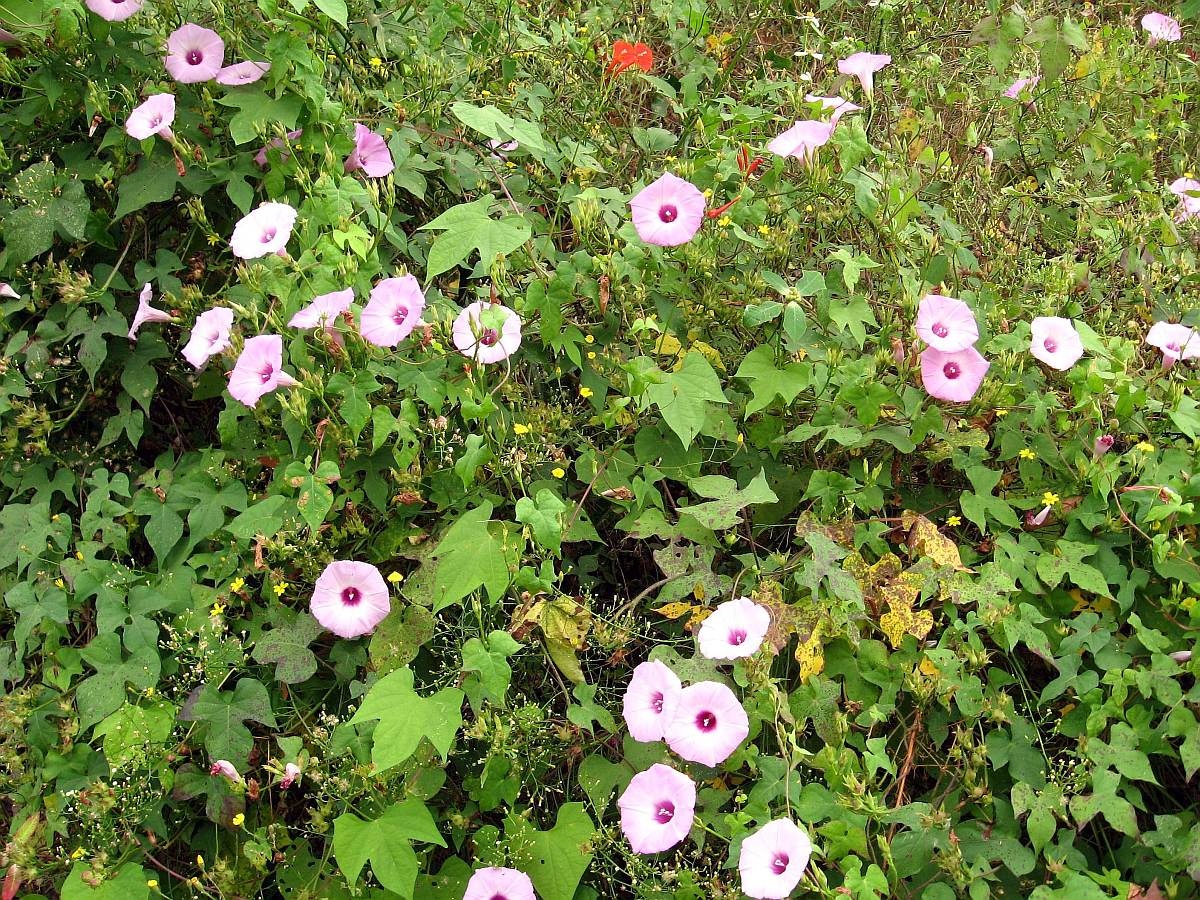 The types and varieties of Ipomoea

Culture known since the late eighteenth century. One species of night-blooming. In the middle zone it is grown, as an annual, hibernates, growth ceases at temperatures below ten degrees. Liana reaches three meters or more height, shoots up to six meters. Leaves trogdolyte, they create a light-tight cover. Seeds have a thick shell and are subject to prior soaking for a day. The water is warm, during this time, the shell cracks and can even appear a little sprouts. Large white flowers of this Ipomoea has a pleasant aroma, they can be grown at home, on the windowsill.

Outdoors the plant is spider mites is affected, have to buy medicines for control of this pest. The plant is gaining weight literally before our eyes, it only remains to have time to build the supports and tie the stems. The buds open in the evening, very fast and at the same time, with a soft rustle, like umbrellas. Sweet almond fragrance fills the garden until the morning, then the flower fades dramatically. In cloudy weather beaters are open all day.

Luniversal morning glory prefers a rich and moist loam, but can grow on other soil nutrients. Responsive to irrigation with warm water, feeding. Seeds planted in may, directly into soil after soaking. In the first three months, the plants grow very slowly. The seeds may not ripen in Northern latitudes, to their receiving branches with large fruits cut, tied in bunches and dried first in the sun, and then in a ventilated area. Scatter the seeds in paper bags.

The summer can be propagated by layering. In the summer shoots, which appeared near the root collar, pinned to the ground, leaving free the top. Shoots rooted within six weeks. Before the frost the shoots are planted in pots, put in the greenhouse or covered with leaves. Overwintered plants can be grafted, they will bloom in mid-summer. Use this type of Ipomoea to planting at the entrance to the house, near the gazebo, the latticed Windows, the vine is often planted near discos and night bars. 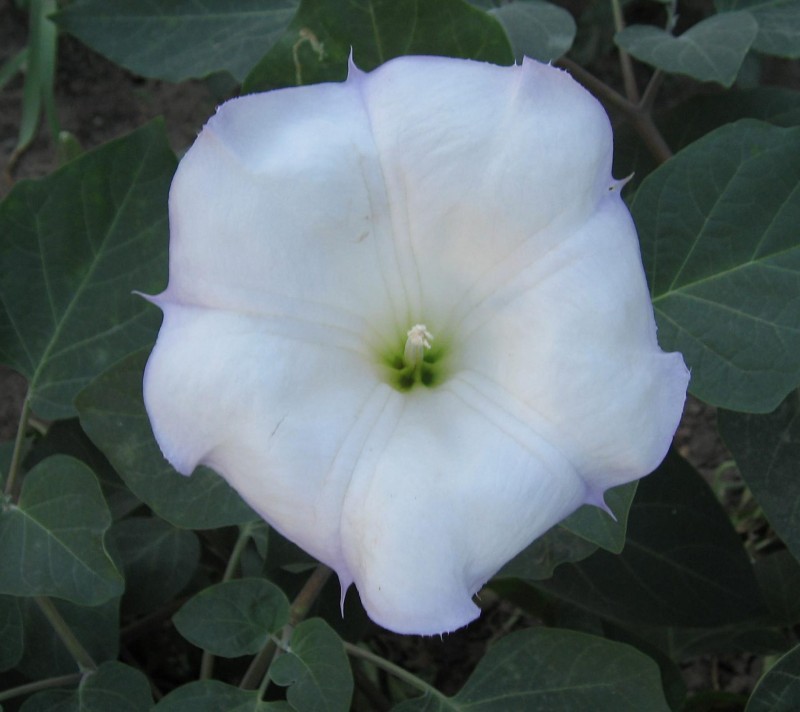 The most decorative and common type of climbing annuals. Blooms from mid-summer to October. In garden plantings widely used varieties:

The birthplace of the variety "Heavenly blue" is the New world, where it is grown as a perennial. In the middle zone of our hemisphere, it is cultivated as an annual plant. The leaves are large, wrinkled, naked, the petioles are long. The flowers are funnel-shaped, collected in bundles, diameter 8 to 10 cm, open from morning till noon. In the sort of culture is known since 1830 year. 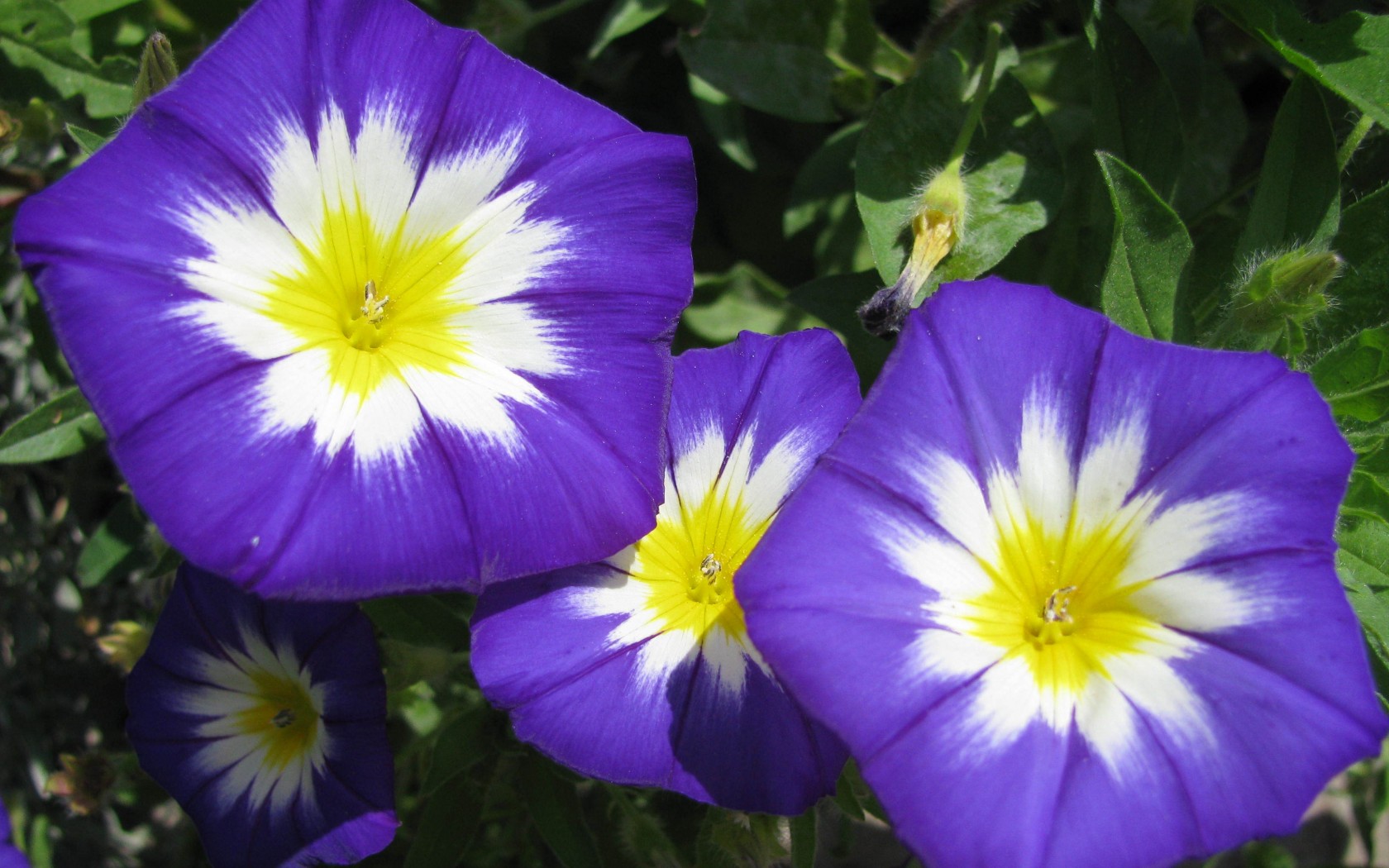 Other names – "morning glory Mine Lobato", "Spanish flag". Motherland – the South of Mexico. Tropical annual with reddish stems up to three metres in height. The leaves are heart – shaped, three-blade, the flowers look like drops, small. Change color: first, they are red, then turns orange, lemon-yellow and creamy-white. Multicolor effect is striking: each inflorescence has flowers of different colors can be more than a dozen. From the open throat visible pistil and stamens. Varieties introduced into the culture with 1841 year, flowering: since the beginning of August until the end of October.

Another name – "star beauty". Vine-annual from South and Central America, height – three meters. The leaves are heart – shaped, flowers – small, scarlet with yellow center. Blooms in June-July, in August, it forms seeds, and vegetative mass blackens. More decorative quamoclit proselochnyy fire red. The morning glory of a fiery red can be sown into the soil in April or may. 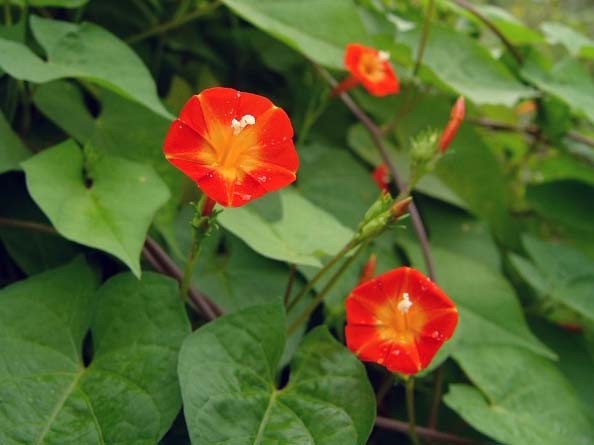 Cypress vine or quamoclit Cirrus came to us from the tropics of South America in the seventeenth century. Herbaceous, climbing plant can be a perennial, and annual, bright green leaves resemble the cypress or fern. Star-shaped flowers, numerous, small, color – Carmine red, white, pink. The plant is pleasing to the eye until late autumn. Planting the seeds in late April or may, a notch, distance between plants – 5 cm. Culture is not tolerated transplant.

Morning glory or quamoclit slaughter, "cardinal vine" is a gentle hybrid, an annual from Central America. Height of shoots – up to five feet, leaves palmately lobed, the flowers were red, similar to a cardinal's robe. Bloom in the morning, flowering from July to September. The species prefers sandy-humus garden soil, the sun. Need tying to supports, watering – moderate, feeding – weekly, until August. May damage spider mites. The seed forms a little.

The morning glory slaughter planted in the middle zone warm in the spring, seeds in late April. Another option: seedlings in boxes in March, pick up and drop to the open area after the frost. Used for decorating walls, create floral pyramids. Cardinal vine looks good in the compositions of the first plan the arched forms. The plant is poisonous. 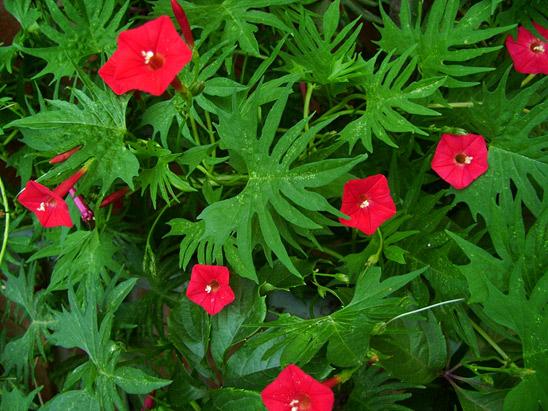 In the photo: morning glory slaughter.

The Japanese name "asagao" – "morning face". A perennial vine, cultivated, as an annual. Large flowers with pink, red, blue, purple and lavender color. Flowers live one day, open in the morning and fade in the afternoon. The plant from the Old world, came to Japan from China in the Nara era. At first it was seen as medicinal, then became a cult. The cult Bunkov in Japan was timeless, in our days morning glories still actively bred in the gardens.

The ancestor of this species was morning glory heavenly blue, the Japanese have so changed the appearance of the wild ancestor, now it simply does not know: hybridization is put on a scientific basis, genotyping DNA, composed summaries of dominant and recessive genes. New items appear each year, the total number of varieties, asagao reached several hundred. They vary in size, the form of leaves and flowers, color. The flowers come in simple and double, leaves – rounded, reminiscent of the maple, ivy, willow, there are zheltolistnye and green and white varieties. If the grower decided to plant a plot in the Eastern style is the best solution, than the landing morning, simply can not find. At home, asagao cultivated as a pot culture on windowsills, terraces. Thin shoots rely on structures made of bamboo. Some forms of sterile, they reproduce by rooting of the shoots.

Thermophilic culture can be grown outdoors in warm regions, near the South side of buildings. The most affordable sort – "Chocolate". 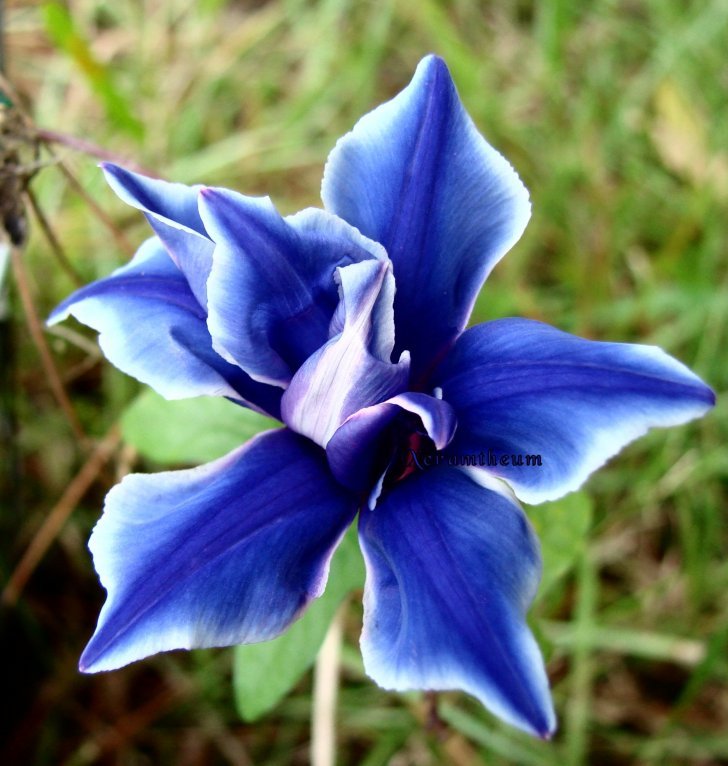 This creeper leaves are very similar to ivy. Flowers – sky blue, red and purple, long stems. Flowers form from July to mid-October. Garden forms have large flowers with white border. The sort of "Roman candy" Paisley, white and green leaves, flowers – dense cherry color with white throat. This variety can be used as a basket plant for protected areas.

The stems of the vines reaching eight metres in length, leaves – lobed, pubescent. Flowers – large, pink, purple, red, blue and dark purple. The inner part of the Corolla – white. Blooms until autumn frosts, seeds – large. Varietal variety is great, there is a variegated and double forms. The most famous varieties:

The General rule of breeding and cultivating

Culture prefers limed soil nutrient, does not tolerate stagnant waters. The vine are grown with regular watering and fertilizing with a low nitrogen content. For all types of morning glories need a support from the fishing line, wires, mesh, wire. Morning glories grow well in large boxes on the balconies with South-East or South orientation.

The reproduction is produced by sowing seeds in a permanent place in may or in peat pots for seedlings in March-April. The ideal temperature for germination is about 18 degrees. Seeds pre-soaked for days. Nephrosclerosis copies prick with a needle and soaked again. Plants do not tolerate transplanting, they rolled over into larger pots, it has to be done twice. Directly into the ground insert rods to support. The distance between vines in a fixed place, from 15 to 20 cm. Reproduction can be produced vegetatively – by dividing the rhizomes, cuttings, layering. 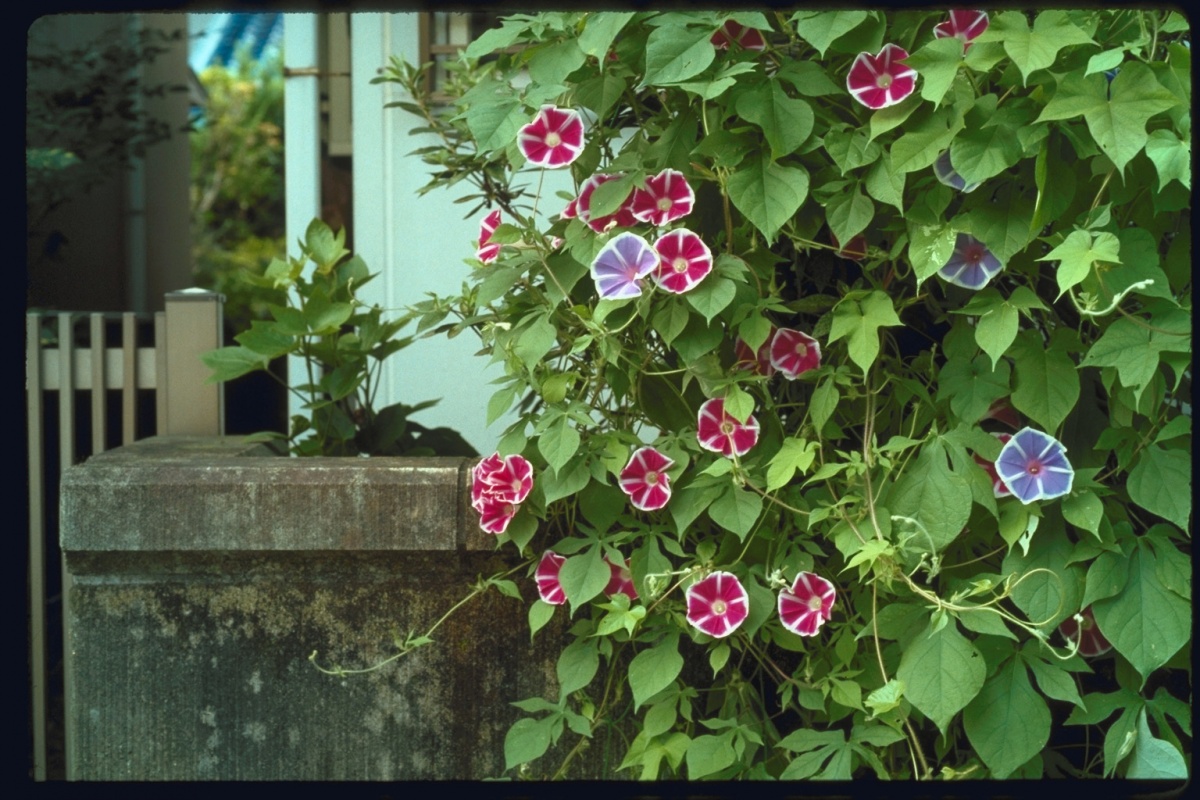 Morning glory near the walls of the house.

The plant can close the excess area from prying eyes, planting them along a chain-link fence. You can cover a house or another building on the South side. Trellis will separate the garden from the garden, economic zone or car Park. Good morning glory near a gazebo with benches. Arches of metal rods, entwined with bindweed, turn a garden path in the green corridor. The same construction can be put at the entrance to the porch.

Ipomoea break space flower garden, it will become more decorative and picturesque. Of culture be interesting the green shapes on the frame, original fountain, the role of water jets will play long stems. As supports can be used dead trees, this option gives a lot of room for a garden of creativity. The branches of the trees from the forest can be attached to a wire driven into the soil pipe, and then decorate them with vines. 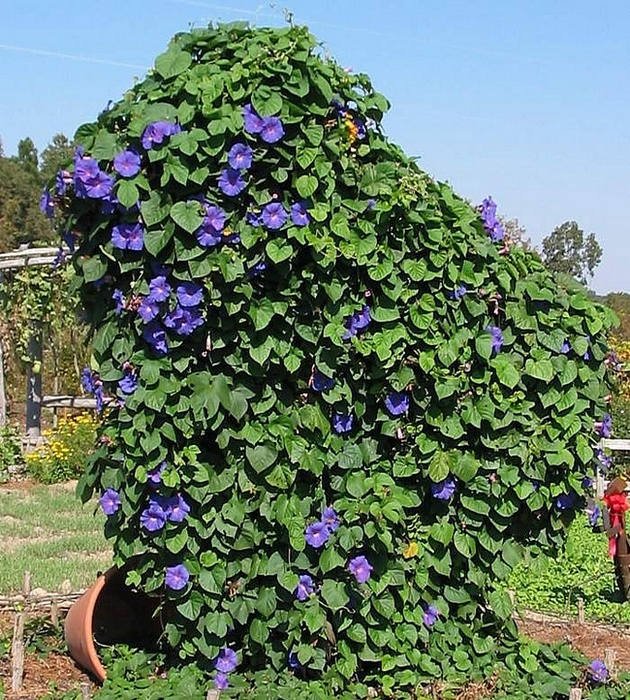 A sign of defeat aphids – yellow leaves and spots. Pests suck juices from leaf plates, secrete honey dew, where the fungus settles. Method of dealing – treatment with insecticide. Deformed leaves may indicate a lack of magnesium in the soil, the plant should be feed. Thin web is a sign of the appearance of the tick, the foliage should be sprayed with water. 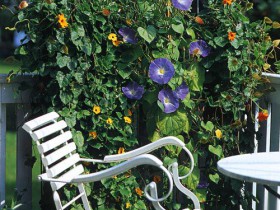 Morning glory in the area. 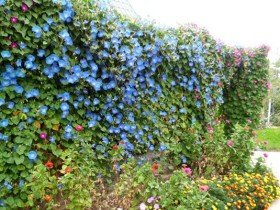 Morning glory at the entrance to the house. 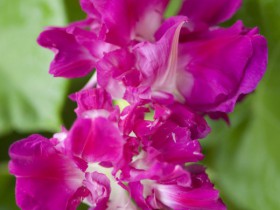 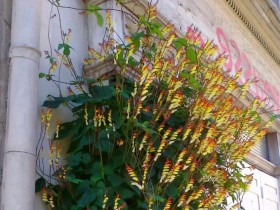 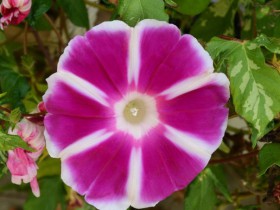 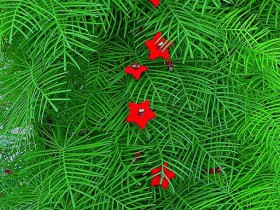 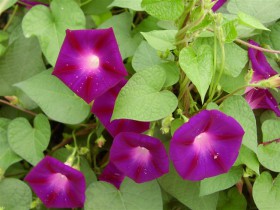 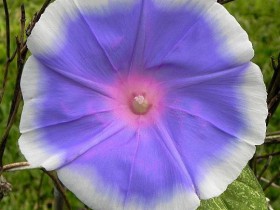