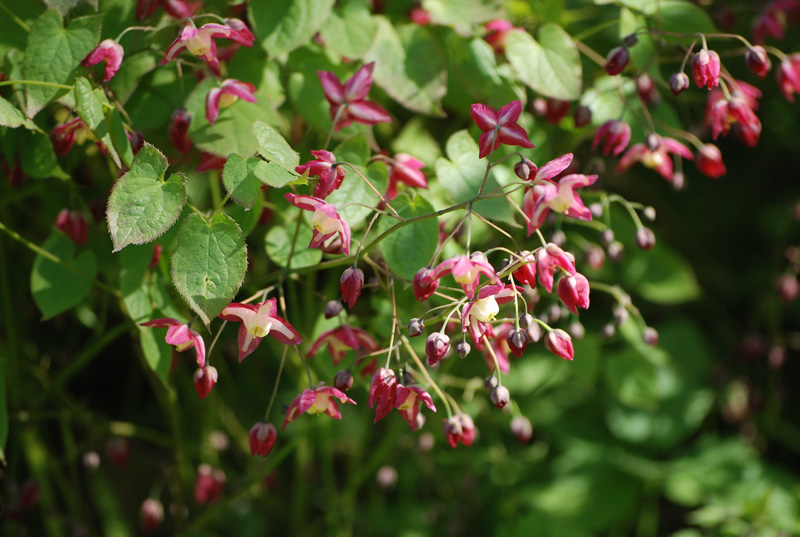 In the photo: Epimedium red.

Herbaceous perennial forms a beautiful and dense cover of leaves on long stalks. The effect of upornosti clumps depends on density of different varieties of Epimedium, some of them more dense, others – loose. Horizontally growing, the branched rhizome is spreading gradually, produces new leaves and dies in the center.

Epimedium comprises about fifty species of deciduous and timeslenin plants, in hybrid varieties the foliage polysilazane. It differs leathery surface, unusual color, bright, pure green, with purple or orange spots, form – cordate or sagittate. Evergreen varieties adorn the garden all winter a beautiful canopy, the change of leaves happens in the following may. Common species shed their leaves after the first frost.

Epimedium flowers appear in may, no other garden flowers can boast such an original form, two rows of sepals, a lush halo. The thin stems create a floating effect over the green cover.

Colors – shades of red, white, yellow, purple. Its decorative properties of Epimedium not lose decades. At the beginning of the withering away of the curtain in the center, plants are best divided and transplanted. 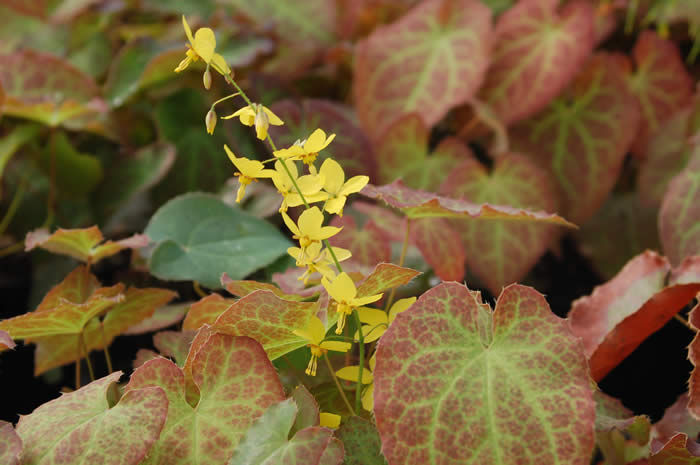 Epimedium, Parrallel, the sort of “Mistelbach”.

Epimedium is not too common in horticulture, although the plant deserves wider use in the design of areas. It is a docile culture, able to create a very effective covers and accents. Today, landscape design is actively used these types of Epimedium, as: 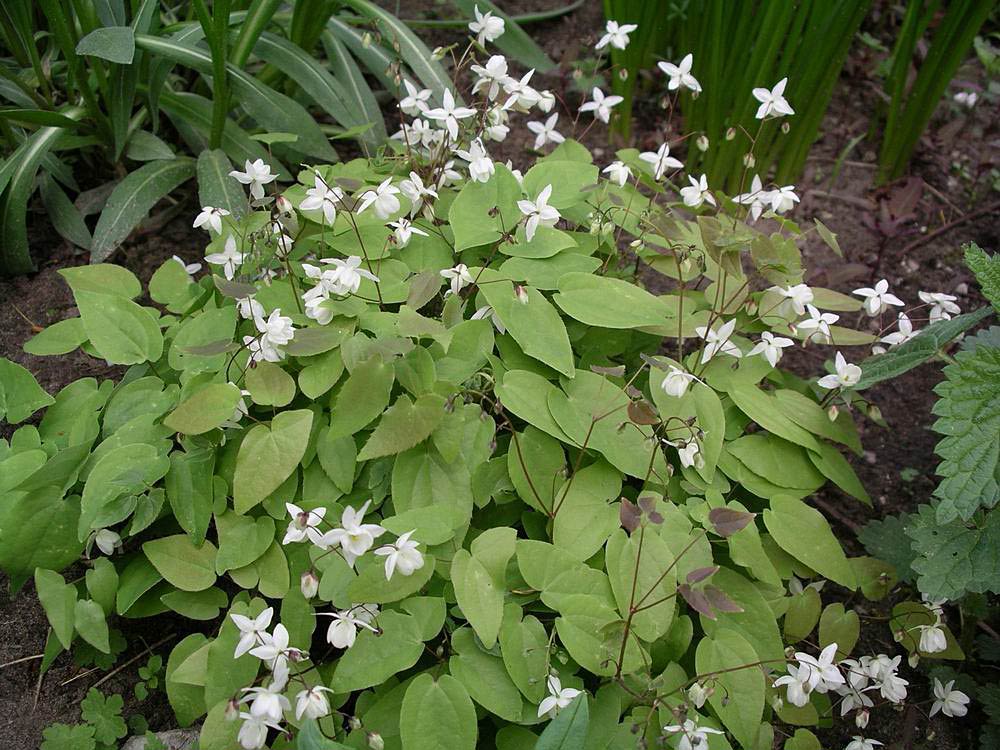 Povorotny used for create natural carpets under the large trees and shrubs, as well as the natural arrays. Culture decorate the shady plot, North side the Alpine slide and rockeries. The gourd not only well fills the soil, but also acts as a transitional form in the decorative garden compositions, creates original textured spots in the glades and lawns. Plant-partners: fern, Primula, host, tiarella, lungwort, Primula, Aquilegia, melkolukovichnye of culture. 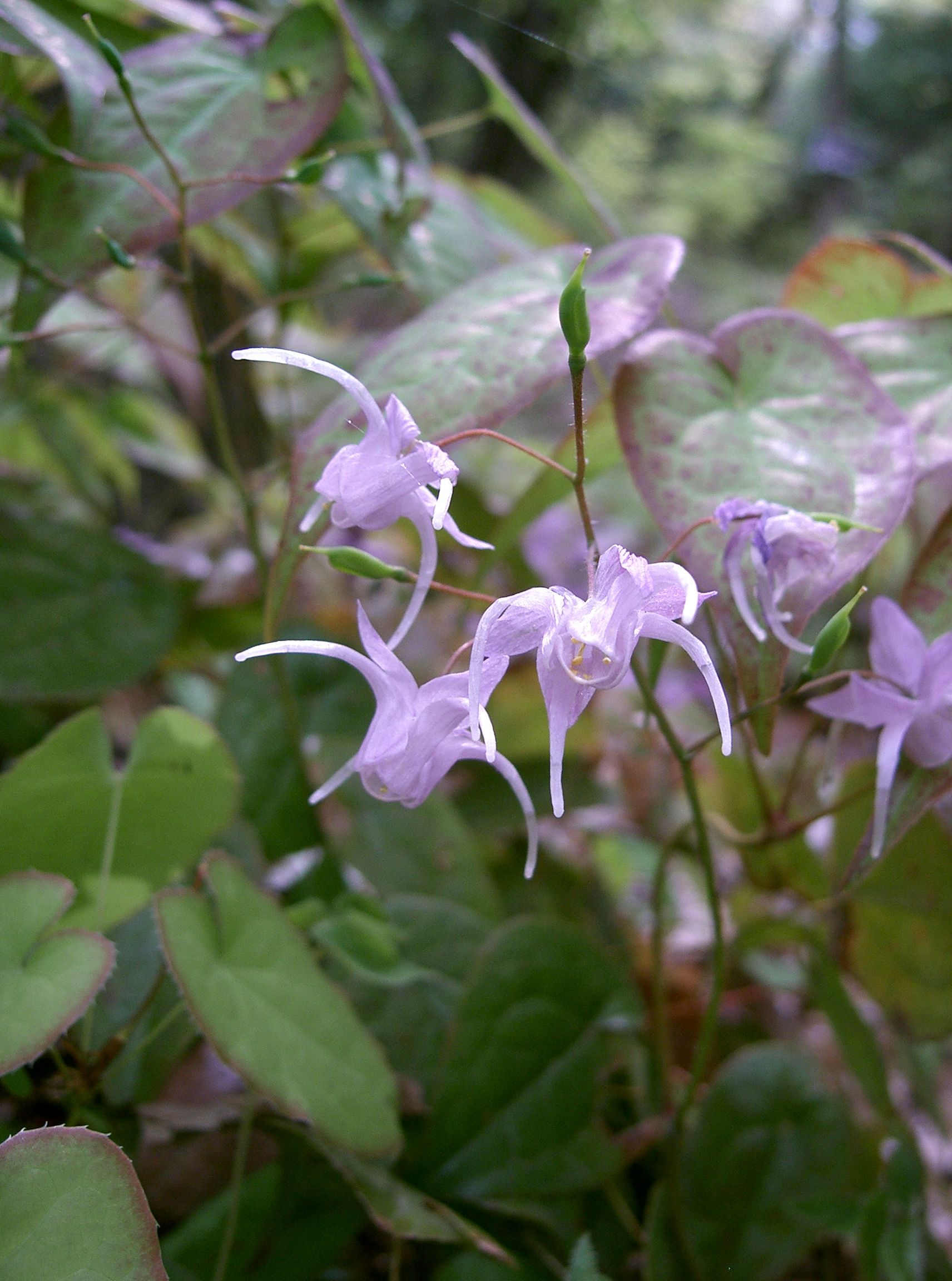 In the photo: Epimedium grandiflora.

Undemanding perennial adapts easily to different light conditions. The best gourds bloom in partial shade, in this case, and the foliage does not lose its density and attractiveness. Culture loves the neighborhood shrubs and trees, covering her from the scorching rays. Epimedium do not like excess moisture, waterlogging, cannot be placed in areas with close groundwater. The best option is loose and permeable soil with clay or sandy texture, with a high content of organic matter, manure. Preferred neutral acidity.

When planting the rhizome gourds bury five centimeters, the distance between the seedlings from 35 to 40 cm. During flowering the plants need watering. Epimedium does not require intensive fertilizing, mulch for winter driving procedure according to at least one feeding a complete mineral or organic fertilizer in early spring is enough. Epimedium is capable of becoming itself a source of fertilizer for growing next crops. Dead leaves act as a mulch and source of nutrients. Both of these functions perform well as evergreen, and deciduous varieties.

Gorjanki not afraid of cold, but do not tolerate snowless winters. In autumn the plants must be protected from unpleasant weather conditions, root system covering a canopy of leaves, creating a compost protective layer. If the plant is young, not zoned, sineserye varieties not only mulched, but and covered with dry leaves. This shelter is removed immediately after the snow cover.

Evergreen gorjanki shed leaves on their own in early may, the process is slow, blooming young leaves is delayed. After the winter timeslenin of Epimedium better to remove leaves manually, to encourage fast growth and flowering. Leaf pruning is carried out after the snow, mulch is not removed until the danger of night frosts.

Epimedium grow well and begin to form a dense cover from the second year after planting. Plants propagated from pieces of root, this procedure is carried out in early September or August. From the roots separate segments with two or three buds. Separated by planting material mulch, dry leaves and compost.

The plant can be propagated by seeds, but they require tempering. At the beginning of the stratification of the seed material is kept at a temperature of from 15 to 20 degrees for three weeks, then a month at two-five degrees.. At the stage of seedlings Epimedium special efforts will not bring, but it will bloom pretty late: after three or four years. Distance between plants – 40 cm. 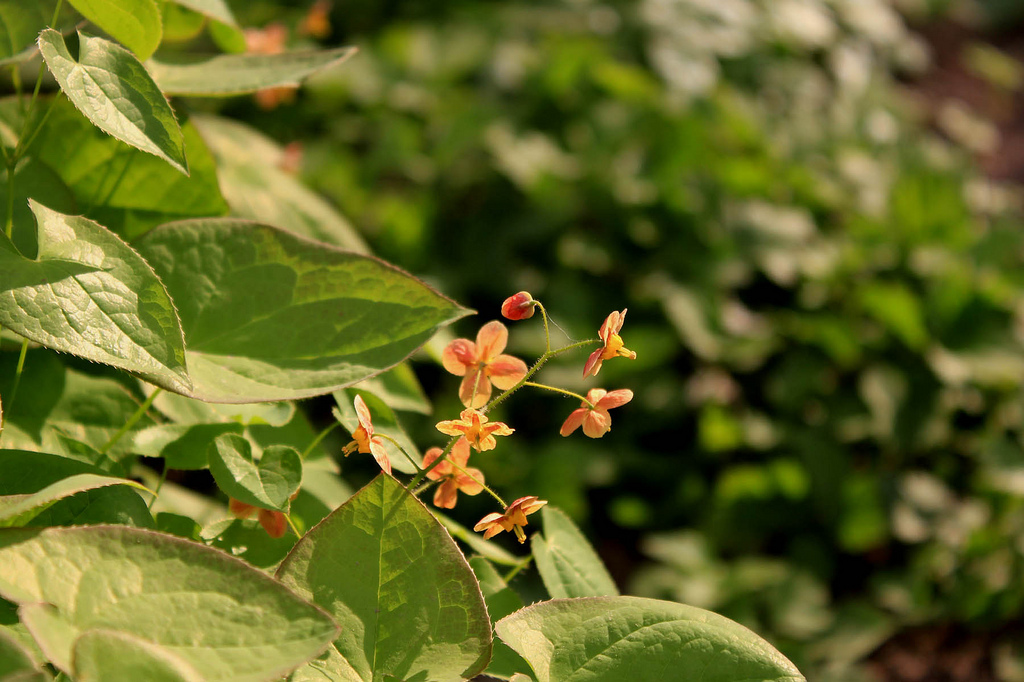 Epimedium not need protection from pests and diseases, these plants are virtually immune to the fungi, and to infections. The only enemy – slugs, eating young leaves. Pests are harvested by hand, put traps, use straw mulching.

Photo of different species and varieties of Epimedium 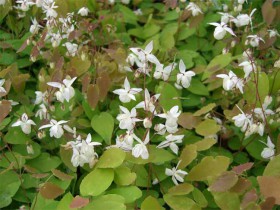 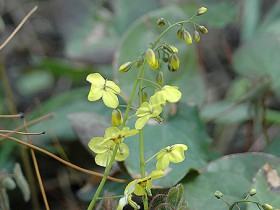 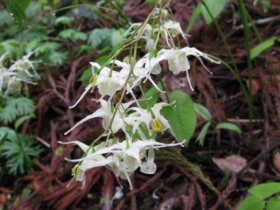 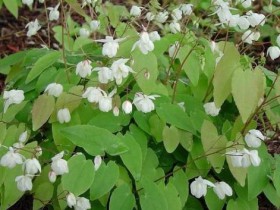 Epimedium lush, the sort of “Niveum”. 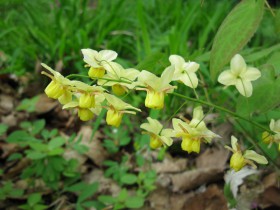 Epimedium colorful in the garden. 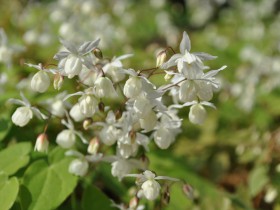